Evening all! I hope that these in-between days are treating you well. I've been having a lovely time. Nic and I had a little potter around the shops on Boxing Day before going to have lunch and a Father Ted marathon with friends. I spent yesterday sewing and watching films - Serial Mom and Jack Ryan: Shadow Recruit (I know, I know, but they were both brilliant) and today, Nic and I went for a very long walk and a pub lunch and we stocked the fridge with champagne for the rest of the week. Now we're back on the sofa and Nic is watching And Then There Were None on the BBC iplayer. This is really living!

As I said in my last post, I'm trying to catch up on a backlog of sewing and knitting projects - so here's something else that I finished a little while ago. It's another Andi Satterlund Chuck sweater. I've worn my green one quite a lot since I finished it and I enjoyed knitting it so much that it was pretty obvious that I was going to make another one. 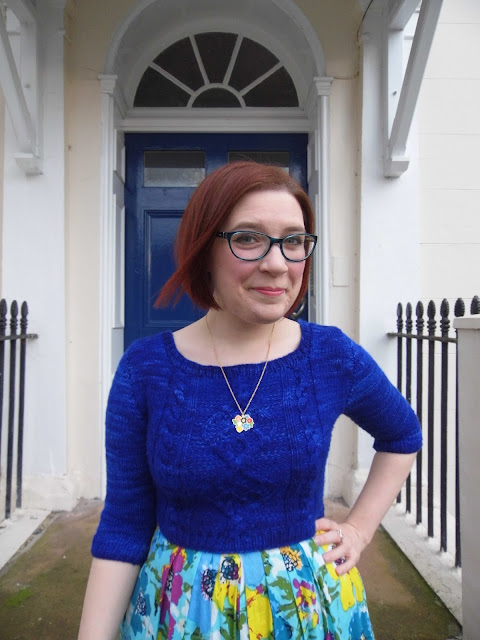 Isn't the yarn amazing? It's Malabrigo Worsted and the colour is called 'Azul Bolita' and, somewhat predictably, I bought it from Wool Warehouse. I love the colour a lot, because it's clearly TARDIS blue, which is very cool even though I have basically totally lost patience with Doctor Who now. The yarn was also very enjoyable to work with and lovely to wear - it's dense and doesn't make a very drapey fabric, but it's not at all itchy to wear. I really like the Cascade 220 Aran yarn but find that it makes my arms itchy by the end of the day.

ANYWAY, the jumper. So, I cast this on sometime in November. I was able to knit the body fairly quickly but I made the mistake of knitting the sleeves on the train after stressful work days and I ended up making a total hames of them. So I ripped both of the sleeves out and re-knit them when I was in a better, more chilled out place. Knitting when you're tired and angry isn't the best idea: who knew?! 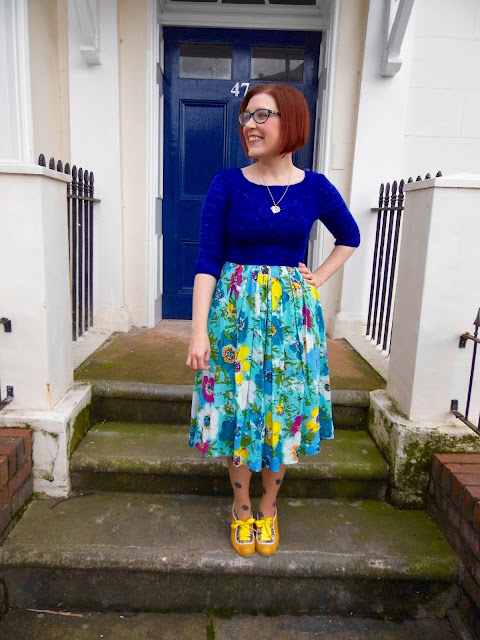 For some reason I can't remember now, I knitted the waistband ribbing and the neckband ribbing a little bit shorter than on my green Chuck and I kind of wish that I hadn't. I love the finished jumper a lot, but I do think that the neckline would be better with slightly deeper ribbing. But, eh, whatever. I still love it.

The Malabrigo yarn has a slightly variegated colour - I guess because of the way it is dyed - so the cable pattern across the front of the jumper is maybe slightly obscured by this - the texture of it is not so apparent when the colour variation in the yarn creates a textured look as well. So that's something you might want to consider before pairing this yarn with the pattern. I like it though - so much so that I am in the process of knitting another Malabrigo Chuck, but this time in pink. It really is lovely yarn to work with and wear.

Ripping back the sleeves on this was kind of a pain but it was worth it - I've worn the jumper quite a bit since I finished it. I wore it on Christmas Day and Boxing Day! 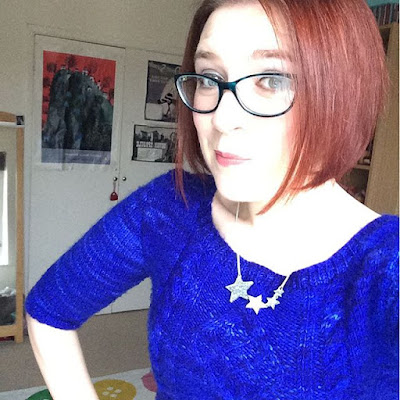 Here's me wearing the jumper on Christmas Day when my hair looked much better than it looked when I tried to get proper photos of the jumper on Boxing Day. Damn you, hair!

So anyway. It's good to have a blue jumper. It helped me to remember where I've met Sister Assumpta before. You know. I stayed with her in the convent back in Kildare. And then I was hit by a car when I went to the shops for the paper. And then I won a hundred pounds with my lottery card. And wasn't I accidentally arrested for shoplifting? They had to come down to the police station to get me...and the police station went on fire, and I had to be rescued by helicopter. And then I fell out of the helicopter over the zoo. And the tigers! Anyway, I was wearing my blue jumper at the time.

Anyway lads, that's me now for the evening. Night!
Posted by Roisin Muldoon