Evening pups! What's happening? Right now I feel like I'm living my best life: Nic and I are watching an episode of The Fugitive, I have a glass of champagne on the go and I'm full of roasted chickpea and broccoli burritos. Yassssss! Our friends Amy and Barney bought us the Thug Kitchen cookbook for Christmas on the basis that it is very sweary and holy shit, the recipes are awesome. Happiness! I've had a lovely day of pottering around and sewing. Being on holiday clearly suits me.

As I said, I've been sewing today (yet another McCall's 6696) and last night I finished the pink Chuck sweater I mentioned yesterday, so I'm feeling particularly productive at the moment. Less so on the blogging front, as tonight I am going to show you a dress that I made in October but never got around to photographing. This dress: 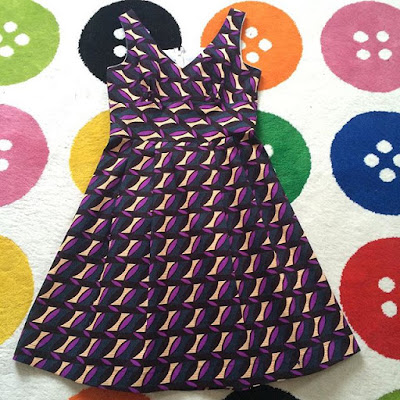 I do have photos of it on me too, but I really like how this dress looks flat! So, it's another New Look 6776, and I made it very soon after making the Ball and Chain dress - like, I think I made it in the same week? So, with this one I wanted to have a go at adjusting the pattern by narrowing the midriff band slightly to see if the waist hit me at a more flattering place. It's only a slight difference and I'm not sure that it wasn't better as it was, although it is honestly difficult to compare as the way the dress looks is so different because of the difference in the fabric. I bought this lovely wax cotton when Nic and I were in Paris in August. I bought it in a shop called Festival Tissus, which is on Rue Pierre Picard in the 18th. It was quite a strange little shop where, although the fabric was all in 6 yard lengths, the owner seemed reluctant to sell you the whole yardage. It was kind of a strange transaction, although the man in the shop was very nice. Anyway, I bought 3 metres of this thinking that it would be nice for an autumnal dress and you know what? It is! I've worn this dress a lot since I made it and most commonly like this, with ankle boots. 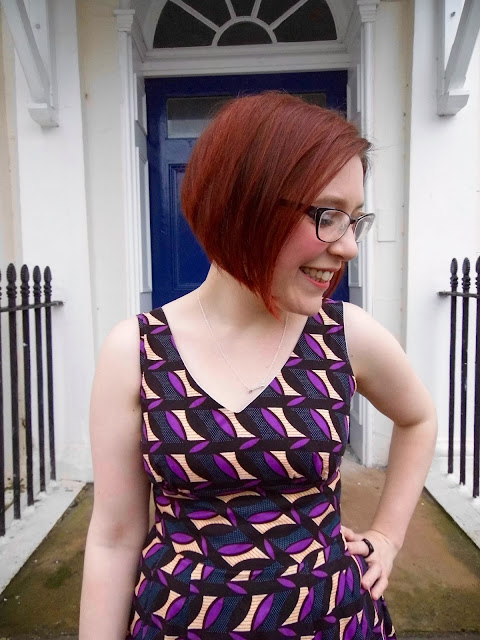 As with the Ball and Chain dress, I really like the way the bias-cut midriff looks with a geometric print like this. And, as you can see, I decided to have the shapes running in the opposite direction on the bodice to on the skirt, just to give this dress an extra bit of optical illusion chic.

I'm still not sure how I feel about the fit of this dress - it still feels like there's a bit too much fabric in the curved midriff. That said, this has come in handy in these post-Christmas days - there is definitely room there for a bit of Christmas indulgence! Judging by how often I have worn this dress in the last few months, though, it's definitely a winner. I might have to make another one. 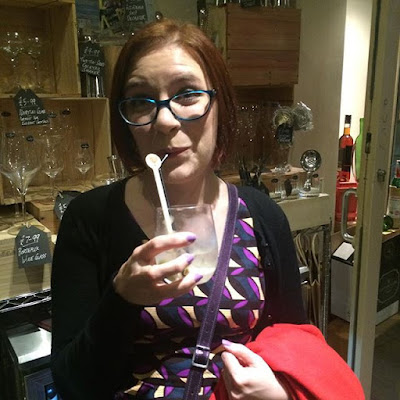 The first time I wore it was to a gin tasting at my local wine shop and I subsequently wore it to go to a gin bar in Glasgow. So it's put in some good work already. Nice one, dress! If I were wearing it now, I'd honour it further by drinking more gin, but I'm not, so I suppose I'd best carry on with the champagne.

I'll be back tomorrow with another dress. Lads, it's a good one. So I'll see you then. Bye now!
Posted by Roisin Muldoon