You can forget about Icey T and Scoopy Scoopy Dog Dog.

Hello everyone! I've managed to rid myself of the lurgy that was plaguing me at the end of last week: after a stressful week at work, maybe it was 90% feeling exhausted and angry. Whatever it was, I flew back to Northern Ireland for the weekend and I'm feeling much more like myself now. It was very good to go home and see the family before Christmas as Nic and I will be spending Christmas in Leamington again this year. As always, it was great craic hanging out with my two-year-old nephew Joe, who wanted to show us both that he knew his alphabet, that he could count to ten and that he knew all of his colours. The delight on his cheeky little face as he pointed out that something was purple was enough to chase away any residual work stress. There is also a lot to be said about the stress-relieving properties of cuddling a small dog. 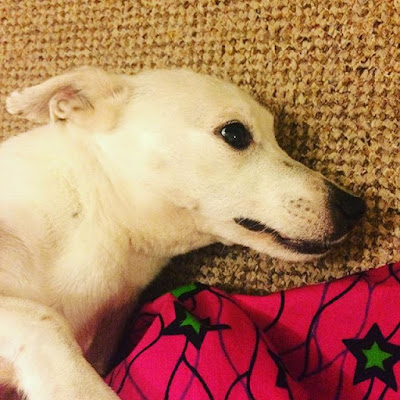 There is also a lot to be said for the stress-relieving properties of leaving it all behind and flying home to your own little flat: 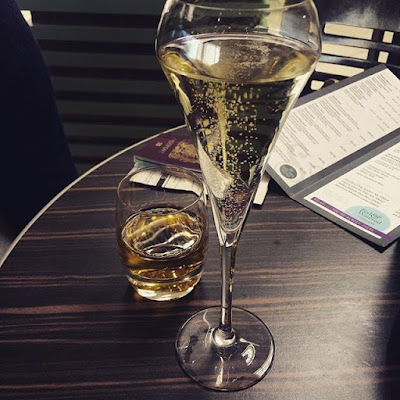 It was a good break and now I'm on the downhill slope to a proper break over Christmas, so I am definitely feeling more chipper. I am very much looking forward to a few weeks of sleeping, eating, sewing and knitting!

I actually have a knitting project to share today. This has been waiting to be blogged - I actually finished it six weeks ago! I'm not sure why it's taken me so long to blog it, but there we go. The item this time is the Hetty cardigan by Andi Satterlund, which I decided to knit in navy. I bought some Drops Big Merino from Wool Warehouse for it and away I went!

This cardigan feels like it took forever to knit, mainly because I had to frog that shit. TWICE. I'm not even kidding. The first time was mildly annoying because I was a decent way into the body but the second time was an absolute WOUNDER because I had bound off the body and was picking up the sleeve when I realised that I had managed to twist the front left side when I was joining the back to the front, and I had ended up with some sort of mad cardigan mobius strip.

I mean, SHIT. Isn't that annoying?! At this point I could probably have unravelled back as far as the armholes but I was so pissed off that I unravelled the whole damn thing. I did think of knitting something else entirely, but the dream of a navy Hetty wasn't going to die that easily so I cast it on for a third - and thankfully, final - time. After that it was grand! Fuck, it had to be, otherwise there was going to be some smoke in the city. 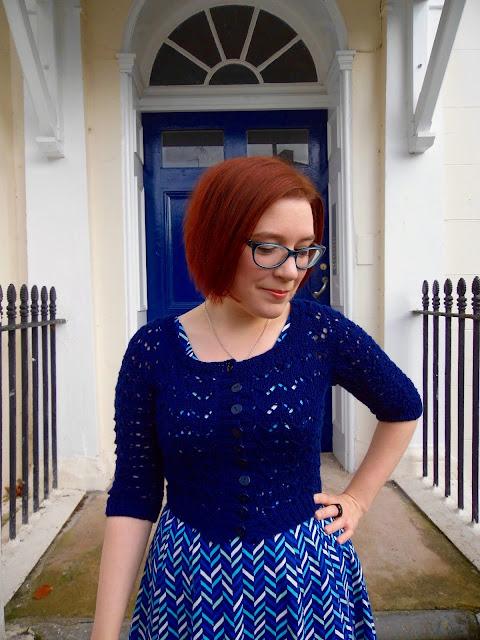 Navy Hetty cardigan, worn with the Ball and Chain dress

Hetty is a lovely pattern and not at all difficult, despite the trouble that I had with it. After three attempts at it, I was very well acquainted with the pattern repeat. Even without that, though, it's an easy enough one to memorise. I was sort of dreading casting on the sleeves, where you need to keep the repeat in mind alongside using short rows for shaping, but they're not too bad at all. 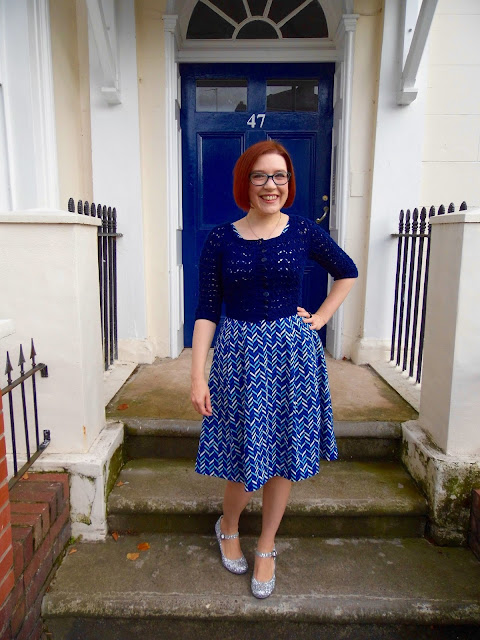 I have worn the finished cardigan a lot since I completed it - I definitely had room in my wardrobe for a cropped navy cardigan! I really like the pattern and I'm very pleased with the quality of the Drops yarn that I used. It is dense and springy, and it hasn't pilled or fuzzed up in the wearing. I was wary of it stretching out too much with blocking in the way that my pink Audrey in Unst did, so rather than wet-blocking this I gave it a fairly gentle steam blocking. I will use steam to wash it too, I think. 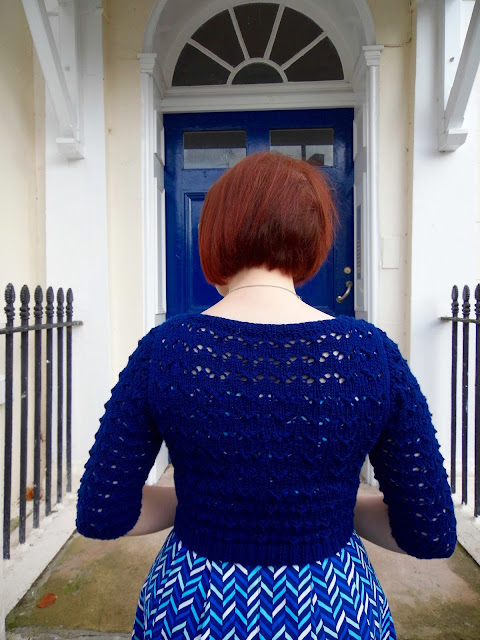 Here it is from the back - I really like the way the lace pattern looks across the back.

It was worth persevering with this cardigan, but it isn't always - the purple cardigan I cast on while I was in Glasgow has since gone in the bin. The yarn fought me all the way - it was tangly and knotty on the skein and kept sticking to itself - it was horrible! I had to unravel one of the sleeves - I had knit it the evening that my granny died, so it was full of mistakes because my mind was elsewhere - and the yarn ended up snapping in the armhole stitches, and it was looking impossible to fix. Everything about the cardigan felt like it had bad juju at that point, so I gave it up as a bad job! In knitting, as in life, it is good to recognise that something isn't working for you.

But back to lovely Hetty - as I said earlier, I have been wearing it a lot and it even got a compliment from my dad when I wore it in Belfast a few weeks ago. High praise indeed! 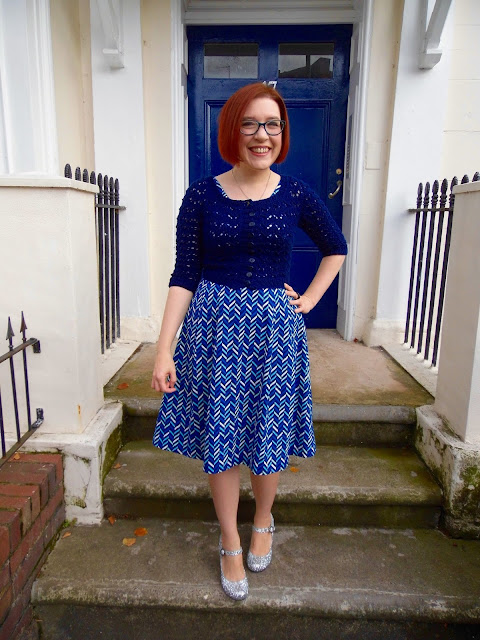 So anyway, that's the craic with Hetty. I have just finished another blue knit - a Chuck sweater - and am about to cast on another one in bright pink. I'm very predictable but, oh well. You knew that anyway.

Right now. On the cards tonight is Harry Potter and The Philosopher's Stone, a mince pie and maybe even a gin and tonic. Until next time!