I hope my legacy is a Sesame Street-type TV show that promotes illiteracy in girls.

Hello! Here we all are now, all the lads. I hope you've all been having a good weekend - I have been having a very relaxing one. Last week was incredibly full, work-wise. After the job interview on Monday, I had a standard-issue busy Tuesday and then I was off to London early on Wednesday morning to spend the rest of the week in all-day meetings. Staying in London for half the week is not my favourite thing to do, but it wasn't so bad this week as I had a comfortable hotel room and I was joined by Nic. He was also working in London and being able to spend the evenings with him made the whole week that bit more bearable. So did going to Amathus after work on Thursday night and buying a bottle of gin, like: 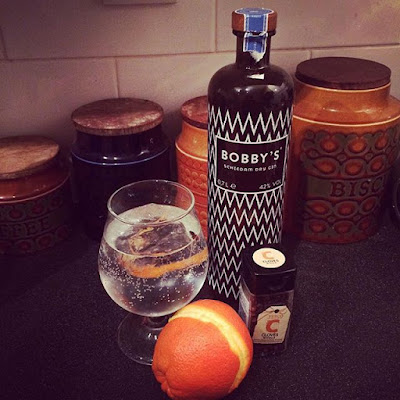 Nic and I got home late on Friday night and I spent yesterday pottering around, getting the flat sorted out and sewing. Today we have done much the same - we put up some more retro tomado shelves (this time in the living room) and now I'm half-watching an episode of Rebus while the dinner cooks. Ken Stott as Rebus, because I have always found John Hannah unaccountably irritating. I'm enjoying it: it's less like a Scottish Morse than I thought it would be, but that's not a bad thing. Every time Ken Stott swears it makes me laugh, and you can't beat the beautiful Edinburgh scenery. I love a good 90s crime show, especially when it was made in 2006.

I have another busy week ahead; January is pretty relentless in my job. But that's okay, because I have fun things to look forward to, delicious gin to drink and a new dress to wear. As I said up above, I spent yesterday sewing and here are the results: 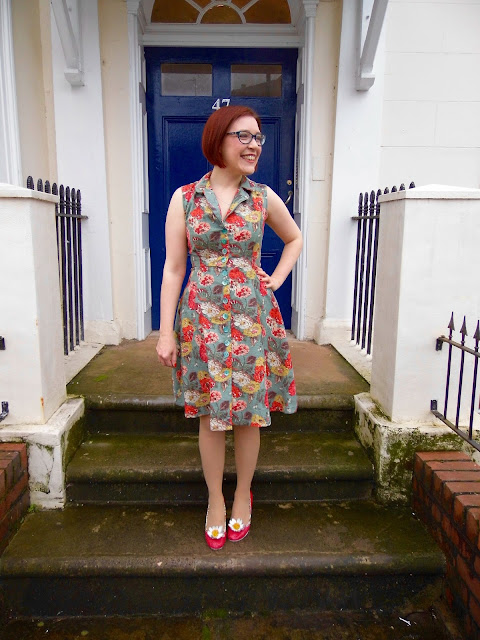 It's another Sew Over It vintage shirt dress. I've been meaning to make another one ever since I made the Larry Vaughn dress last summer but I never got around to it. Not sure why, because I love that dress and really enjoyed making it. I had trouble getting to sleep on Friday night - I think it's because I was a bit over-tired - and as I was trying to sleep I remembered this fabric and it suggested itself to me as a good match for the vintage shirt dress. 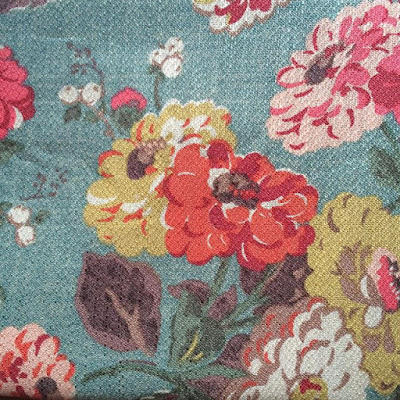 The fabric is Cath Kidston barkcloth. I think the print is called Autumn Bloom, and I bought it on ebay. The barkcloth is really lovely to work with - it drapes well, presses well and stitches just disappear into it. Having used it previously on the Bearaigh dress (and having bought a few dresses made from it from their shop) I know it holds up well to washing. It's fairly thick as well, so despite being sleeveless, this will be a good dress to wear during the rest of winter. 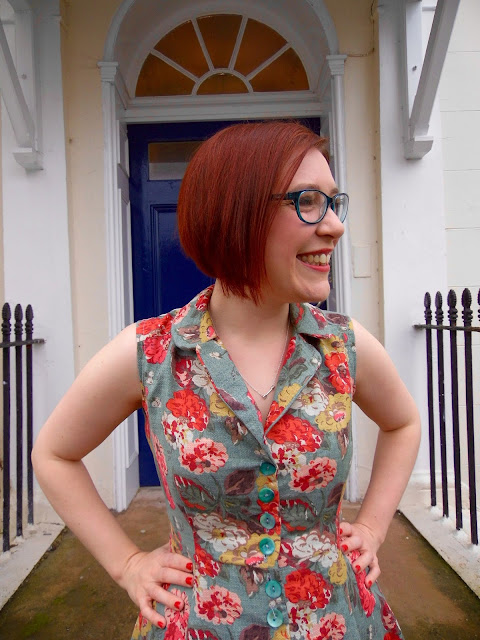 While I am very happy with the finished dress, I'm not sure this fabric is 100% the best choice for this pattern. It's pretty thick and, as you can see from the photos above, getting the lapels to lie nice and flat is a bit of a challenge! It's a minor issue and it might not stop me from making another barkcloth shirt-dress if the right fabric came along, you know? When I finished the dress last night I felt a bit meh about it, but it was 11:30 and really dark - when I put it on in daylight I was pretty damn happy with it. I really like it!

As with the Larry Vaughn dress, I cut the size 8 and, as I said before, this pattern has a considerable amount of ease built into it. There's a good reason for that - Karen put it more succinctly than I could - but there is still more than is to my liking. With the Larry Vaughn dress, I ended up going back and taking it in at the sides, and I didn't want to do that here. So I basted the side seams and, when the rest of the dress was constructed apart from the buttonholes, I checked the fit and sewed it up. I ended up using a 2.5cm seam allowance on the side seams, but I made sure to check the fit sitting down as well before I committed to anything! I also lengthened the skirt by 2 inches and I used 12 buttons rather than the recommended 8. 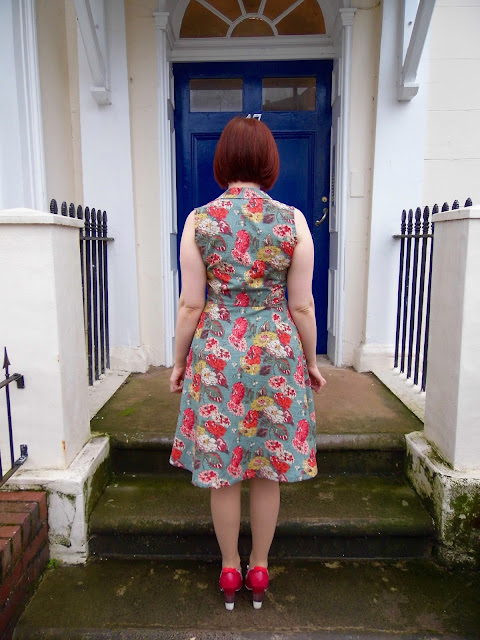 Here's how it looks from the back

Slight issue with the collar aside, I am very happy with the dress. This is such a great pattern. I love the shape of the bodice - the pleats give it a softly structured look that I love, and the same is true for the skirt. As the name suggests, it has a vintage appeal, but it's not costumey at all. When I finished the dress last night, I wondered if it was too twee, but I think it's good. 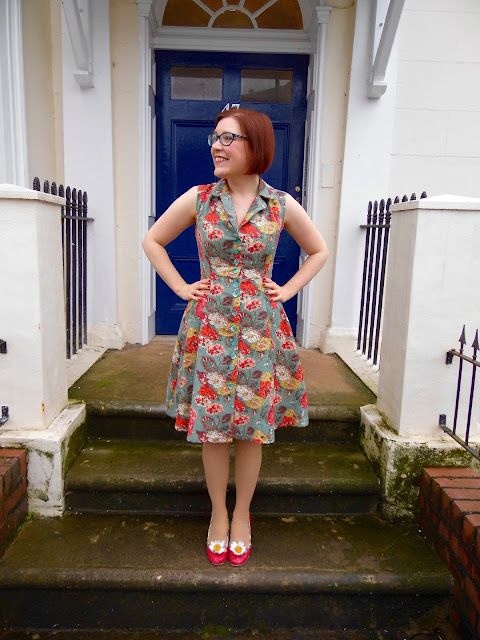 So, that's the craic there. Obviously I will be keeping an eye out on ebay for more Cath Kidston barkcloth and the success of this dress has led to me mentally pairing it with a few other fabrics in my stash. There will definitely be more of these in my future!

So, I have more London days this week but no more all-day meetings until next week. And by then, January will be over. I mean, February is worse (I hate February: it sucks) but STILL:

Okay, now. That's all the craic I have left so I'm going to go. Laters.
Posted by Roisin Muldoon