You can try to change New York, but it's like Jay-Z says: Concrete bunghole where dreams are made up. There's nothing you can do.

Hey you guys! How's the form? My first week back to work has been grand, if a little depressing that it's so cold and dark and, you know, January-ish. My body responded petulantly to being back at work by getting sick, but not sick enough to justify not working. I can only assume that I'm allergic to doing anything other than watching Netflix in pyjamas. It's grand now though. I'm feeling better and Nic and I have had a lovely weekend - we had a quiet Friday night, spent last night round at our friends' house and today we put up some of these awesome tomado shelves in our bedroom. I know, DIY is boring, but it didn't take long and they look great. So, yay!

It has been a good week, though. On Monday, Nic and I booked a holiday to New York City! We're going at the end of May for two and a half weeks, and we're staying in a lovely apartment that's on the border of Prospect Heights and Crown Heights in Brooklyn. I'm super psyched as we've wanted to visit New York for absolutely ages, and we'll have loads of time to really explore. Hopefully having this super exciting holiday to look forward to is going to make the next few cold months bearable! At the moment I don't have a long list of things I want to do, but of course I'm going to be reading up lots over the next few months.

So, yeah, that's the craic there anyway! I haven't done any sewing this week - I was too busy being ill and stressing about finding the right airbnb apartment to stay in (I sent approximately 7,000 messages to lovely Sonja bugging her about which areas are good to stay in - I definitely owe that girl a drink or two.) I did manage to get lots of crafting done during my long Christmas break though, so here's the last thing I made in 2015: 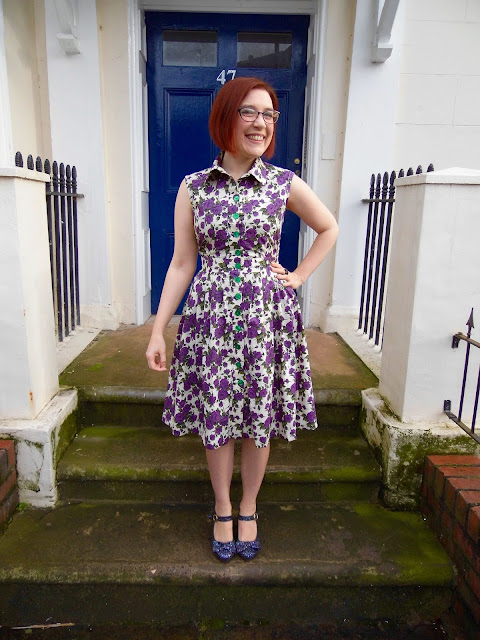 Hey, another McCall's 6696 in Liberty fabric. Predictable, your name is Roisin. Whatever though, seriously, because it's a perfect match and I love this. LOVE IT. Emmie alerted me to this fabric on eBay in about March of last year and I immediately bought it. It was listed as lawn, but it's actually poplin - now, this would have probably been disappointing for some people, but I am all over the Liberty poplin and it's the perfect weight and hand for this pattern. I bought the fabric with the express intention of making a McCall's 6696 but for some reason it took me months to get around to actually making it. It wasn't that I had changed my mind about pattern and fabric, I just kept putting it off. Anyway, as you can see, I finally made it over Christmas. 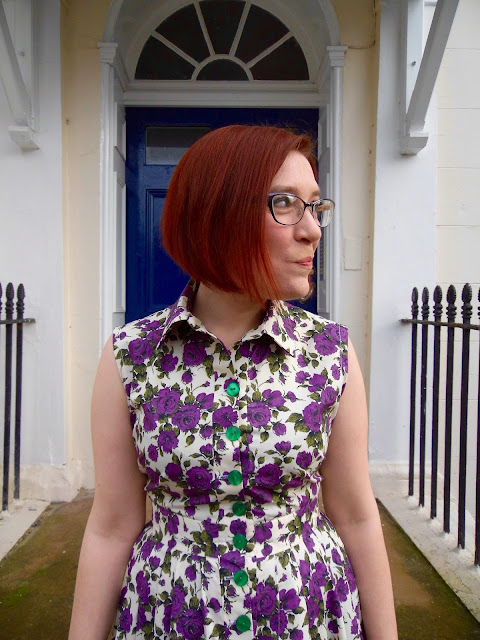 I have nothing new to say about this pattern. I'm really happy with the fit with the bodice shortened. As with the Chronic Town dress, I sewed the buttonholes horizontally and I added in the hidden button at the waist. I'm considering moving the buttons so that they're off-centre to reduce the slight pulling on the button band, but it's no biggie so I'm not in a massive rush.

As you can see, I used fairly bright green buttons on the dress. It's brighter than the green of the leaves, so it's maybe not quite the right shade for the dress? I quite like it though - I think it adds an extra bit of retro charm to this dress. Anyway, again, I don't care because I really love this dress and I am very happy that I finally got around to making it. This pattern is the best. I like it so much so that I have bought myself a backup copy of it as I didn't trace the original. That's perhaps a little bit obsessive but, hey, you know that's how I roll. 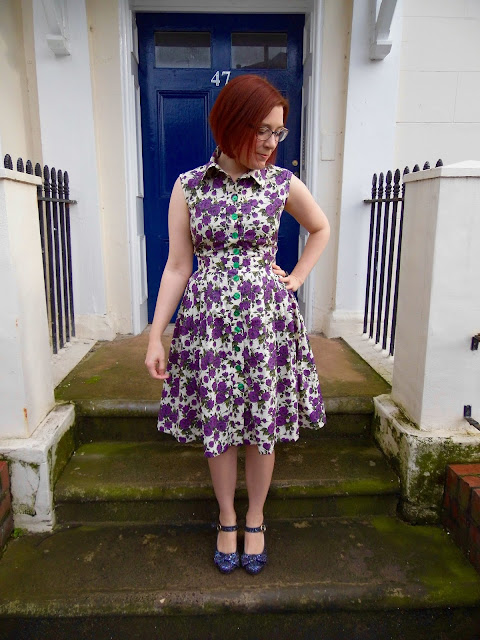 Nothing more to say. I just liked this photo.

The weather has turned pretty cold now, so I probably won't wear this dress very much until it warms up a little bit but I'm glad it finally made it off my 'to make' list.

One thing that is going to make it a little bit easier to wear is that the one of the first things I made in 2016 is a purple cardigan to wear with it - an Andi Satterlund Miette cardigan: 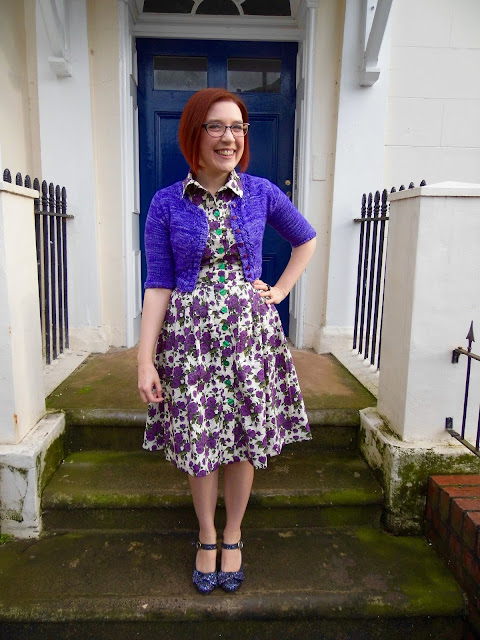 Miette is a free pattern. It's a top-down seamless cardigan with raglan sleeves, and some lace detailing around the yoke, button-bands and waist. It was actually the first knitting pattern I ever followed and now that I am a much more confident and proficient knitter, I wanted to revisit it. I actually knit a blue one last summer that I never blogged, mainly because after I finished it I realised that I had fundamentally misunderstood one of the instructions and the raglan shaping was jacked up as a result. I'm always learning! When I understood what I had done (raglan drift, yo, the struggle is real) I knew how to fix it, so I wanted to knit another one. 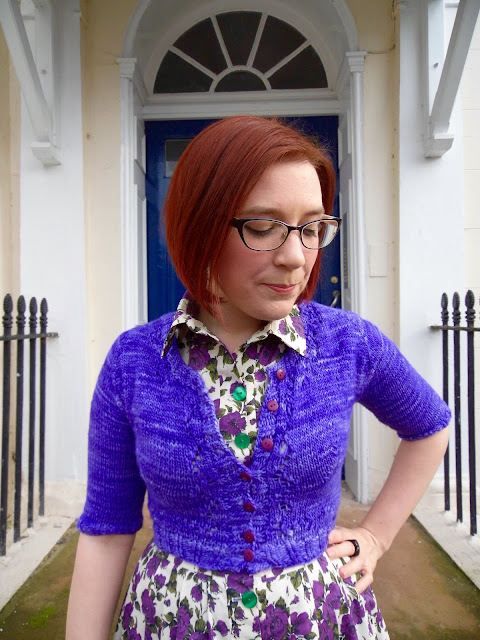 Sadly you can't really see the cute lace detail around the button band, but it is there! I cast this cardigan on on New Year's Eve while Nic and I were drinking champagne and watching Shall We Dance, and I finished it on Tuesday - thanks to the holiday, I was able to knit this in five days. It's cropped, and it's mainly stocking stitch though, so it's not like I have some kind of X-Men knitting skills. 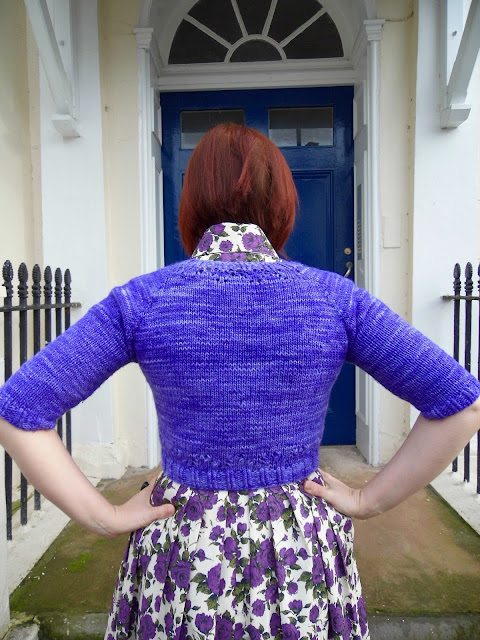 Here's how it looks from the back! I followed the instruction for the 34 inch bust and I really like how it fits. I like it so much that I almost immediately cast on a yellow one, so watch this space for that!

So that's what I've been up to! Having successfully completed both DIY and tidying and, having bought a new bottle of gin this weekend (Daffy's, if you're interested), I'm going to treat myself to a cocktail in the bath and a read of a New York guide book. Have a good week, everyone!
Posted by Roisin Muldoon