How dare you bring shame on this... CELEBRATION OF SHEEP?!

Hey everyone! Happy Easter! I hope everyone has been having a relaxing weekend. After a very busy few weeks at work I was really REALLY hanging out for the long weekend, especially as it was going to be slightly longer for me because I had booked Tuesday off as well.

I know I'm constantly saying how busy work is, which might be getting old, but it's because it really and truly is right now. Luckily, the lady who is replacing me while I do my new job started last Monday, so before long I can start handing some of my workload over. There's a lot for her to learn and last week we had a couple of big deadlines, so I was juggling inducting and training her (and sorting out all of the HR things that come with being a line manager like getting her a buildings pass and sorting her out with payroll) with getting the urgent work done. Luckily for me, she's pretty awesome and she was able to get going on some key things pretty much straightaway. By Thursday, though, I was exhausted. I had a massive spreadsheet to check, my end-of-year review self-assessment thing to write up and about seven other things on my to-do list. When I finally busted out of work at 4:30 I was really ready for a break: 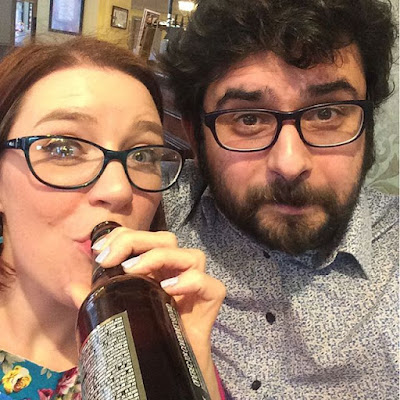 So, it's been a really lovely and relaxing weekend. I have been sewing, sleeping, watching silly films and generally just being pretty lazy. I made two dresses, which you can see on my instagram, and I have plans afoot to maybe cut another one out tomorrow if I have time. None of this is helping with the blogging backlog I have, but there we are. At least there has been a little bit of sunshine so blog photos are a possibility - storm Katie hasn't (yet) hit Leamington, so even if my hair is being blown sideways by the wind, at least I'm not being hit in the face with flying recycling bins or whatever.

Here's a dress that I made last week. It was the result of a sanity-saving impulse purchase on the weekend when my dad was visiting. We were in Coventry to see an exhibition of wildlife photography at the Herbert art gallery and museum and had stopped into Hobbycraft so that Daddy could buy some upholstery pins for his grand kitchen shelving plan (don't ask). Anyway, I bought some fabric to make a gift for a friend, and I bought myself a metre and a half of some turquoise floral cotton poplin. Here's what I made with it: 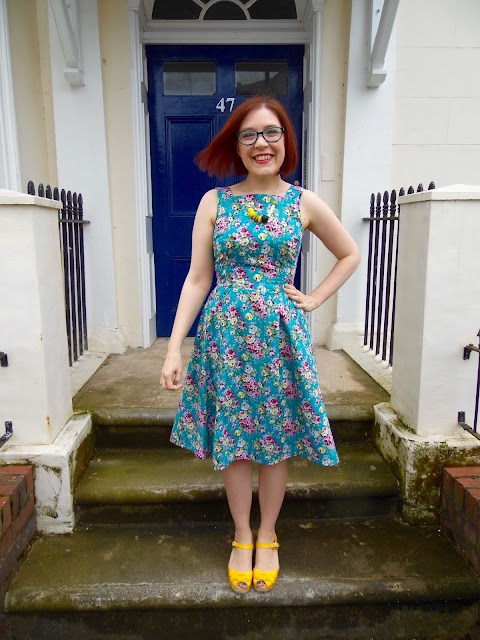 I love this print. So much so that I have made two other dresses with its different colourways - the Elaine dress in pink and the Crush With Eyeliner dress in red. I had eyed this up in Hobbycraft a few different times, but only ended up buying it when I needed some retail therapy! It was £5 per metre and, I have to be honest, the quality isn't amazing! I mean, it's fine and everything - it's just a little stiff and with very little drape. It's grand, though. I can forgive it with this pretty print.

I haven't made a Flora dress in a little while but it was all I could think of when it came to this fabric. This is one million percent because my lovely friend Lauren made a Flora dress from this fabric and I am a massive single white female. I know that making a copycat dress is enough to get you scorned and cast out with sticks and exiled from all polite society, but Lauren and I don't work that way. We have a lot of the same stuff because we have very similar taste in clothes and shoes and suchlike and we have frequently been known to split lengths of fabric. Anyway, Lauren is cool and was cool with it. So, yeah. 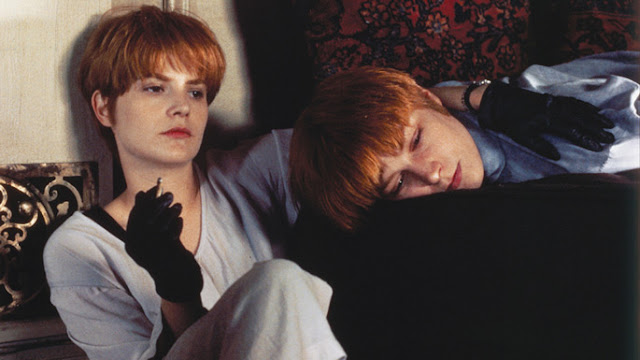 Me and Lauren. I definitely haven't murdered anyone.

So, after I had sat outside Lauren's house until she switched the lights off... I mean, I didn't do that, what are you talking about, I pulled out my copy of the Flora pattern and I cut it out. I had only bought 1.5m of the fabric so didn't have enough for the pleated circle skirt that comes with the pattern. Instead I used a pleated skirt pattern from my stash - probably New Look 6776; I can't remember.

I cut the size 8 Flora bodice. I curved the waist darts to make them a bit more wedge-shaped - a tip that Liz once gave me and an alteration I often have to do on patterns. I think that I could do with shortening the bodice a little bit and possibly dropping the bust darts slightly, as well as taking some excess fabric out of the back neckline. I have lost a bit of weight recently and it always shows across my back and the top of my torso, for some reason! 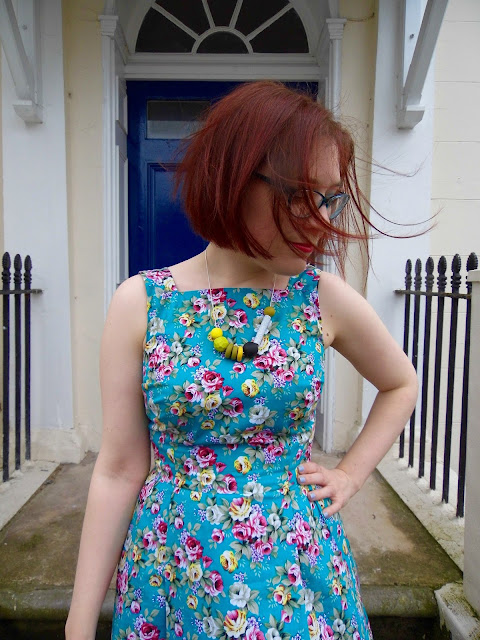 These are - to me, anyway - fairly minor things and I've already worn this dress a few times since I made it. The fabric is so bright and cheery that it's been hard to resist and, of course, the mixture of colours in the print mean that it's easy to accessorise with a variety of things. That's always a draw for me because of my life philosophy of 'one in every colour'. 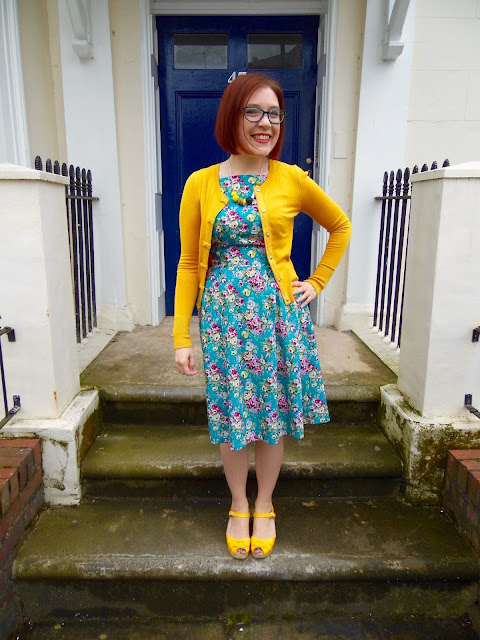 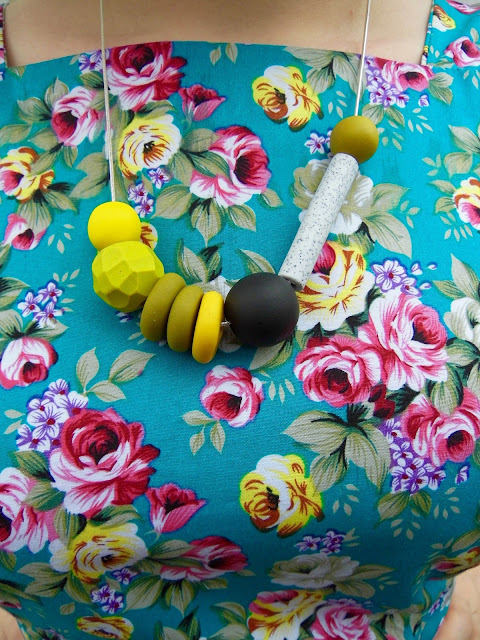 The beads are made from Fimo clay and are so tactile. I'm not usually into jewellery but I've really been attracted to chunky necklaces like this one recently. It has got me thinking that I might like to have a go at making my own at some point...possibly!

So, anyway, that's the Bosch dress. So named because Nic and I were watching S2 of Bosch while I was sewing it. So it's named for Titus Welliver as Harry Bosch not, you know, a washing machine. While that would be fine too, it would be a bit disloyal to my actual washing machine, which was made by Indesit. I live in a rented flat. Bosch is a wee bit high end for me, like. 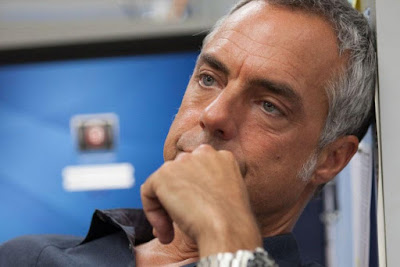 Bosch is all, "Roisin. What the fuck are you talking about."

Now, I have to go and make some pizza dough. We have friends coming over for dinner later. Bank Holiday funtimes! Also, I have some Easter egg that still needs to be eaten...