Follow your dreams. You can reach your goal. I'm living proof. Beefcake.

Hey guys! Happy Friday! I am having a very chilled out Friday night with pizza, gin and episodes of Lois and Clark: The New Adventures of Superman. Yeah, don't laugh at that last one. Or, laugh if you like. I don't care. This show is weird but I still like it.

It's been a less hectic week this week - with the exception of a middle-of-the-night trip to A&E last night. Everyone is fine, thank goodness, but today Nic and I have been mainly resting and feeling grateful for the NHS. As the weather has been so dismal, staying indoors and watching DVDs seemed pretty appealing anyway, so it could have been a lot worse.

Here's a flashback to a few weeks ago and some sunnier weather with a dress I made last month. Actually: two dresses! But I'll get to that in a moment. So, one day about a year ago, I wore my Poppy Heather dress to work: 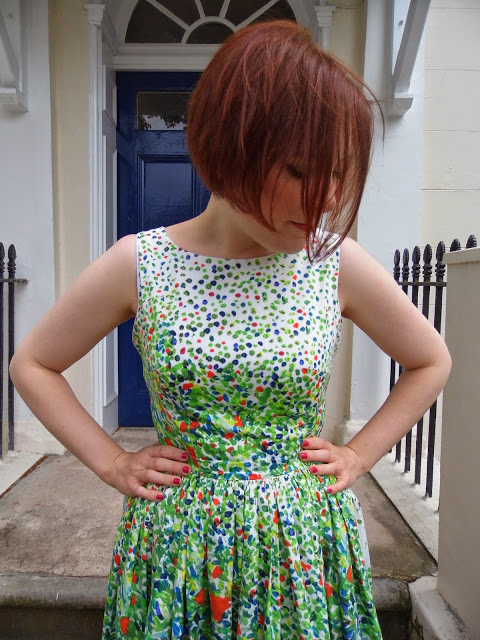 You can read about this dress here if you'd like!

My lovely friend and colleague A commented on how much she liked it, saying that it reminded her of a book - The Very Hungry Caterpillar by Eric Carle - which happened to be her daughter's favourite book. Her daughter M loved the book so much that her first birthday party was Hungry Caterpillar themed. I knew that Very Hungry Caterpillar fabric existed, so I resolved to get some of the fabric and make M a dress from it. I wanted to wait until she was a little bit bigger and, when it came time for A to go off on maternity leave with her second, I thought it would be a nice gift for M. Luckily, my local branch of Hobbycraft had the fabric in stock so I was able to make this: 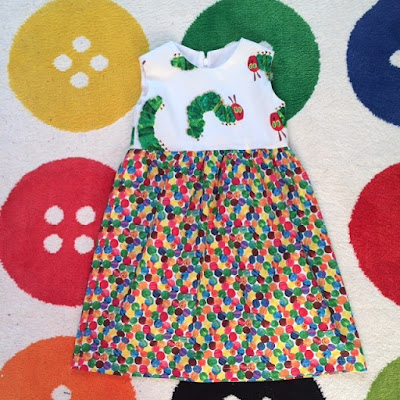 I bought half a metre of the caterpillar fabric and two metres of the dotty fabric - which I knew would be far more than I needed for a little girl's dress, but enough to make myself a dress from it too! The pattern I used for M's dress is the Flo pattern, which was a free multi-sized dress pattern from the December issue of Love Sewing Magazine. I made the age three size - M is two and a half and I wanted to make sure that she had room to grow into it before the summer. It was a very easy pattern to sew, although I think the lack of markings would make it unnecessarily challenging for a total beginner. I didn't use the recommended amount of fabric for the skirt - it seemed like a lot for such a small dress and I was concerned that it would swamp M. Anyway - it sewed up very quickly and easily and both A and M were thrilled with it. I so rarely sew for other people but it felt good to make something that I knew M would love.

And, as I said above, I couldn't resist that awesome print so I made myself a little dress too... 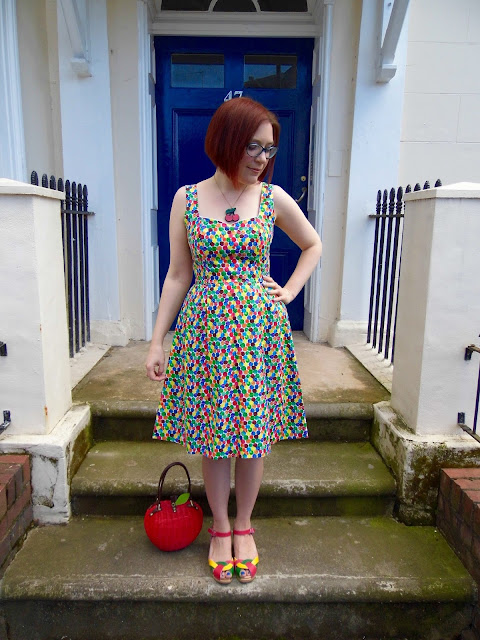 Literally nothing left to say about the Kim bodice now, is there? I still totally love it. Now that I know which alterations to do to it, I can sew it pretty quickly and with no stress. I actually made this dress and M's dress while I was still pretty spaced out with the flu and watching Homes Under The Hammer. Both of those things really tired me out! I took this dress on its first outing on Good Friday, when it was warm and sunny enough to justify it. 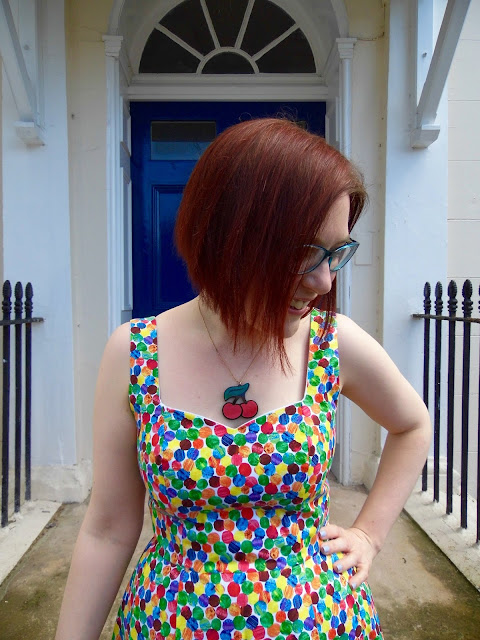 As it was a sunny bank holiday, I decided to run with the theme and accessorised the dress with a bag shaped like an apple and this Tatty Devine cherries necklace. It's what the hungry caterpillar would have wanted. 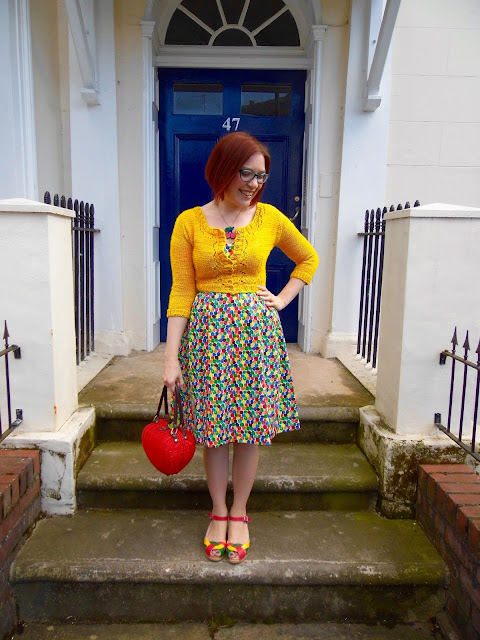 Someone on instagram told me that to be a real hungry caterpillar, I had to wear this dress with a red cardigan. But I'm contrary as fuck. No-one tells Dolly Clackett what to do. So I wore it with my yellow Miette cardigan. Ha ha! But also I will clearly wear it with a red cardigan soon, because that suggestion was legit.

A few people expressed disappointment that my dress didn't have the actual caterpillar on it too. I can see why - it seems like something I would wear - but I like that it's not immediately obvious what the reference is in this fabric. Also, maybe I'm getting serious in my old age, but I'm not sure that I would actually wear a dress with hungry caterpillars on it...

Yeah. I know. I just made a dress with wild west skeletons on it. There's probably no limit to what I would actually wear. I just liked the spotty print more. 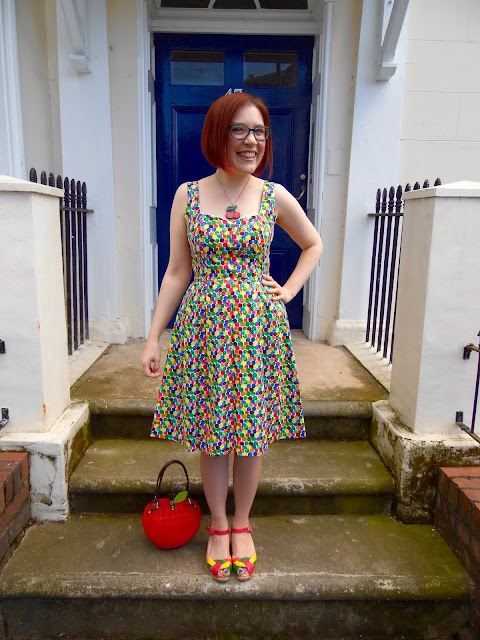 I was in John Lewis there a few weeks ago and, while I wouldn't have bought anything from the ladies' section, there were so many cute little party dresses for babies that I was all, yeah, I would totally wear that. So now that I have a matching dress with a two and a half year old I guess it's official. I have the dress sense of a toddler. We just need to make sure not to turn up to any parties wearing the same dress.

Right anyway, it's Friday night and I have gin to drink. Goodnight!
Posted by Roisin Muldoon