They have trees and Ewoks and barbecues, which is why I like Endor better than America.

WELL HOWDY HO! Well, it's dismal as flip here today in Leamington, but it's hard to be too gloomy. I have pickled onion monster munch, tea, and Monday is over for another week. Can't be bad. I had a busy week last week, as usual, but I took Friday off and had a three-day weekend. I chilled out with Nic, went for a lovely long walk, watched some films, drank some gin and did a little bit of sewing. All pretty standard stuff, but it was good. It's taking me a while to adjust to my new role so being able to take a break is really helpful for my sanity. So is the fact that Nic and I are re-watching the early seasons of South Park. It might be wrong to identify so much with an angry eight-year-old, but I love Cartman. 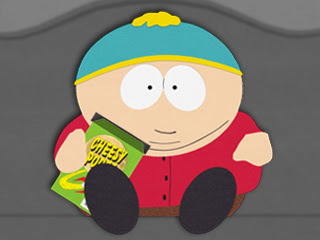 Anyway, that's the craic there. Cartman isn't the only angry TV asshole that I've lost my heart to. In fact, most of my favourite TV characters are angry assholes: Andy Sipowicz, Robert Romano, Dale Gribble, David Lee, Raylan Givens and Al Swearengen. Maybe I'm an angry asshole. Probably. Anyway, today I'm sort of writing on the topic of Al Swearengen because the dress I'm sharing with you tonight is Deadwood-themed. No, seriously. Check this shit out: 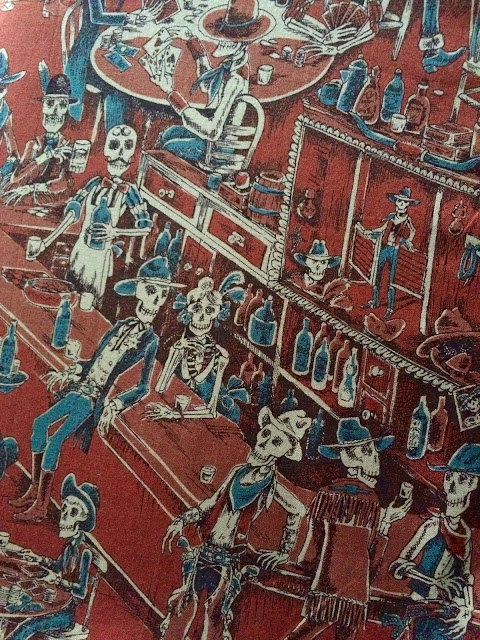 So, this amazing fabric is called Deadwood Saloon and it's by Alexander Henry. A few weeks ago, Alice from Fabric Yard got in touch with me and offered to send me some fabric to be a guest maker for their blog. I've shopped with Fabric Yard before and was more than happy to collaborate with Alice, especially as the business is based in Northern Ireland. When Alice offered me my choice of fabric, I was initially going to go for one of the Frida Kahlo prints as I have had my eye on these for ages. But as soon as I spotted this fabric I was totally smitten. It's Deadwood, but with skeletons!

Alice sent me 2.5 metres and it was pretty obvious that I was going to use the Emery bodice for this dress. I mean, come on. Let's be real. I decided this time to pair it with the panelled skirt from V8998 - the slight bustle effect that the side gathers gives the skirt made it seem appropriate: 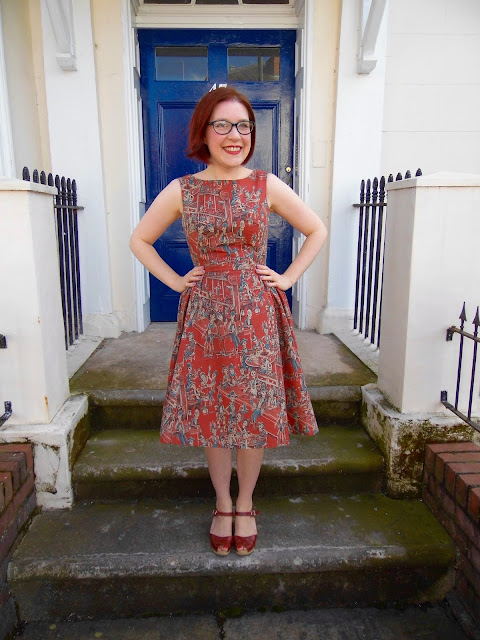 Not too much to say about this combination. I haven't paired these together before, but it works really well. I think the flat front of the skirt is really flattering, but the panelling and the side gathers gives the skirt lovely volume. But, you know, this dress is all about the fabric. Check it out: 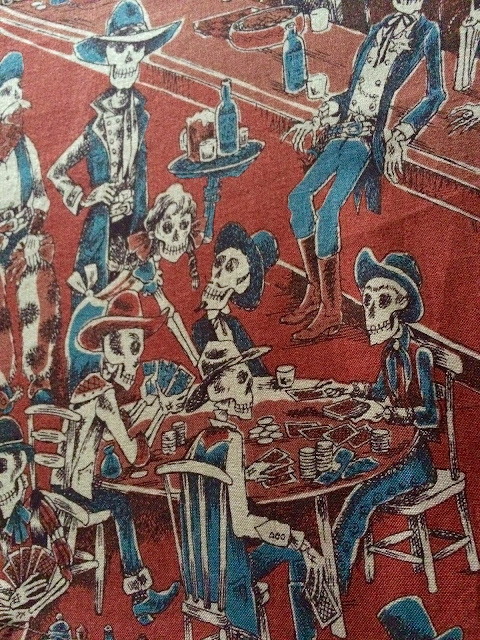 Here's a card game in progress. I reckon the dude with the beard and hat must be Wild Bill Hickok, right? And in the background, that's possibly Seth Bullock. Well, actually - probably not. He's wearing the sheriff's star but that dude is much too laid back to be Bullock:

My friend Amy and I were buying a few bits in a sewing shop in Banbury last weekend and the guy serving us asked us what we were sewing. I told him, "Well I'm making a dress out of a fabric that has a wild west saloon on it, only everyone who is in it is a skeleton." He nodded slowly and then changed the subject. Not everyone gets it, I guess. 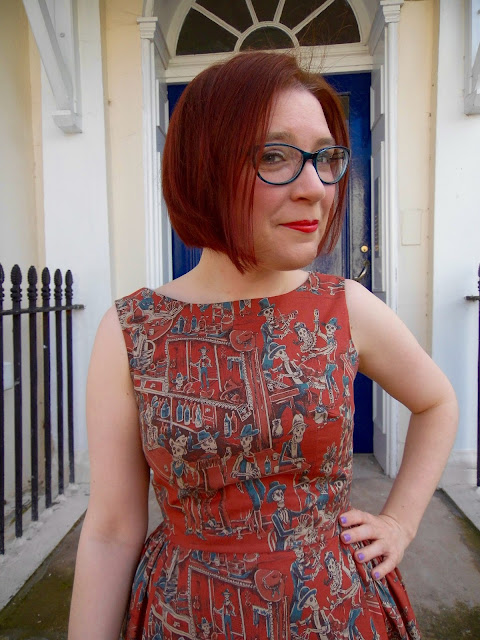 Of course, the skeleton theme of this fabric is not necessarily immediately obvious. I like that. Stealth skeletons. 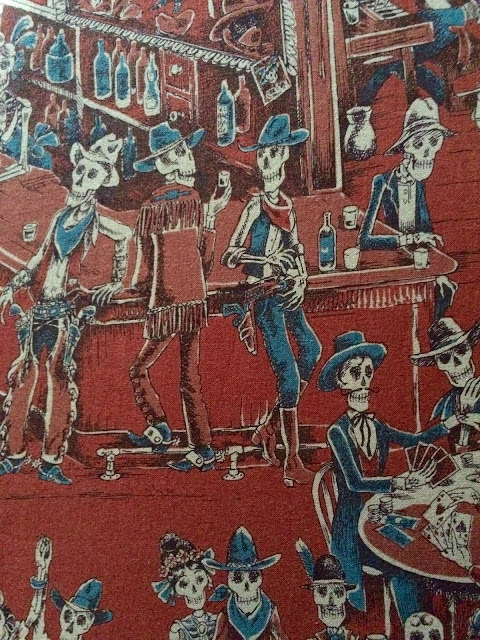 I think the skeleton on the right is possibly Richardson. Yeah, it totally is.

Look, this whole blog post could basically just be Deadwood gifs, because there are so many great characters and great moments in that show. When I was mentally composing this post, I started to think about listing my favourite characters but that would be totally impossible. There are only two characters in Deadwood that aren't awesome - the one played by the Borg Queen and the one played by Sarah Paulson. 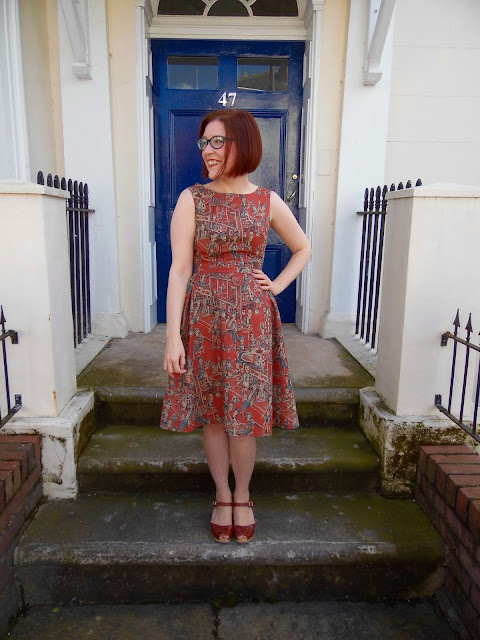 I didn't even know that I needed a Deadwood dress until I found this fabric. So, a big thank you to Fabric Yard for making this happen by sending me this fabric free fucking gratis - tonight I will open a celebratory can of peaches in your honour.

As well as sending me this fabric, Alice has given me a free postage code for you guys. If you use the code MYPALDOLLY  on an order from Fabric Yard you'll get free postage to UK addresses and, during April, you'll get a surprise gift as well. How good is that?!

Right lads. I'm away here. The west isn't going to win itself now, is it?