Me, my ass double and a drill that once appeared on Home Improvement are currently starring in a feature film called Take My Hand

Life hasn't been much less chaotic since the last time I was here. Well, no, that's not strictly true. It's been slightly less chaotic but the chaos has been a little bit more organised. Work has been flying at me from every angle. I got an email on Tuesday that tipped me over the edge into having to go and have a stress-cry (the email was totally fine, too, I was just tired and totally fed up) and then I had two days of very intense meetings in London.

Aaaah. I've been working really long hours and feeling pulled in all directions. I had a big and unexpected piece of work land on my desk a couple of weeks ago on top of all of my business as usual stuff and all of the extra chaos that has been happening recently and it just about put me over the edge! The good news is that I finally cleared it today and - even better - tomorrow is my last working day before a three-week holiday. THANK FUCKING FUCK FOR THAT, LADS. Now seriously.

So, all of the delightful twitching and all that I described in my last blog post is still there and is even worse, in some ways. Ugh. But holiday time is nearly here so I'm holding on.

That's the craic with me. I've been sewing, too, so here's a dress that I made recently.

Last week I wanted to spend Saturday afternoon sewing, so I had a wee hoke around in my pattern stash and found this one that looked likely... 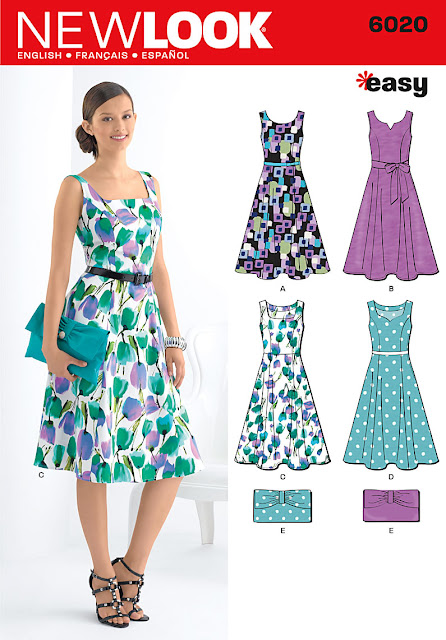 I have absolutely no memory of buying this pattern. None. Seriously. Don't know when or where I got it. Worse than that, when I opened it to cut the pattern I discovered that I already had cut it. It meant that past me had made present me's job easier... but, yeah. I don't know when I did that or what I was thinking when I did. Because, you know, this pattern envelope isn't as heinous as some New Look envelopes (looking at you here, NL6776) but, like, you'd hardly sew this based on that envelope. As with so many other New Look patterns, though, this is actually pretty cute - which you can see from the little polka dotty drawing of view D - so, maybe that explains it. Like I said: no memory.

I had cut it out in a size 10 - past me had - but present me's measurements more closely matched the size 8. So I did have some cutting to do - I trimmed it down and made a bodice toile. I was also experimenting with an adjustment: the pattern is drafted to have a side zip and I hate those, so I needed to add in a centre back seam allowance. Also, the pattern instructions said to sew the bodice with a 3/8 seam allowance so I wanted to check that out. The 3/8 seam allowance was no bueno, but moving the zip to the back worked. I tried the bodice out again with 5/8 seam allowances all over apart from at the side seams, where I needed to use a 1 inch seam allowance and I was good to go.

I had this pretty cute Michael Miller fabric that I had bought from Modes4U when I was having a crappy day: 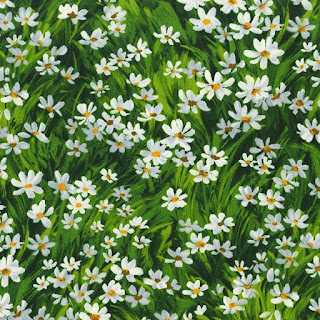 The print is called Meadow Daisy and Bernie Dexter has used it in one of her dresses. I had only bought 2 metres so I didn't have quite enough to sew the panelled skirt of the pattern. I decided to make like the Bernie dress and add a gathered skirt to it. 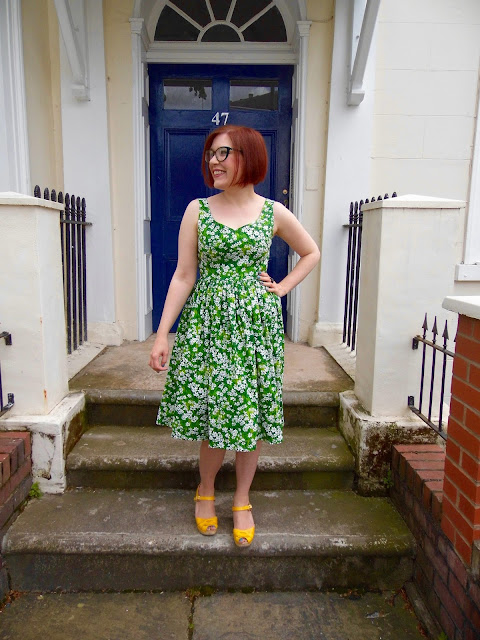 The gathered skirt is closer to the inspiration dress but in this small-scale print, it's definitely not the most flattering. My waist is totally lost in this photo but I promise it is actually there!

As well as changing the skirt and moving the zip to the centre back... and all of the stuff with the seam allowances, I also lined the bodice. The pattern doesn't call for lining, but I would nearly always prefer to line a bodice than to use facings. I lined the bodice, but I used the facing pieces to cut interfacing, which I added to the shell fabric before attaching the lining. I did this because of another modification I made, which was to use the back neckline for views A and B - a v-back: 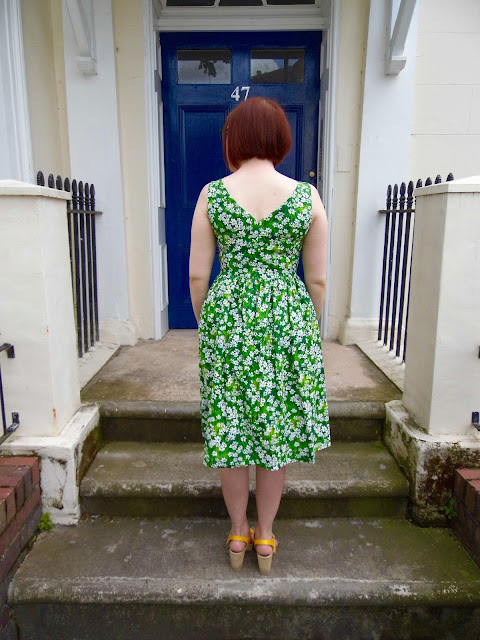 Adding interfacing helps keep the neckline from gaping. It's a trick I learned from NL6776, actually, so nice work, there, New Look patterns. Good job.

One of the things I really like about this pattern is the shape of the sweetheart neckline: 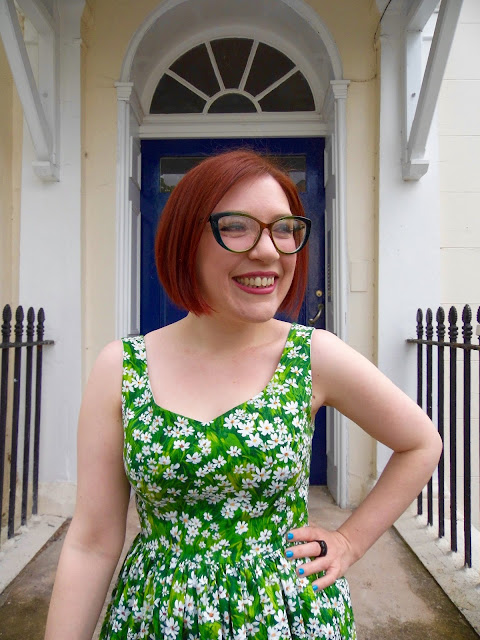 Ugh seriously guys my face is goofy as fuck these days. It's like 300% more goofy than usual. Maybe it's the stress. Or the beer. Anyway - yeah, the neckline. It's similar to the neckline from the By Hand London Kim dress, which y'all know that I love, but it's not as low-cut. It's good.

For having a pretty dorky-looking pattern envelope, this is a really cute pattern. And, like all New Look patterns, it has loads of great options. I definitely want to sew view A and - it won't surprise you to learn - I have already made another sweetheart neckline dress, but with the skirt as drafted. I made it yesterday and am saving it to wear on holiday. Here's a little peep at it though: 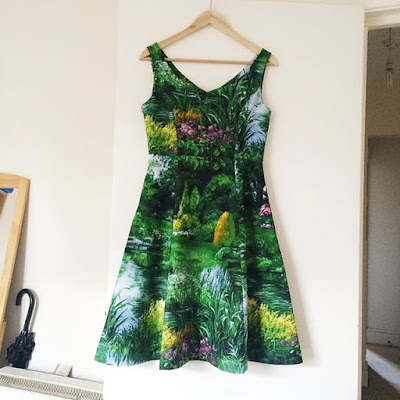 If you're seeing a theme here, you're not wrong.

I wore the Prospect Park dress last Sunday to go out for breakfast with Nic and then to spend some time with my lovely friend Lucy and her kids. I was pretty pleased by the camouflage opportunity it gave me... 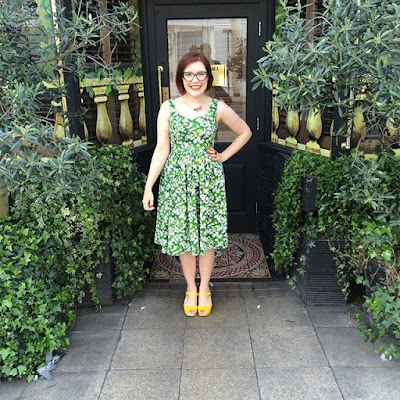 Right now. Not only is it Monday night, but it's our second wedding anniversary today. I had to spend  it at work for reasons which are probably pretty clear, so tonight Nic and I are celebrating by drinking cava and packing. Here's one more picture though, just because I like this dress a lot. 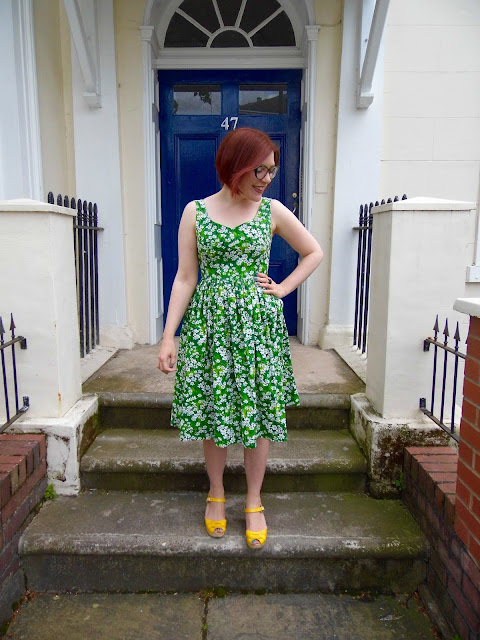 I'll not be around for a while now because holiday. Try not to miss me too much, like. See you on the other side!