I don't sleep on planes. I don't want to get incepted. 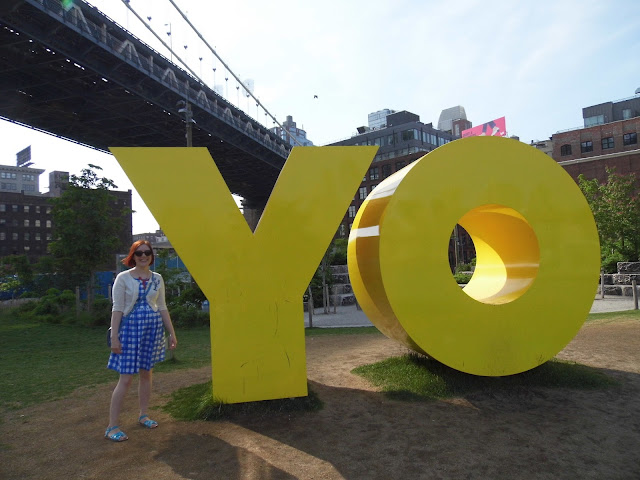 Yeaaah! So, we made it to New York and back. That's me there, at Brooklyn Bridge Park. It's probably pretty unnecessary to say that we had an amazing holiday - especially unnecessary if you follow me on instagram, as you'll have had two and a half weeks of classics like this one: 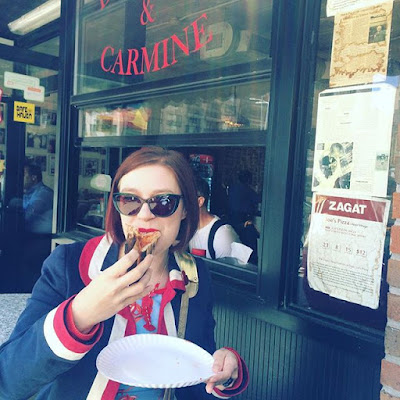 Here I am with a slice of pizza from Joe's of the village. Having sampled slices from a number of establishments, Joe's was my favourite. Nic differed slightly, favouring Sal's pizza in Brooklyn.

I won't bore on for too long about the holiday, but here are the headlines. We stayed in an airbnb apartment in Crown Heights, Brooklyn. The neighbourhood had been recommended to us by a friend who lived there until very recently and it was absolutely brilliant. We were staying on St John's Place, between Franklin and Classon and we both became really attached to the neighbourhood - it is lively and diverse with lots of great bars and restaurants and it's right next to Prospect Park, the Brooklyn Public Library and the Brooklyn Museum. We were close by Franklin Avenue subway station, which allowed us to get into Manhattan on the 2,3,4 and 5 trains and we were also able to catch the B and D trains from nearby Atlantic Avenue to get into Manhattan across the Manhattan bridge. 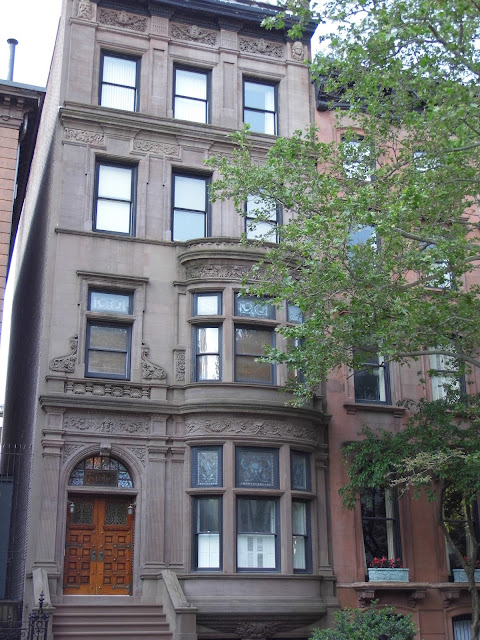 A Brownstone in Brooklyn Heights

Neither of us had been to New York before, but of course everything is so familiar from films and TV shows so it was very easy to find our way around. As film and television people, it was super fun to turn a corner and find ourselves on the set of a film or TV programme that we love... 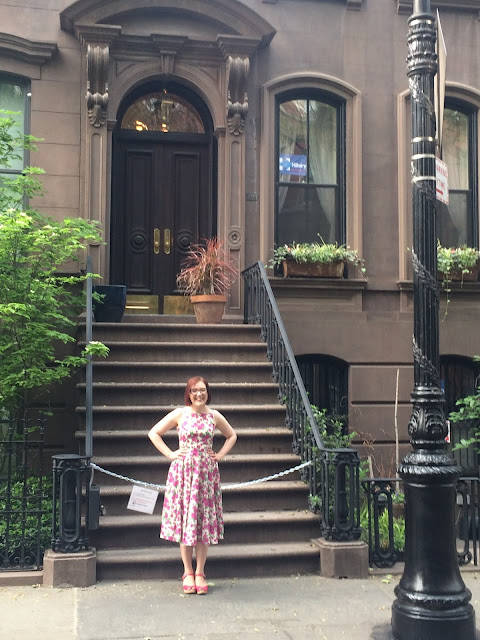 Such as Carrie Bradshaw's apartment... 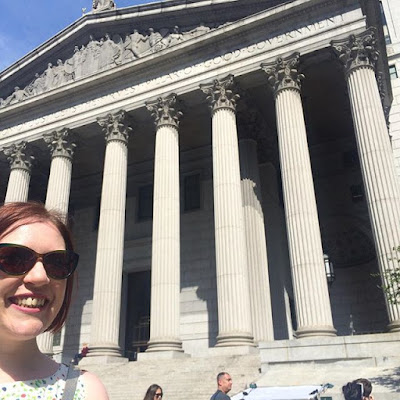 ... and the steps of the Supreme Court. I couldn't stand on the steps itself as filming was taking place on that day.

We did a few of the big tourist things to do - we went to Central Park, the Natural History Museum, the High Line and the September 11th memorial. We decided to only go to one tall building, and that was 30 Rock. It was AMAZING, and well worth paying for. We went up at 7:30pm so were able to see the city just before the sun set, at sunset and after dark. 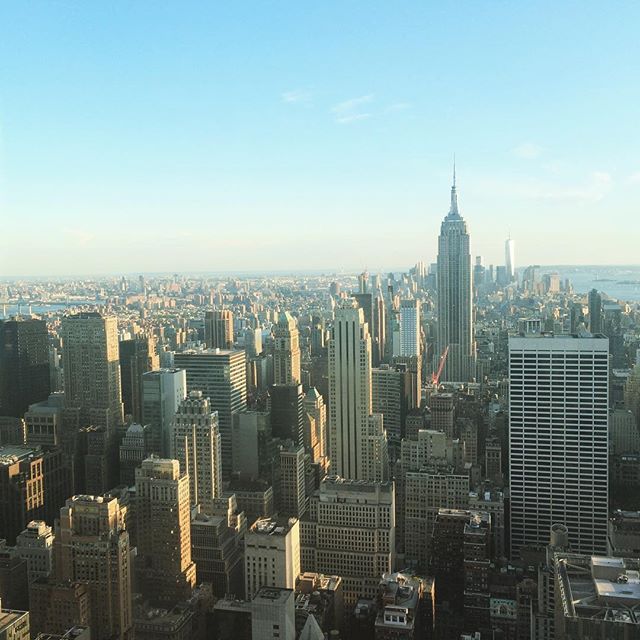 Midtown and lower Manhattan from the top of 30 Rockefeller Plaza. You can see the Empire State Building and One World Trade Centre. 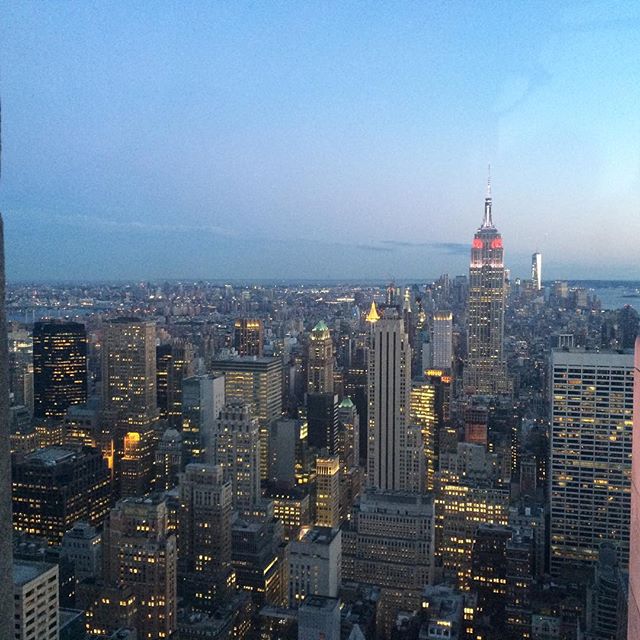 Just after sunset. I took this photo from inside, where we had a window all to ourselves.

We also rode the Staten Island Ferry twice. It's free and it is SO much fun. It was top of my list of things I wanted to do (I guess I've seen Working Girl a few too many times) and it did not disappoint. On our first trip we spent about an hour in Staten Island but on our second go we just got off the ferry in Staten Island and straight back on it again back to Manhattan. 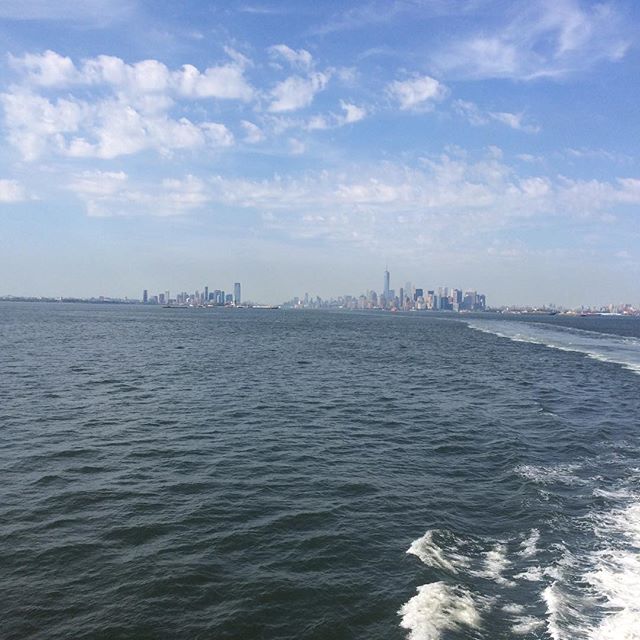 Jersey City, Manhattan and some of Brooklyn seen from the Staten Island Ferry

The ferry runs all night and the next time we go to New York I'd like to take it at night. I bet that view is spectacular.

We were lucky enough to be able to meet up with some friends while we were in New York. A friend of Nic's from university lives in Greenpoint, so we met her one day for dumplings at Vanessa's in Williamsburg. Another good friend from our university days, Rod, lives in Brooklyn also so we were able to catch him in between work and moving house for breakfast at Lincoln Station. We met up with some sewing bloggers too - although at no point did I get my shit together enough to get photos! Jennifer invited us to see her Workroom Social studio, which is in Crown Heights, and we had lunch with her and Suzanne at Berg'n Beer Hall. Jennifer and her husband also took Nic and me to Flushing for dinner in Chinatown. We went to Astoria to hang out, eat Greek food and talk crap with Sonja and our very hungover selves met Marcy for ice-cream sandwiches and fabric shopping in the Garment District. Without Marcy I might not have bought any fabric at all - we didn't do a lot of shopping, really - but I'm very glad that I did. And, as ever, within moments of meeting all of these lovely ladies it was like I had known them forever. And ice-cream sandwiches are good for easing hangovers, just so you know.

Lots of the best things we did were spontaneous and low-key. We spent a fair amount of time exploring Brooklyn - man, we fell for Brooklyn in a big way - and a lot of time drinking craft beer and people-watching at various bars. One of the best and most surprisingly fun things was sitting for a few hours on a bench in East River Park watching the sun set over the Manhattan skyline: 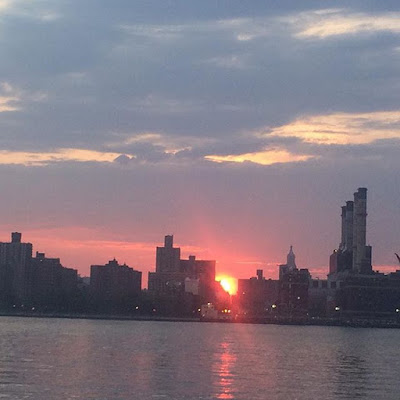 We walked. A LOT. We averaged around eight miles a day. We drank a lot of beer and a fair few cocktails, ate a decent amount of pizza and quite a few doughnuts too. It was the best holiday. I'm back at work tomorrow and, while I'm sure that it won't take long for me to feel tired and stressed again for the moment I'm still feeling the benefit of our time away. 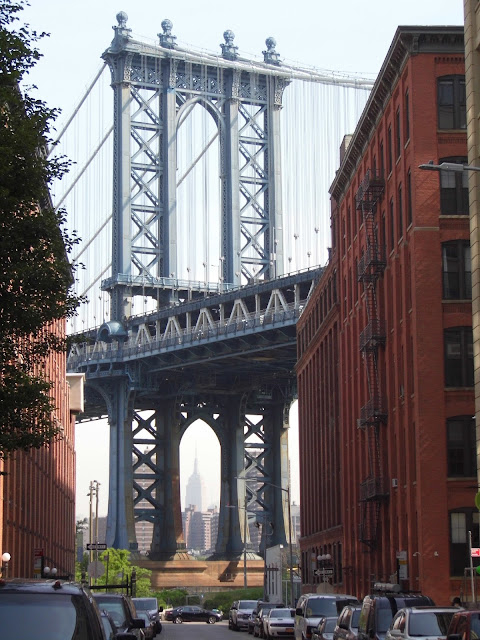 The Manhattan Bridge and Empire State Building. Nic had to get out into the middle of the street to take this photo!

It was good to have a bit of a holiday from sewing and blogging, as well. I didn't miss either and I had been feeling a bit...well, meh, about blogging before my break. It happens from time to time and so much had been going on in my life throughout April and May that it made me sort of lose interest in blogging. I'm still not sure where I am with it, if I'm totally honest, but it is nice to be writing now, so I guess that means I'm not ready to throw in the towel just yet! I'm certainly not tired of sewing and I do have a dress to show you that I made before we went to New York. It would be nice to have good photos of me wearing it there - I did wear it there - but I didn't get organised enough to have Nic take them. Instead I got a few photos in a brief moment of sunshine yesterday afternoon! 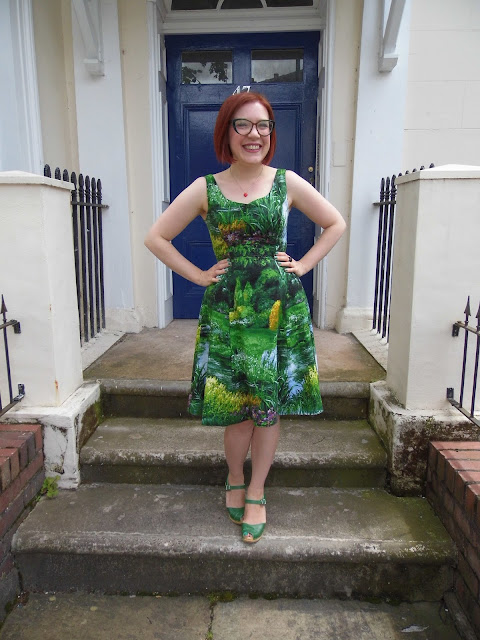 Having liked the bodice of the Prospect Park dress so much, I knew that I wanted to make a version with the skirt as drafted in the pattern. I had three metres of this Michael Miller landscape fabric that I had bought from Miss Ginger so that's what I went for. Still no fan of a side zip, I made the same modifications to the pattern that I did with the Prospect Park dress - rather than cutting the centre back pieces on the fold, I cut two of each and added a seam allowance of 5/8. I used 5/8 for the seam allowances all round (rather than the 3/8 that the pattern calls for) apart from at the side seams, where I had a seam allowance of one inch. 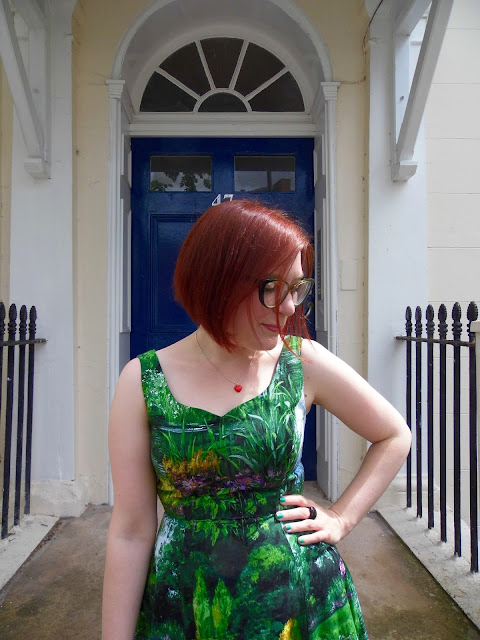 I self-lined the bodice, as before, and I did as good as job as I could of pattern matching across the seams of the skirt. The skirt looks kind of frumpy on the pattern envelope and I wasn't that sure if I would like it. I reasoned that, even if I didn't love it, the print is so amazing that I'd still wear it. But, I really like the shape of the skirt - I think the a-line is full enough to give me the silhouette that I like but a-line enough not to be a total fabric hog. Yet again, a New Look pattern comes up trumps. I definitely want to try the other bodice variations on this pattern with this skirt. 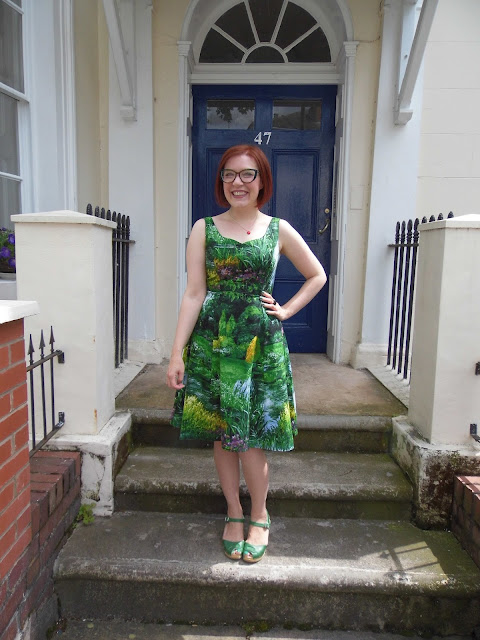 Needless to say, I really love this fabric. There's just something so cheerful about a landscape print. I wore this dress twice when we were on holiday and felt great in it both times - although I must admit that I like it better on me now. I swell up a bit in the heat and I am very pale, so my very Irish skin looked extra Irish (blue) against the vibrant colours! 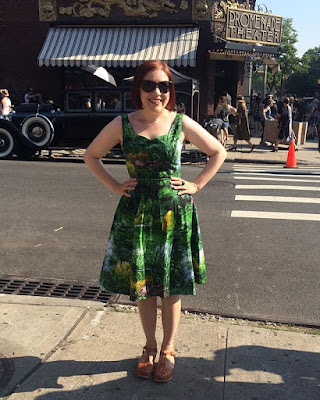 Here I am wearing it on location in New York. No, seriously - there was a film being shot in our neighbourhood. It's Todd Haynes's new film, Wonderstruck, which stars Julianne Moore. We didn't see Julianne herself, unfortunately, but it was still pretty cool!

As there is very little danger of me swelling up in the heat of the English summer, I think it's safe to say that I'll wear this dress a fair bit! Good old New Look patterns.

Right, now I have waffled on for ages here and I want to have a drink and watch some crappy TV before real life starts again tomorrow. Until next time, folks! 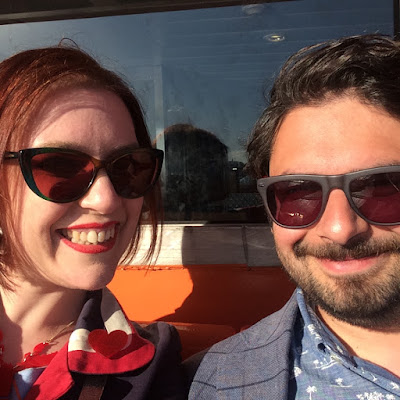