If Shakespeare had written Taken, it’d be four hours long and be mainly Liam Neeson fretting and pacing and talking to bones. That’s the basic difference between Hamlet and Taken: Liam Neeson makes up his mind.

Evening! I hope this finds everyone well. I'm suffering from the combined effects of hay fever and a head cold, feeling deeply anxious about the outcome of today's EU Referendum and still only halfway through my work week because I have to work all weekend. OH, and I have to spend tomorrow in Slough.

Despite all of this though, I'm grand and we have a big dumb movie on in the background to cheer the whole thing up. It's San Andreas - think of it as us readying ourselves for disaster. But also it's because I find stressed-out Paul Giamatti inherently hilarious, so there's that too.

I've been merrily sewing away, which has been fun. I had a stressful and busy few months in which I didn't have a lot of time for sewing but I did buy a fair bit of fabric so my stash is as full as it has ever been. I keep it in an Ikea 'Hol' side table that doubles as our coffee table and it's almost full. It's a small stash in comparison to many, but it's what I'm comfortable with, so I am on a mission to sew my way through a good portion of it over the summer.

A good place to start was making something from one of the pieces of fabric I bought in New York - some checked poplin with a slight stretch to it that I bought from Chic Fabric in the Garment District.  It was $4 per yard and I bought two yards without any especial plan for it, and before I went back to work I realised that it needed to be made into a Simplicity 2444, so that's what I did: 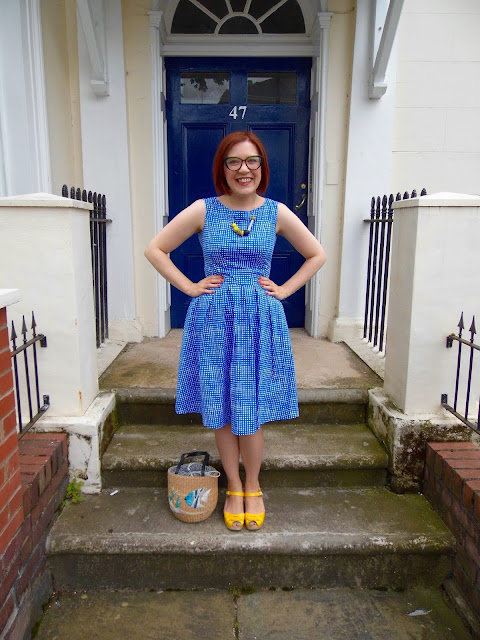 I didn't totally love the fabric on the bolt because it felt a little bit...crunchy? The shop owner assured me that it would wash nicely and I figured that at $4 a yard I was willing to take a risk. He was right, though - it washed really nicely and all of the crunchiness disappeared. I didn't realise when I bought it that it has a slight stretch to it - a bit like the stretch sateen that I have sewed with in the past - but that worked out really well. I'm carrying a little bit of holiday chub (all of that pizza and beer... it was mostly cancelled out by all of the walking, but not totally. A few weeks of eating vegetables and not drinking beer every day will sort me out) so a little bit of stretch is very comfortable right now! 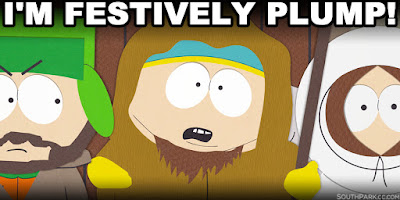 It's been a while since I've made a 2444 (maybe a year) but it was a nice, fun pattern to sew after a few weeks away from my machine. I sewed a straight size 8, with the main adjustments being the standard ones I have made in the past for this pattern, which is to sew the shoulder seams at 6/8, omit the pockets and to cut the skirt front on the fold rather than have a seam down the front of it. I also pinched out two darts in the back neckline, because it was gaping really badly - much more so than on any previous iteration of this dress. This is possibly down to the fact that the fabric has some stretch to it. 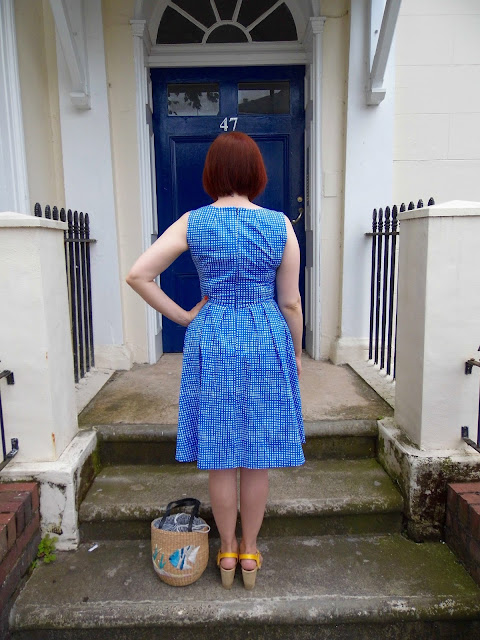 Back view. DORP. When Nic took this he told me, "It doesn't look that wrinkled in real life!" which was reassuring. I think it looks okay though. The fitting police might put me under arrest, but no jury would convict.

I think that, right being right, I could do with shortening the bodice on this pattern. I am pretty short-waisted. I've considered it in the past for old 2444 but it looks like it might be a bit of a ball-ache because all of the bodice darts are at the waist. Eh - that's just pure laziness though, isn't it? It is, though. I can admit it. 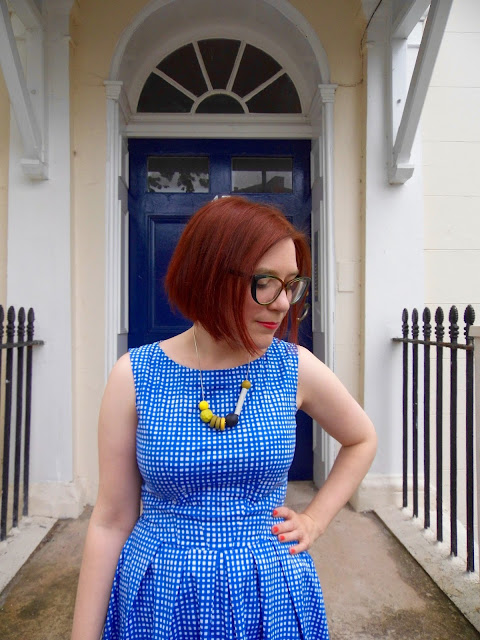 Yeah this bodice needs to be shortened a bit. ROISIN GET YOUR SHIT TOGETHER. But also, here is a closer-up view of the fabric and my Monstrous Pencil necklace, which I bought at Berylune and which I super love. I have bought, like, five of these necklaces. It's ridiculous.

This is one of those dresses that isn't really exciting, but I am very happy with it. It's comfortable and cute and classic. It's the sort of dress that I would buy in a shop so I am sure I'll wear it loads. I've already worn it twice in the last week - once, on the day after I made it, when it was rainy... 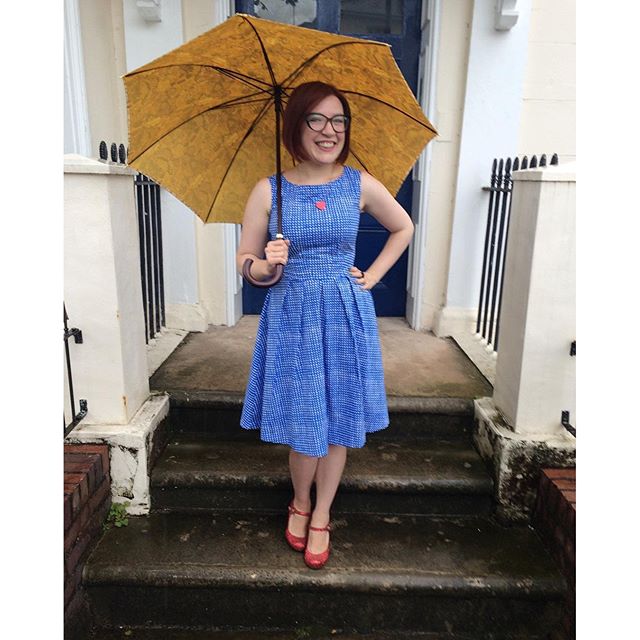 This photo is a little out of focus but don't blame the photographer, it was raining pretty heavily!

...and I wore it today to work from home, vote, defrost the freezer and to have dinner in the park with Nic: 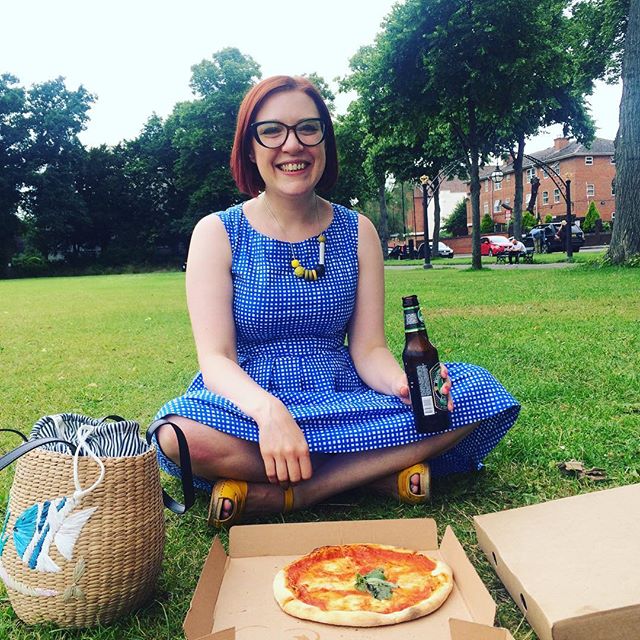 Right, okay, I know that pizza isn't a vegetable. It was good though.

So that's the craic there anyway. Simplicity 2444: still a winner. Such a classic. Now I'm away here. I need to give San Andreas my full attention. It has Archie Panjabi in it AND Paul Giamatti is getting pretty stressed. What's not to love? 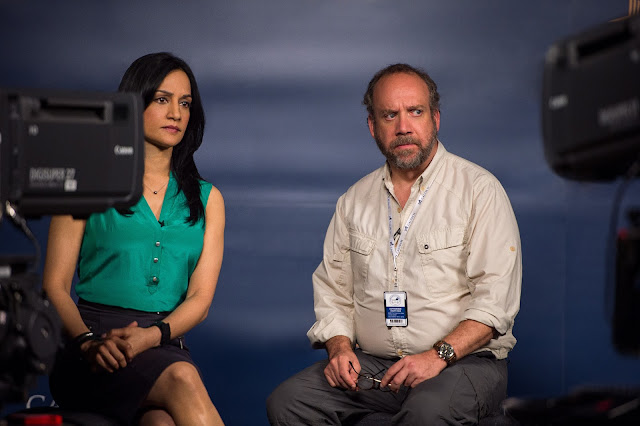 Like, I would definitely watch a TV show of just these two guys.