So, okay. Normally I wouldn't talk politics on the blog but I feel like I can't write a post without mentioning the outcome of last week's EU Referendum. It's been on my mind constantly since then. Like many people - 48% of those of us who turned out to vote - I am devastated by the result. I was angry, upset and scared by the racist rhetoric that surrounded the Leave campaign and I am frightened about what the outcome of the vote might mean for the UK. More immediately than that - for me, at least - I am bitterly angry about what withdrawal from the EU could mean for my home country of Northern Ireland. Northern Ireland voted to remain and will be on the border - on the frontier, as David Cameron referred to it - of the EU, should the UK withdraw. And, as an Irish-identifying Northern Irish person who grew up right on the border, I am frightened about what a return to a hard border might mean for the country. I'm terrified that it could signal a return to conflict - EU law and the ability to move freely between Northern Ireland an Eire underpin the Good Friday Agreement, so that's under threat, and Sinn Féin have already issued a call for border poll: a referendum on Northern Ireland's future in the UK. You can read in more detail about the possible ramifications of withdrawal from the European Union here.

On a personal level, I am furious with the result. I'm furious that such a referendum could even take place and that seemingly nobody in Westminster thought about how the outcome could affect the people of Northern Ireland. I know that it's a small country and it's an issue that most English voters would not have considered, but English people also suffered the consequences of the troubles. Ask the people of Warrington, Manchester, Reading, Guildford, Birmingham, Lichfield, Shrewsbury, Brighton or London what the peace in Northern Ireland means to them.

I grew up in Aughnacloy, County Tyrone, which is on the border between Northern Ireland and Eire. For all of my childhood, this was a heavily militarised border. One of my earliest memories is of Aidan McAnespie's murder by a British soldier at the border checkpoint. I was six when this happened. Aidan was the brother of classmates, a friend of my uncle's, a distant cousin. It's very hard to describe to anyone who hasn't experienced this what it was like - but, if you want to get an idea of the lasting trauma this has had on the people of Northern Ireland, read about the high suicide rates of Northern Irish people of my generation and the generations subsequent to us; the Ceasefire Babies. I am frightened and frankly fucking furious that Westminster and the people who voted Leave have put Northern Ireland at risk of conflict again. And that it was done without even a thought is the thing that makes me the most angry. The rational, intellectual part of me wants to feel ready to move on, to try to understand the people who voted Leave because they thought it would help the NHS or because they're desperate to be able to buy bendy fucking bananas, but I'm not there yet.

So, yeah. It's been a totally shitty few days and we have some seriously scary times ahead. But it's time to talk about sewing and dresses again. I need the light relief right now.

I was in London all weekend for work and took yesterday and today as time off in lieu. I haven't accomplished much - a little bit of sewing, a little bit of tidying, and that's about it. Nic and I went out for a walk in the sunshine yesterday and had business lunch at Kayal. As the sun was shining - albeit for only a few hours - I thought I would wear and photograph a dress that I made recently!

This dress was inspired in part by a beautiful dress that I saw while we were in New York. Catching the subway one day, I saw a woman buying her ticket and wearing a wax cotton maxi dress. It had a sleeved bodice with a scoop back, an exposed zip and a full, pleated skirt. She was wearing a matching headscarf and she looked so stunning that I had to run up to her and tell her that. I have a wax cotton maxi dress - my Barbès-Rochechouart Anna dress - and I wear it loads, but I wanted something with a similar shape to the beautiful one I had seen. I did a bit of investigating and it seemed that Simplicity 1610 might fit the bill: 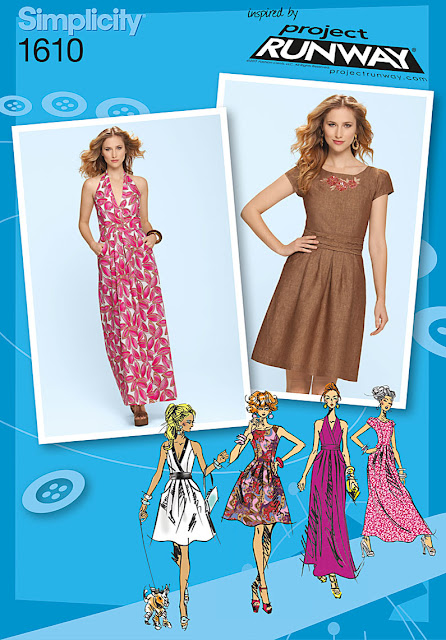 I obviously had some wax cotton in my stash: this purple and green print that I bought last year in Paris (from Tissus Toto, where else?!) 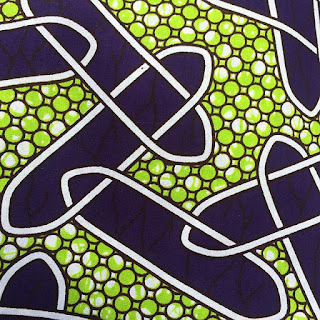 Although my inspiration dress had sleeves, I thought that sleeves might be a bit too much on this wild print. Yes, I worried about what might be too much when I was sewing with lime green and purple cotton. Make of that what you will! But I am very happy with the finished dress: 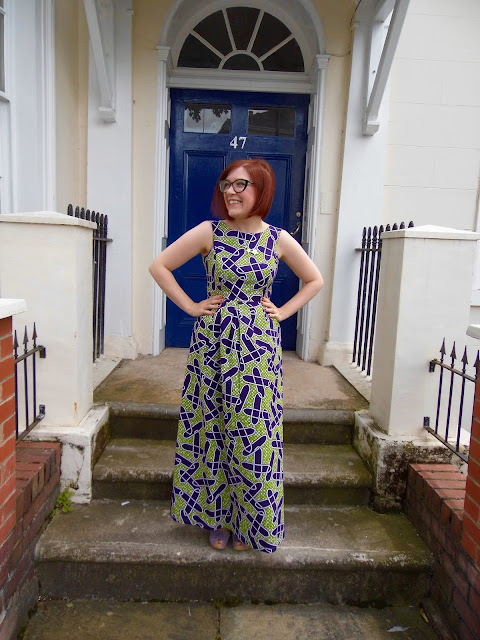 Franklin Avenue dress - Simplicity 1610 in wax cotton. Not much point in telling you what shoes I'm wearing as you can't see them!

Admittedly, the lines of this dress are lost in this crazy print, but the skirt is very cute. It even has pockets! You can see them in the line drawings for the pattern: 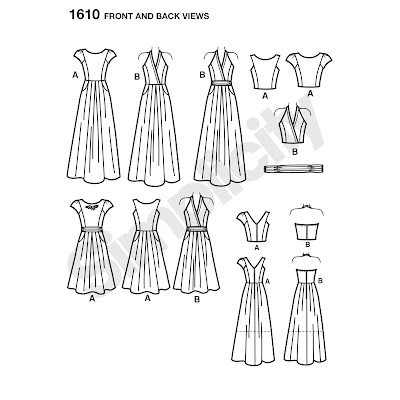 I sewed a size 8 and the only adjustment I made was to shorten the bodice by an inch, which is an adjustment that I nearly always make these days. The pattern calls for the bodice to be lined, and I self-lined it. The length of the skirt surprised me - I'm very short and it was the perfect length for me! So, I would say that if you're taller than 5'1" you might want to consider lengthening the skirt. 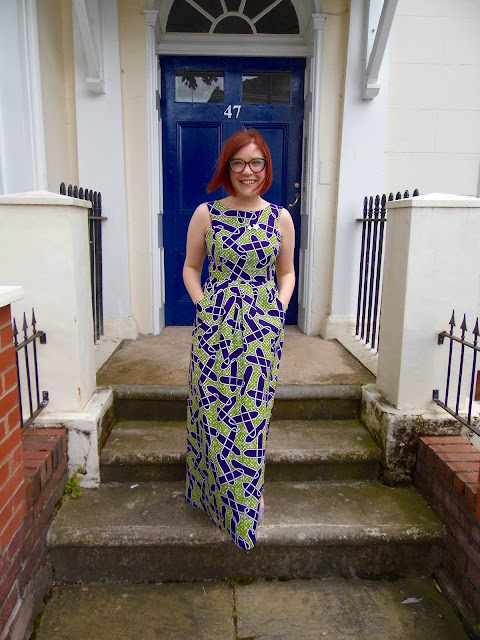 I only glanced at the instructions for assembling the bodice - they're obviously pretty standard - but I did read more closely the instructions for assembling the skirt to make sure that I had the construction steps for the steps correct. It was very neat and straightforward and easy - the only slight issue that I had was wrestling the long skirt pieces to make the pleats! It wasn't difficult or anything - it's just slightly more awkward to manage when you have a lot of fabric. 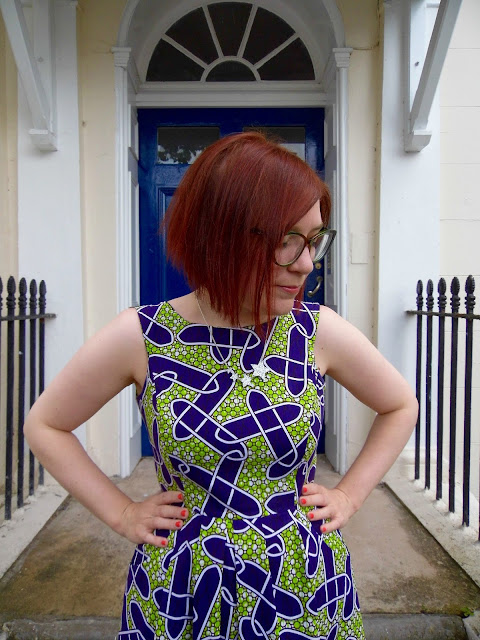 Again, it's kind of hard to tell in this fabric but I really like the shape of the bodice and especially the armholes - they're angular rather than rounded and it's a lovely detail. For some reason, I think that the bodice makes me look super busty...not something to complain about, like, but still notable, I think! The other thing that I like about the bodice is the v-shaped back neckline: 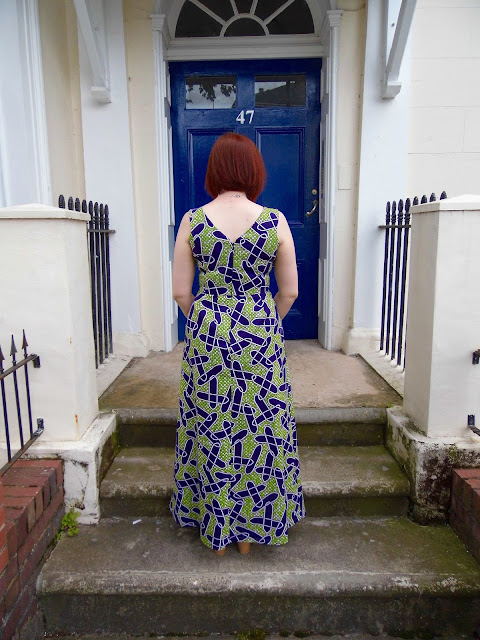 Yes, so all in all, I think this pattern is a winner. I liked this so much that I straightaway made a knee-length one in another piece of wax cotton that had been hanging out in my stash. I think I like it even more than this one - and, being knee-length, it's probably more everyday wearable. A wax cotton maxi dress isn't an everyday dress, for sure, but judging by how much I've worn my wax cotton maxi Anna dress, this one will do me very nicely. 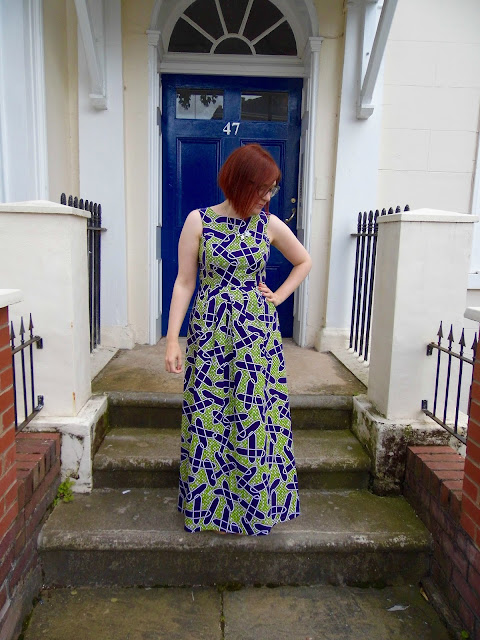 Nic loves this dress. For some reason, he's always delighted when I wear a maxi dress and I am delighted by his delight. In these dark and troubling days, a little bit of colour and delight can only help.

Right now. I have to be up early in the morning for a meeting in London so I shall say goodnight. Until next time, friends.
Posted by Roisin Muldoon