It was a topless woman on a tractor. Do you know what they call that in Europe? A cereal commercial!

Hey hey boys and girls. Happy Monday! I've been a meeting all day today...I have another all-day meeting tomorrow and generally a pretty meeting heavy-week looms. They're mainly all rooms with windows, so it could be worse, but it's been a while since it's been this meeting-intensive. I'm out of practice! I still have a few quieter weeks of summer (and then a holiday) before work becomes seriously busy again, so I shouldn't complain. But, then, when has that stopped me?!

Things have been generally pretty great, though - we've had a really fun few weeks. We had a visit to Bristol a few weekends ago to see our friends Katherine and Justin. Last weekend I took a long weekend so that we could go back to Northern Ireland to go to my cousin Sean's wedding. While we were there we were able to spend lots of time with our seven Northern Irish nephews and be there for the newest one's baptism. Matthew was born on 1st June and my sister Colleen asked me to be his godmother, which was wonderful. He was baptised on the Sunday. 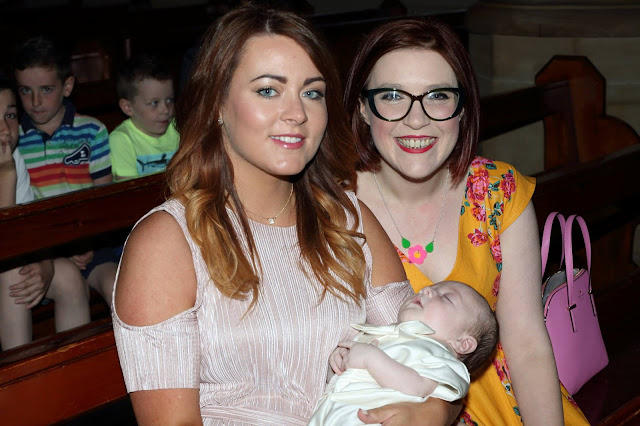 Here I am with my sister Colleen and baby Matthew, and you can see three of my nephews in the background too! My dad took this photo with his super camera - I'm looking forward to seeing all the other photos he took that weekend.

This past weekend was lovely, too - we had dinner with a friend on Friday night and spent the day in Birmingham on Saturday. We had a mini gin festival in our flat on Saturday night with friends - I have a lot of gin and it was a fun way to share it with friends. 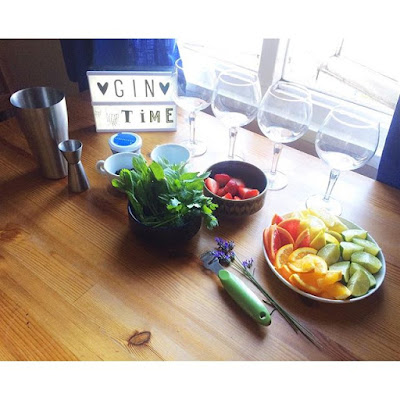 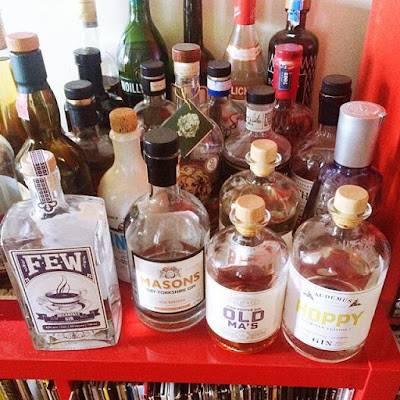 Some of my gin

So anyway - life has been busy, but in a nice way. I have a free weekend this weekend and am planning to spend at least some of it sewing. As ever, I have a little bit of a backlog of projects to show you. Today it's one that I made from some fabric that I bought when we were in New York in May. Fabric with tractors on it.

Nic and I had a few hours with Oonaballoona on one of our days in New York. We were feeling a bit delicate so decided to focus the shopping on a few stores. I told Marcy that I wanted to visit Chic Fabrics, as I loved seeing her instagram posts from the store and she was delighted with this suggestion, as she said that there was fabric there she knew was made for me. She had seen the fabric on Peter's instagram and she wasn't wrong. I loved it. 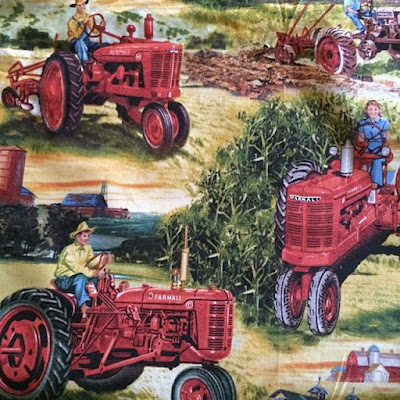 Riiiiiiiight?! I've been slowing down my novelty quilting cotton sewing but, you know, this was $1.99 a yard and I am only human. I had to buy it. Of course, I could have used it to make something other than a dress but come on. This is me.

I bought two yards, which I knew would be more than enough to make a dress from. I didn't have a specific fabric in mind but after I had booked my flights home to Northern Ireland, I knew that I wanted to have the dress made to wear home. Having recently enjoyed sewing Simplicity 1610, I decided to go for that bodice. I wanted a pleated skirt but something a little bit different, so I 'drafted' one. I say drafted - making a pattern for a box-pleated a-line skirt is not what you would call challenging, but that's what I did anyway. 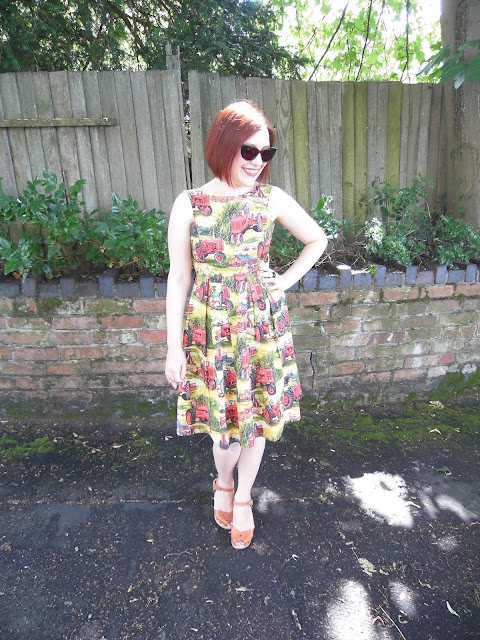 Having sewed this bodice a few times and worn its various iterations a fair bit, I think I may have shortened it a tiny bit too much. I'm not sure this dress hits me at the most flattering part of my waist. But I'm wearing a dress with tractors all over it, for fuck's sake. It's never going to be super flattering or elegant! 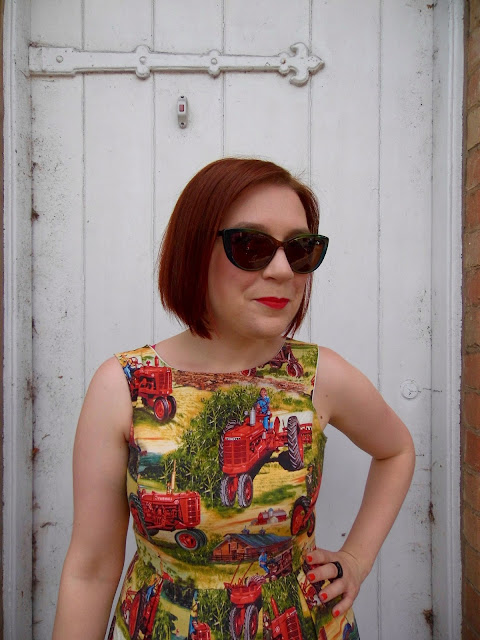 Yes, that IS in fact a sassy lady tractor driver there. I like her boiler suit. I used to have a similar boiler suit when I was a little girl. Mine was navy with red piping and I wore it when I was helping my dad out fixing washing machines and putting up TV aerials and stuff but it did come from a farm supply store in Aughnacloy. Ah, memories.

I was actually really happy to make this dress to wear home. My grandparents were farmers so I spent a fair bit of my childhood around farms. My brother-in-law has a farm too, so there is still farming in the family! This fabric is pretty kitschy, definitely, but I enjoy the connection to my people. Also, any excuse to run around singing Hit The Diff is all right by me. 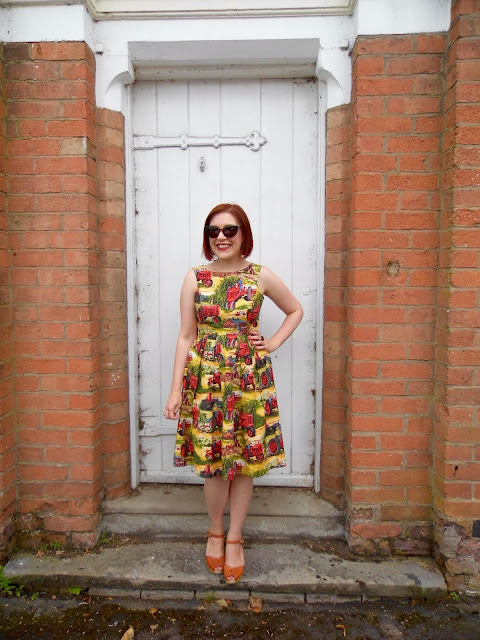 In fact, I very nearly named this dress the Hit The Diff dress. You know that I like to name my handmade dresses and there's usually some meaning behind it. However, when I posted a picture of the finished dress on instagram, my friend Claire named it for me - The Day The Tractor Cowped. This is a very old joke between the two of us. While doing our GCSE in Media Studies, Claire and I had to storyboard the trailer for a film...which we decided to base on a story we had read in the yearbook put out by the boys' school that was attached to our school. It was a thrilling tale of the day when a tractor cowped - which, for the non-culchies out there, means 'fell over'. Our film was going to be called Tractor! and its action hero was going to be my dad. You guys, it was immense. That film is mine and Claire's great lost masterpiece. I'm glad to have commemorated it by making this beautiful dress.

Somewhat shamelessly, I also wanted to make this dress to entertain my nephew Joe. When he was smaller, he was all into tractors. Sadly, I slightly missed the boat on this one - he's now totally obsessed with dinosaurs so the dress didn't merit much of his notice: 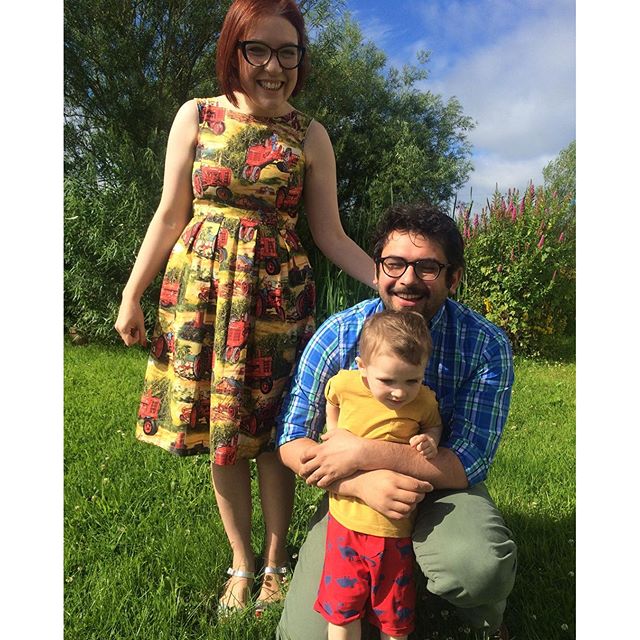 Joe D, not one bit interested, there. I'm going to have to make myself a dress with dinosaurs on it for the next time I see him. That should hopefully send me straight to the top of the aunt charts.

So anyway, that's the craic there. I'd better go as I have some stuff to do. You know, towin', liftin', sowin', balin', drawing, hauling and buck raking... that sort of thing. Don't forget to check out what Peter made with his tractor fabric though. It was a much classier affair than my dress, and very handsome he looks in it too! Right now lads. Goodnight!
Posted by Roisin Muldoon