Brr. It sure is cold in here. I wish some strong, chivalrous man would lend me his jacket...or pants.

Hellooooo! What's happening, folks? Not too much craic here, it has to be said - which I'm not complaining about! I'm trying to embrace the clocks going back rather than bemoaning the end of the summer - this mainly involves buying cute boots and candles in shocking amounts and making plans for winter fun. Also, now that it's November, I am busy trying to decide how many chocolate panettone I can reasonably buy from Carluccio's. I bought one massive one last Christmas and it was just THE BEST, and now I am seriously tempted to fill all - ALL - available cupboard space in my kitchen with them. Whatever gets you through, though, right?

So that's the craic. It was Hallowe'en yesterday and I did dress appropriately in a dress that I made from some awesome Alexander Henry fabric: 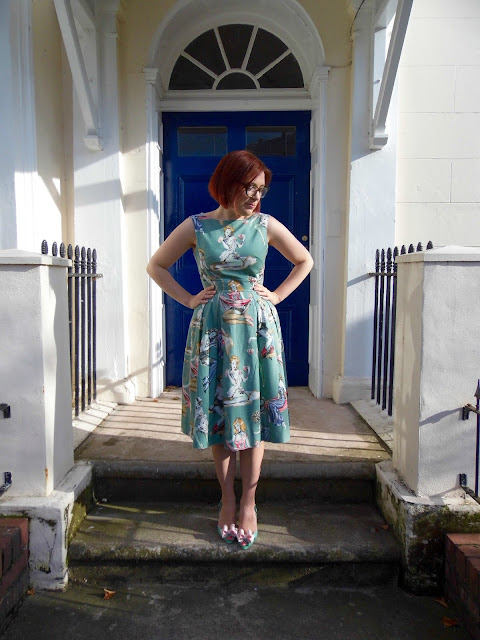 I made this dress at the end of the summer. It wasn't specifically for Hallowe'en because I'm not massively into Hallowe'en at all. No hate, or anything, I just can never get that excited about it because I don't do fancy dress. I actually also find zombies pretty scary - not because I am worried about a zombie apocalypse (I think it could happen but also I know that I have, like, no survival skills, so I will die before the collapse of society, and I take comfort in that knowledge.) I can live with zombie pinups though, especially these ones. One of them is eating a burger that is a human brain in a bap and, as a vegetarian, I can sympathise with that. So many restaurants seem to think that an adequate vegetarian alternative to a burger is to put a fucking mushroom in a bap. A MUSHROOM IN A BAP IS NOT A FUCKING BURGER.

So, yeah. Anyway, I wore this dress yesterday but it's not what I'm blogging about tonight. This is partly because we've all been here before, but it's also total vanity. You're going to have to trust me that the dress looks lovely in real life but it photographs like shit. It looks wrinkled as fuck in photos - maybe this is to do with the colour? I don't know, but it really doesn't look as wrinkled in real life. So I took one photo for the general idea and now I'm going to move the fuck on.

I have a new hand knit cardigan to blog instead. Thankfully this item photographs a bit better... 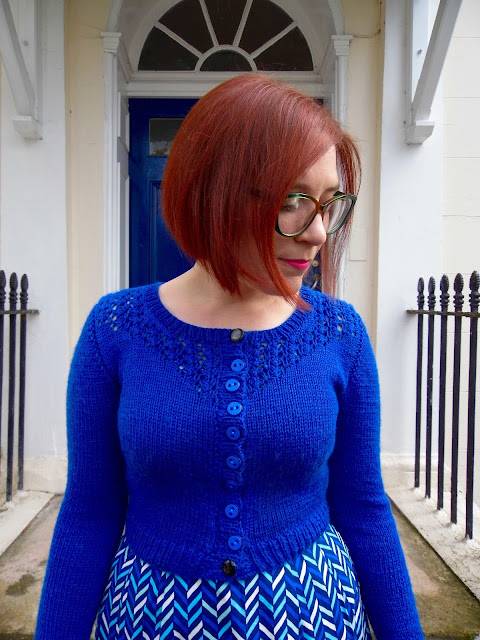 Yeah so it's another Andi Satterlund design. What can I say? Her knitting patterns float my boat. This is the Salal cardigan, from Andi's magazine, Stranded. I really like a cardigan with a fun yoke design, so I knew this one would be for me. 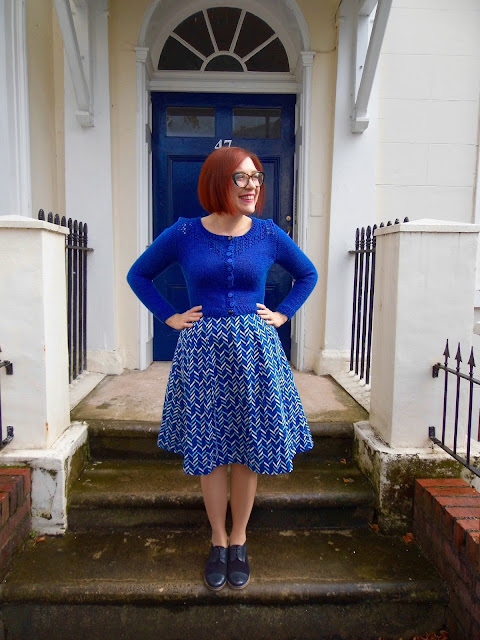 The pattern calls for worsted-weight yarn but I knit this in some Cascade 220 superwash, which is closer to DK. Actually, this is sort of a midpoint between the two and I found that I was able to get gauge with no issues. I love the colour, which is called Cobalt Heather. 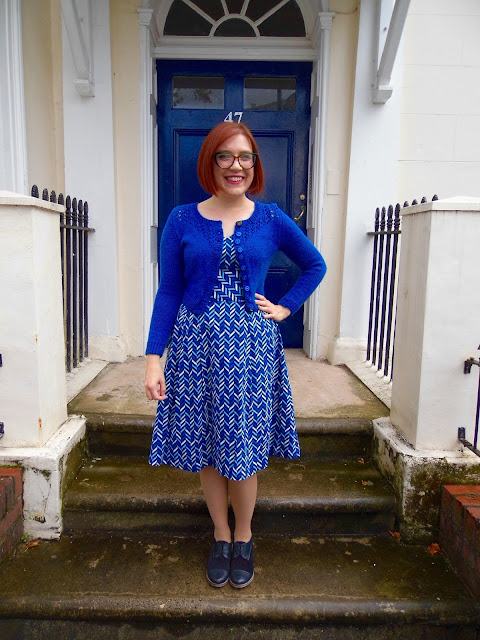 I knit size small and the only adjustment that I made was to knit the sleeves full length - mainly because, in the colder weather, I prefer to have full-length sleeves! It was a really quick and easy knit - the lace detailing on the yoke is very easy to memorise and knits really quickly, and then the rest is just in stocking stitch. I finished the body very quickly and then, as I often do, dithered around for ages before starting on the sleeves. Of course, once I started those, I was able to knit them very quickly - you know, knitting sleeves in chunky wool takes no time at all. Annoyingly, I had bought the buttons some time before I knit the cardigan and when it came to sewing them on, I found that I didn't have enough and, in the meantime, the shop I bought them from had closed down! So I have contrasting top and bottom buttons, which I am going to live with for a while and see how I feel. I might still switch them all for other buttons. 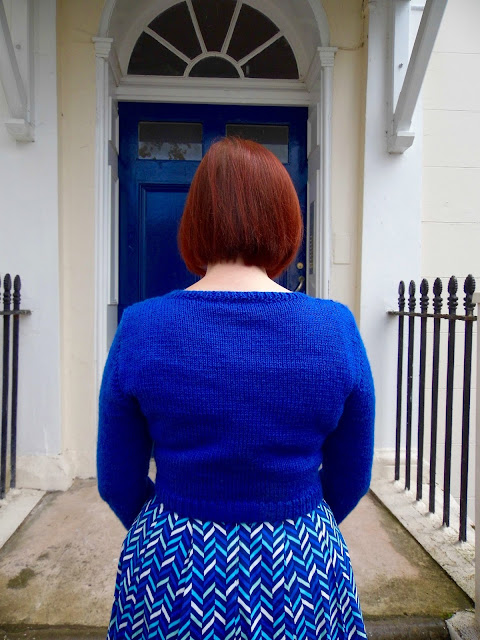 I'm very happy with the fit - the length is exactly what I like in a cardigan and I love the waist shaping. It is a little broad across the shoulders on me, which is something that I have found in the past in Andi Satterlund's patterns, but honestly I think this is such a minor issue that I'm not worried about it. 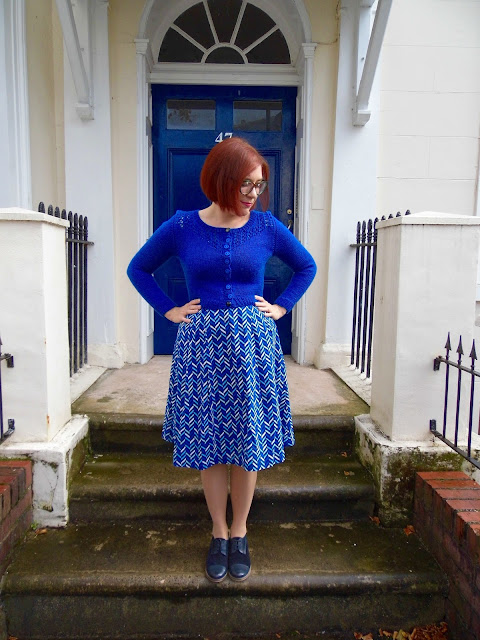 I don't super love this outfit to show the cardigan off - although I will wear the cardigan with this dress, I think the shoes look much better with tights - but I am very pleased with my cardigan and will almost certainly knit another! It's not at the top of the queue, though - I want to knit Andi's Blaster cardigan first and, before then, I need to finish a scarf that I started knitting for Nic. His scarf needs are more pressing than my cardigan needs! I have a lot of cardigans.

So anyway, that's all from me. Last night, we watched The Omen (because Hallowe'een, but also because it's one of my favourite films) and I'm thinking tonight might be the time to give Damien: The Omen II a whirl. I know the same kid isn't in both films but I love the little guy who plays Damien in the first one, especially after reading last night that he got the part because he kicked Richard Donner in the balls.

OMG he is perfect.

So, yeah...until next time. Night all!
Posted by Roisin Muldoon