It doesn't have any eyebrows except on Saturdays and when it yawns it sounds like Liam Neeson chasing a load of hens around inside a barrel.

Evening all! It's been a little while, hasn't it? As usual, life and work has been busy and obviously there has been a lot of news going on. Like many people, I was very upset about the outcome of the American presidential election and it's been sort of hard to focus on the frivolous things in life. I won't talk politics in detail here, but obviously it has been on my mind a lot. Good things have been happening too - as life does still go on, even with awful things happening in the world. That has helped. I don't have any soothing words about this horrible situation - none of us do, sadly.

Anyway. I don't mean to be frivolous, but as I feel at a total loss for words about the current world situation I'm going to go back to what I usually do here, which is to show you a dress I made and talk about it a little bit. Tonight it's the turn of another Emery dress in Cath Kidston fabric. I say 'another' - this one was actually the first one in a recent run of them, but it's just taken me a while to get around to taking photos of it. 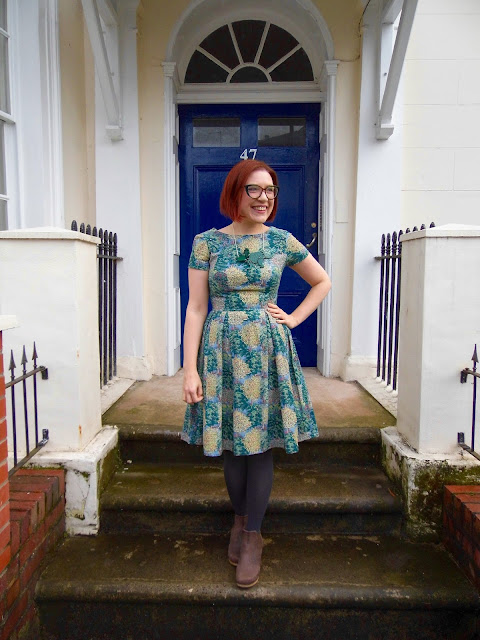 I bought this fabric from the same ebay shop as the rest of the Cath Kidston fabric I have sewed with, but, somewhat unusually, this is a current print. It's called 'Ashdown Forest' and you can buy a dress and a skirt made from it, as well as it being available on bags and accessories. I actually bought it much earlier this year and it sat in my stash for a while. I wasn't sure if I liked it when I bought it, but I reasoned I could make an autumnal dress out of it, so it would be worth getting anyway. The print is lovely, and it has lots of little hidden animals in it: 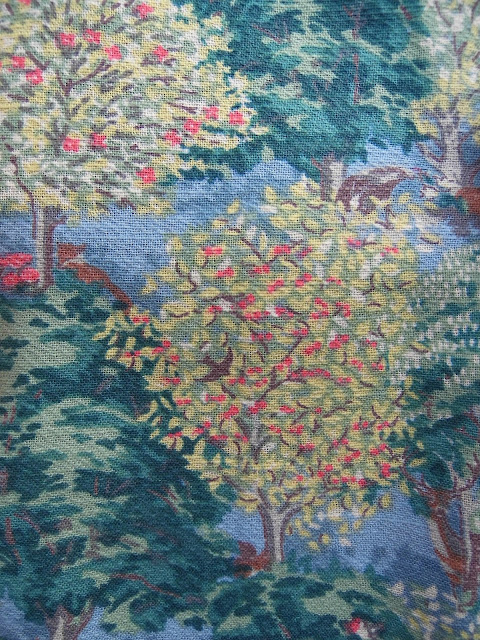 In this section you can see a badger, a fox, a stag, a squirrel and a robin. Pretty neat, right?

There's also another little animal hidden in the print... 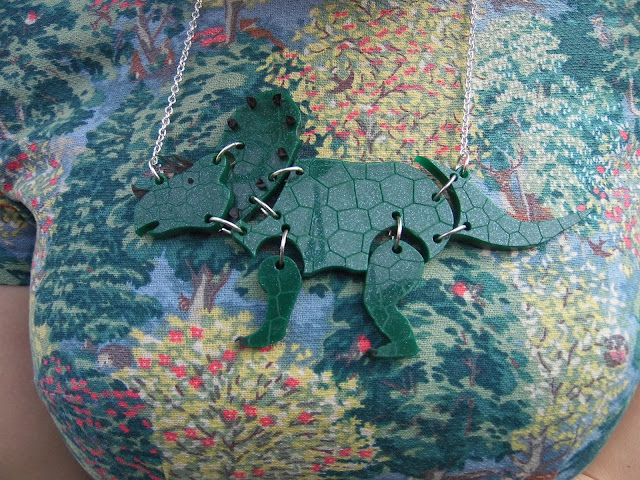 IT'S A TRICERATOPS! I bought this necklace from Black Heart Creatives, and its arrival prompted me to get some photos of the dress. I like the idea of him stampeding his way through the otherwise peaceful forest. I bought the necklace mainly because it's very cool, but also because Nic and I are going back to Northern Ireland soon and I thought it would tickle my dinosaur-mad nephew Joe. I've ordered some dinosaur-themed fabric too, so I'm also hoping to make a dress before we go. 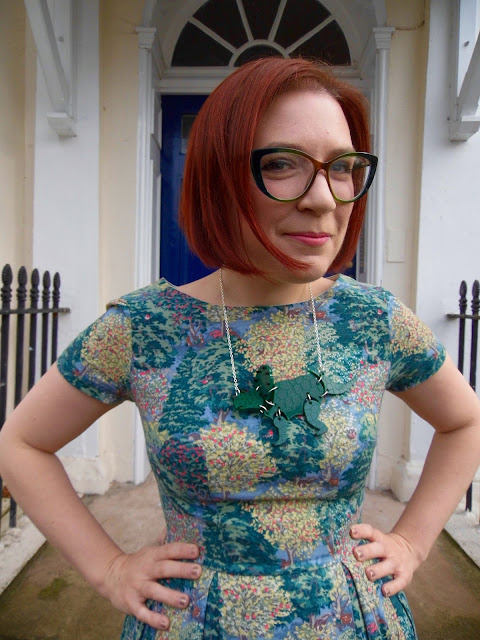 I named this dress for a place I spent a lot of my childhood in: Favour Royal Forest in Aughnacloy, which is the village where I grew up. Favour Royal is out the Augher Road and the forest is open to the public, so we spent many, many Sunday afternoons out there walking with Daddy, often with cousins or neighbours in tow. It's actually part of what once was an estate, but I've only ever known the big house to be boarded up and derelict. Once, at a friend's birthday party, we ventured across the fields and up what remained of the house's avenue to the house. It was much too spooky for us to go in. In my teens and early twenties, rumours surfaced now and again of The Beast of Aughnacloy - a big cat, possibly a puma, that stalked our border village and especially the area around the Favour Royal Road. It was definitely real and almost certainly not part of some sort of sheep-based conspiracy. 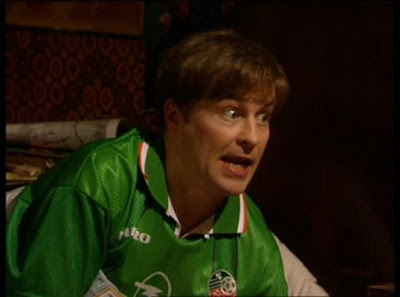 They say it's as big as four cats and it's got a retractable leg so it can leap up at you better. And you know what? It lights up at night. And it's got four ears - two of them are for listening and the other two are kind of back-up ears. Its claws are as big as cups and for some reason it has a tremendous fear of stamps. Mrs Doyle was telling me it's got magnets on its tail so if you're made of metal it can attach itself to you. Oh, and instead of a mouth it's got four arses.

Of course I'm quite sure that Cath had all this in mind when she designed this fabric. I'm just glad to sometimes have an occasion to think about the beast of Aughnacloy, and of happy childhood memories of exploring the forest. I'm very well settled in England nowadays, but a large part of my heart will always belong to County Tyrone. 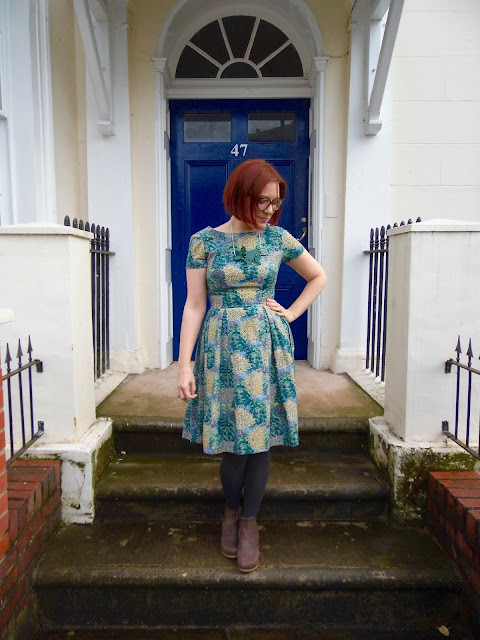 Has it killed yet? No. But it's only a matter of time... No man's sheep is safe.
Posted by Roisin Muldoon