I don't think I've ever been to an appointment in my life where I wanted the other guy to show up.

Evening everyone! You know, it's hard to know how to start blog posts these days because there is so much shitty stuff going on in the world that being all, "Hey, take a look at my dresses and shoes and stuff" seems almost too frivolous for words. It's been stopping me from blogging, to be honest, because it doesn't feel right. But stopping myself from doing things that make me feel good is no answer either, so here I am, because blogging is one of the things that makes me feel good.

It's been a rum few days, but good things have been happening too. On Friday, Nic got an email to say that a funding bid he had submitted for a major research project had been successful. This is really exciting for him and it was really good to get some positive news on an otherwise hard day. I'm really proud of him, because this sort of funding isn't easy to secure and the project is something he feels excited about. We celebrated with champagne and pizza, because that's how we roll, and it was a good end to what had otherwise been a pretty challenging week.

The sun came out on Saturday, which was lovely after a week of freezing fog, and I had a very restful weekend. It is very cold at the moment. I'm telling you this in an effort to avoid getting the inevitable "But aren't you cold?" questions at the bottom of this blog post. It is cold. It's too cold to wear the dress I'm going to blog tonight, for sure. It's going to have to wait until spring now, probably. But, we had one very unseasonably mild day a few weeks ago and I wore it then. But yeah, it is out of season and I am aware of that. Don't worry. I have many coats and I bought another pair of cute warm boots at the weekend. But here is a spring dress all the same: 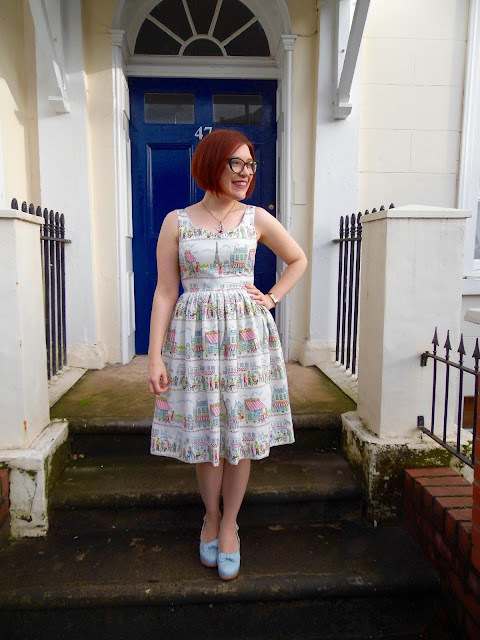 Aww yes. Michael Miller 'Paris Ville'. This is one of my all-time favourite prints and I made a dress from it in 2013 that was a knock-off of a Bernie Dexter dress I loved but didn't want to pay £120 for: 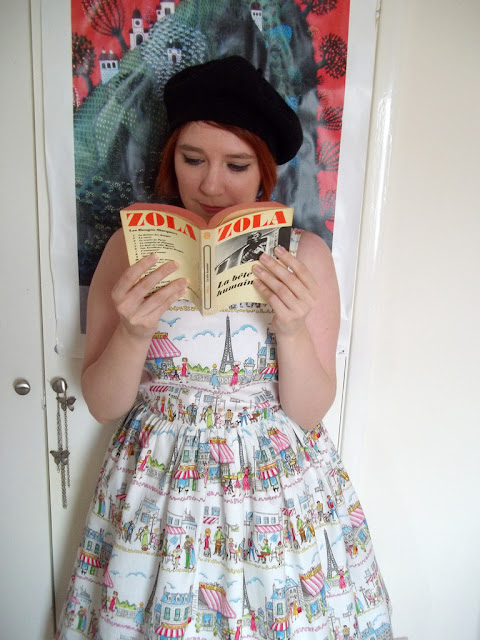 Here's me in the 2013 dress. I had to get photos of it indoors because there was snow on the ground. I never wore it with the beret. Full disclosure, too. I haven't read La Bete Humaine in French, either, although I have read it in English because Zola is the best.

You can read the original blog post here. The pattern I used was New Look 6886 and I loved loved LOVED the dress. It's too big now and the fabric has faded. I wore it once last year and decided that it couldn't be part of my wearable wardrobe any more and that it needed to be archived - which is to say, I've packed it away and will keep it for sentimental reasons. I didn't think of it again until one day when I just took a notion that I wanted that print back, so I ordered myself some more of the fabric and made a seasonally-inappropriate replacement. What's the point of being able to sew if it's not to make exactly what you feel like, eh?

I couldn't find my copy of NL6886 but, to be honest, the little spaghetti straps were not the one. As I had made myself another Bernie Dexter-ish dress from NL6020 - the Prospect Park dress - I thought it would be a likely candidate. And it was! 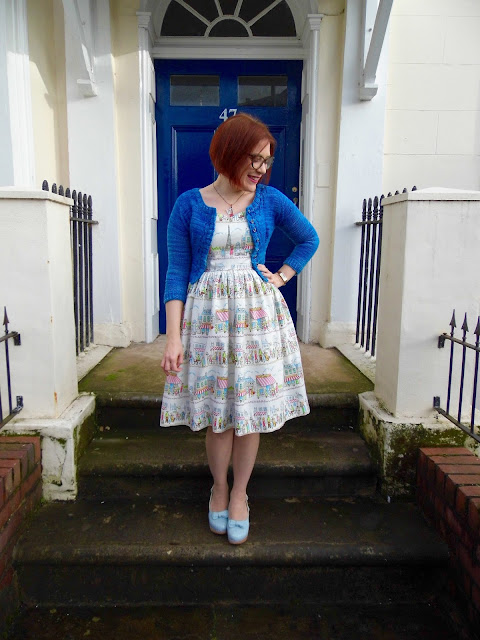 Here I am wearing the dress with an Andi Satterlund Miette cardigan that I knit with some Malabrigo worsted yarn - I'm not sure I ever blogged this, but I knit it sometime last year.

I sewed this dress just after Christmas and I had a lovely little afternoon to myself. Nic was watching an old Douglas Wilmer Sherlock Holmes episode - The Six Napoleons - hence the name. As with the other versions of NL6020 that I've made, I mixed up some of the pattern details. The front bodice is from view D and the back bodice is from views A and B (it has a v-back, which I didn't get a photo of) and I moved the zip from the side to the centre back. I did this by not cutting the centre piece from the back bodice on the fold, instead adding a seam allowance to it. I sewed the seam allowances at 5/8 (rather than the 3/8 the pattern calls for) except for the side seams, which I sewed at an inch. 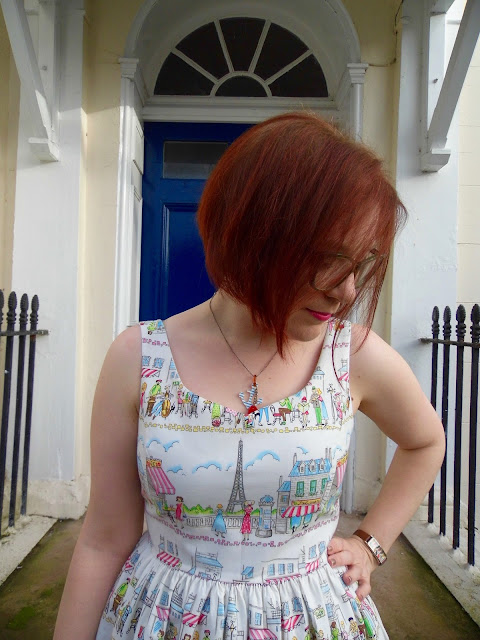 I'm really pleased with how the dress fits, and with my pattern matching along the princess seams - this is something I'd never attempted before. Not that it's difficult, but I'm still pleased by it!

The wider straps of this dress make it more wearable than the original - the straps on that were narrow and wide-set, so I mainly had to wear it with a strapless. Even despite that, it was so well-loved that I know this one will be too. I'm glad to have it back. I just need to make it through to spring! A trip to Paris is a possibility for later in the year, and you can bet your bum I'll be bringing this with me if we do go. I'm that kind of girl and I don't even care. 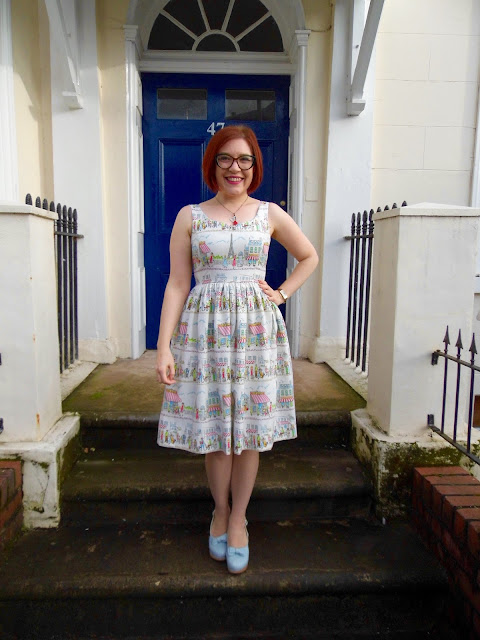 So look, that's the craic with me. I'm not ready to talk about the world yet, but I'm glad I came and spent some time talking about pretty dresses. Now it's time for me to mosey on, though. Nic and I have been watching The Jinx so I'm going to go and have an episode of that. Until next time, mes amies!
Posted by Roisin Muldoon