Hola! A slightly belated happy new year, everyone! I hope you saw in the new year in the style that suited you best. Nic and I had a really lovely, relaxing break. On the 30th, we went to London as Nic had booked us a night in a nice hotel as a treat. We spent the Friday afternoon pottering around Kensington and Chelsea, which was very atmospheric in the heavy mist. On the Saturday, we started the day with a champagne brunch at Caravan before heading east to the Barbican to spend a few hours looking at the art of the vulgar.

It was as good a way as any to wave goodbye to 2016 which, like many of us, I was only too glad to do. Lots of good things happened for us in 2016 - I was promoted, Nic's book was published, we had lots of lovely trips and holidays and I gained another beautiful nephew. But it was also a hard and sad year in many ways - personal, as well as global. Like many of us, I am afraid of what 2017 has in store. I'm more angry about things than I have ever been. All I can do is to try to use that anger in a positive way, in both small ways and large.

That's about as reflective as I'm apt to get here at the moment. I have goals for 2017 but none that I especially want to share. None of them are sewing-related - but, then, this is something that has worked well for me in the past. I like sewing what I like to sew and, because I sew what I like to wear, I end up wearing it. It's pretty simple.

And, speaking of simple, here is something that I sewed recently. New Year's Day was cold and rainy but I was un-hung-over and spent the day sewing. It was a good start to the year. I finally cut into some fabric that I've been hoarding since last March - some gorgeous Cloud 9 poplin that Colette sent to me: 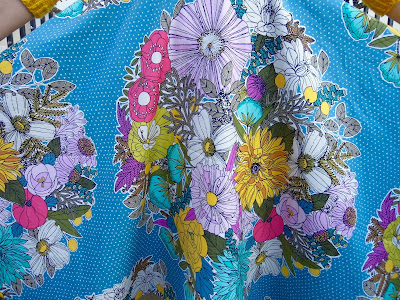 The print is called 'Bouquet' and the designer is Sarah Watts, in case you'd like to try to find any. Colette sent me loads of this - I think four metres - so I had lots of play with. As I wanted to make the most of the fairly large-scale print, I thought something with a circle skirt would be the way to go, so I decided to sew another Retro Butterick B5748: 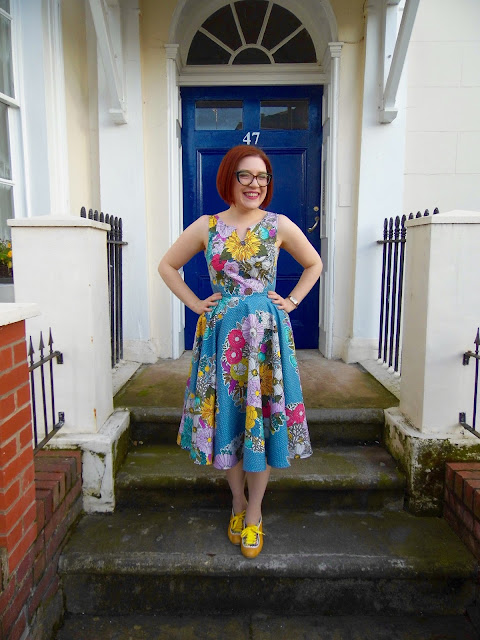 Clearly so pleased with myself/cold that I had to have my eyes closed in that photo, oh well. I've made this dress many times before so there's very little to say. This time, though, I was inspired by Amy to finally try a version with a notched neckline. 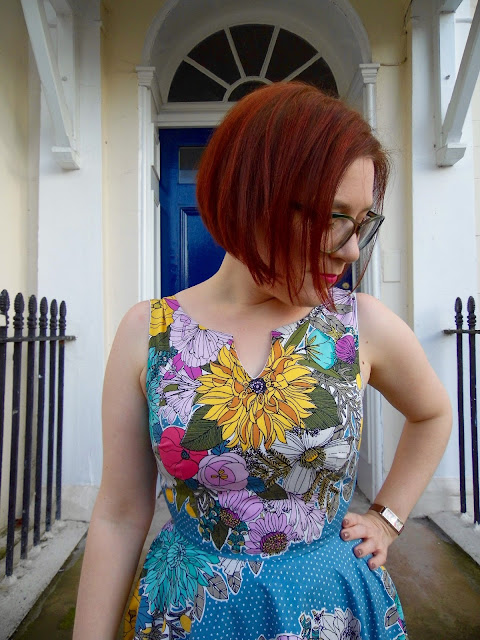 There's not even too much to say about that - it was about as simple as it looks. I quite like it, as it breaks up the very busy print next to my face but I think it's also kind of a shame to break the print up there. In any case, I think it's a very pretty detail. 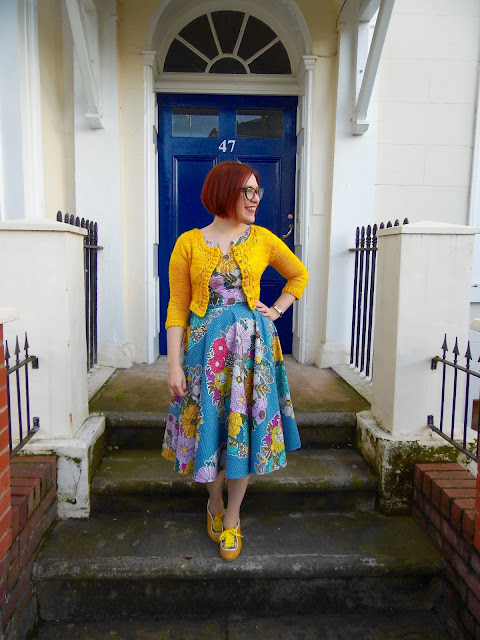 The only other change I made was to lengthen the skirt slightly, because I had enough fabric to do so. I used some bias tape to face the hem which, combined with the slightly heavier fabric, gives the skirt  some body. I'm not wearing a petticoat in these photos, although I suspect it would look pretty dramatic and fun with one underneath. It would have kept me a bit warmer, as well! I wore it like this - with shoe-boots and a hand-knit cardigan (it's the Miette, by Andi Satterlund) - to meet some friends for drinks on Bank Holiday Monday, but I'm looking forward to wearing it in the warmer weather with my yellow clogs. Or pink ones, or blue ones, or purple ones. I have lots of choices because I have lots of clogs!

So that's the craic there. It was good to finally use this fabric because it is so pretty and I love the finished dress, and also because I needed to make room in my stash box for some Vlisco fabric I bought just before Christmas: 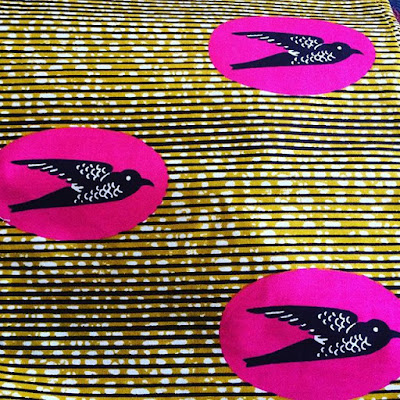 I haven't decided what I'm doing with it yet. Something fun, I hope.

So that's my lot for the evening. I'm going to leave you here and go and maybe have a gin and tonic. Goodnight!
Posted by Roisin Muldoon