It's a salad, only bigger, with lots of stuff in it.

Hey strangers, what's happening? Yet again, it's been a while, but that's just how life is at the moment, I'm afraid. The last few weeks have been quite difficult, as my granny died on Easter Monday. 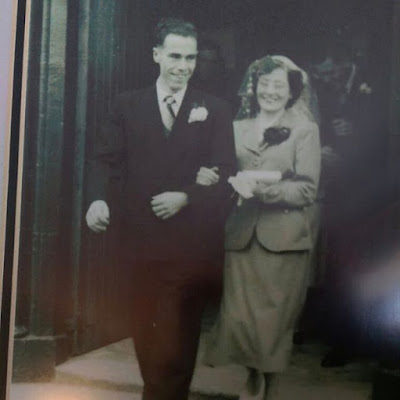 My grandparents, Francie and Molly, on their wedding day (13th July, 1954)

It wasn't unexpected, exactly. Granny fell and cut her leg last summer and it didn't heal, so in the autumn she went to a nursing home. It was actually a really nice nursing home but understandably, she hated it there - probably because she knew she'd be unlikely to go home again. The last time I saw her was when I was at home in January, and I actually knew that that it was probably the last time I would see her. She died on what would have been my granda's 87th birthday (he died in 1999) and my mum and two aunts were there with her when she died, so it was as peaceful and good a death as you might ask for. I was mostly relieved when I heard because it felt like it was her time, but of course it was heartbreaking as well. Nic and I flew home to Northern Ireland the next day, and her funeral was that Wednesday. It was a lovely funeral and it was good to have some time to spend with my family (we stayed until the Friday) but since then I have been feeling so sad that she's gone. 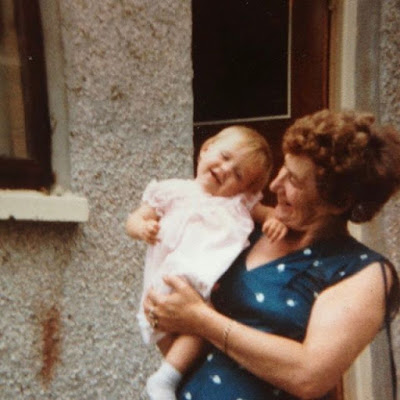 Obviously this is totally normal, and I know that it's a good thing that she isn't suffering any more. Still, I'm sure you can understand that it's hard to accept that I'll never see her again. The moment when I lost my composure was watching her coffin leave the house, knowing that her house will never be the same again. I'm lucky to have had such a close relationship with her throughout my childhood and into adulthood, too. One of the nurses who looked after her before she went into the home told me that Granny was so proud of my sewing and pointed one of our wedding photos out to anyone who came into the house to say that I had made my dress. She love pretty, colourful clothes and was always keen to see what I had been making and wearing. We were very alike!

So anyway. Work has been as busy as ever but I'm a vaguely celebratory mood tonight, having got through one of the biggest days in our work calendar without any issues. Also, after a long and torturous recruitment process (not that long or even torturous, it just feels that way) I've filled the vacancy in my team that I've been covering since December. That hasn't been without its issues, but it'll be so good to go back to just doing the one job!

And that is some of the craic with me. But you're here for the sewing, yeah? And maybe the shoes? Here's a dress that I made...um...in March, according to my instagram: 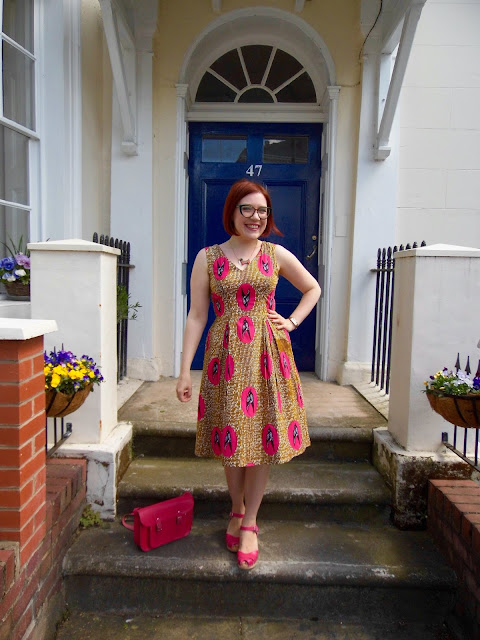 The pattern is Kwik Sew 4097, which I bought after seeing Annie from The Enantiomer Project's version last autumn. I'd never knowingly sewed a Kwik Sew pattern before, and I don't think I would have bought this one based on the pattern envelope because, lol: 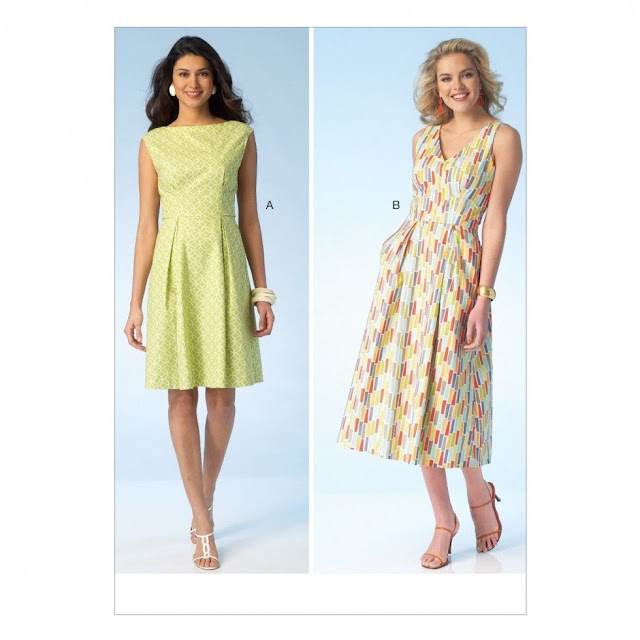 Both of the models here are giving it plenty, for sure, but like... it's not totally inspiring. Annie's version was so cute though, and the line drawings were good, so I gave it a go. The finished garment measurements put me in a size medium, but the ease on this dress is crazy. I mean... there is a lot of ease, which is not at all what the samples on the envelope cover suggest. I ended up sewing the XS with 1-inch side seams (after a toile) and, having actually lost a little weight since I made it, I had to go back last week and alter it further. So guys - if you're making this one, check the finished garment measurements and the ease given on the pattern tissue, because it is wild. Kerry recently wrote a post about ease in sewing patterns that's worth a read, by the way.

I'm really happy with the finished dress, though - it is such a cute pattern! The bodice has pleats rather than darts in both front and back, and the skirt is pleated in a really interesting way. You make a little box pleat and then a bigger box pleat over the top of it, which gives the skirt a lovely shape. 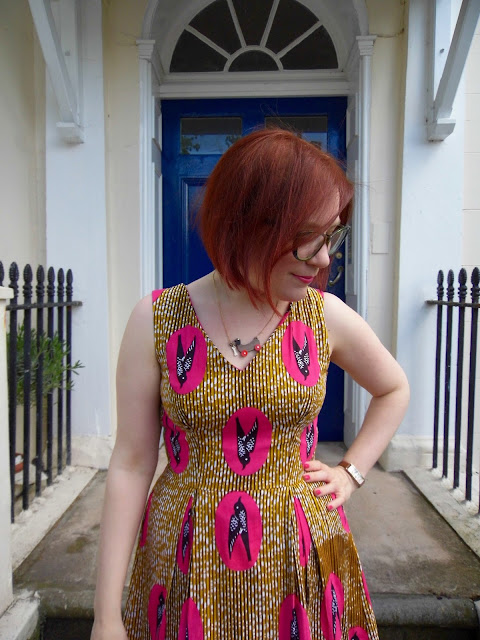 My fabric choice kind of conceals the design details because of its graphic print, but I'm sure it would look great in a solid fabric (for someone else though, obviously!) I love how it works with this print, though, which is a beautiful Vlisco wax cotton that I bought in Birmingham rag market earlier this year. I spent a bit of time figuring out how to use the fabric - the bird motif has the bird flying parallel to the selvedge, so to have the birds flying left to right, I'd need to cut it on the cross grain. After thinking about it for a while, I decided that I liked the idea of them flying up and down, although it makes the birds seem less bird-like. 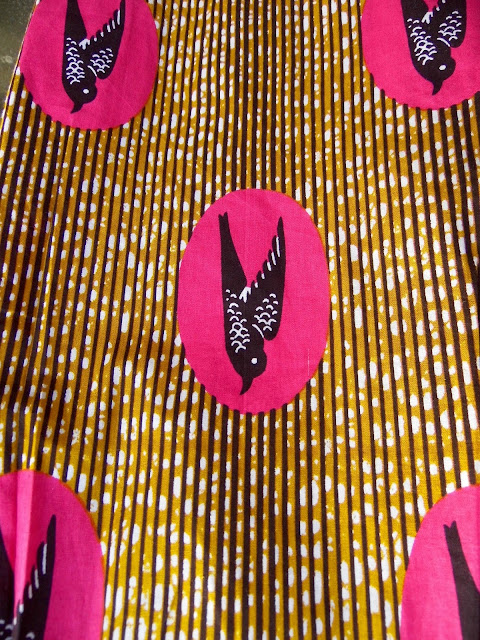 I still have loads of this fabric left - I bought a 5-metre piece - so it'll be a challenge to use such a distinctive print in a different way if I decide to make another dress from it. 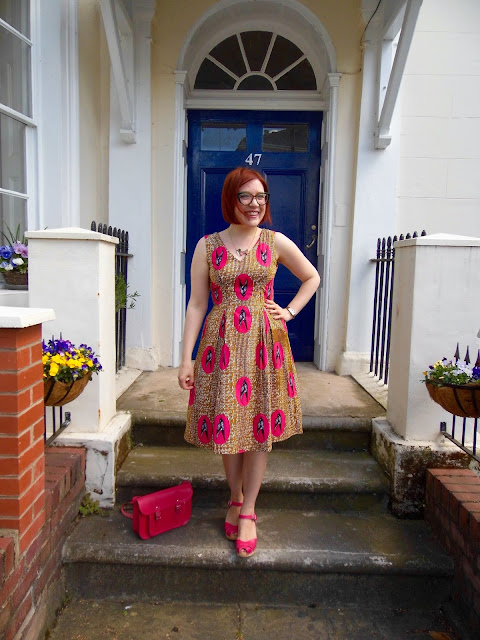 This photo is basically identical to the other one...oh well!

My copy of the pattern is currently on loan to a friend, but I'm definitely here for the idea of making a maxi version of it, probably in another wax cotton. You know I have a weakness for wax cotton maxi dresses and I'll be going to Paris in a few weeks, so I'll be keeping my eye out for a suitable print. The  midi length version of the skirt from the pattern envelope is basically maxi-length on me, so lengthening it won't be an issue. It's definitely made me think I need to get over the fact that I hate the name Kwik-Sew so much (seriously...the spelling makes me wince) and check out their other patterns. Once I got my head around the ridonkulous amount of ease and had made my usual adjustments, I was pretty happy with the fit and the drafting.

So that's the craic with me anyway. Thanks for hanging in there - and hopefully it won't be as long again before I'm back. Au revoir!
Posted by Roisin Muldoon