Culture, mate. That's where the hope of the world lies. And a more cultural mob than us you wouldn't find outside of the Chelsea Embankment.

Hello lads and ladies! Happy Friday - I hope this week has been treating you well. I have had a very full week at work, which has actually been really enjoyable. The period between September and January is a crucial one in my line of work, and after a difficult summer it feels good to put my shoulder to the wheel once again. While I wouldn't describe myself as a workaholic, I do feel much better about myself when I feel I am being productive at work, and that is how I have been feeling this week.

This week we booked a minibreak (I always feel like Bridget Jones when I use the word minibreak, which is pleasing) to Perpignan. We're going to be there for a long weekend over my birthday and I am very excited. I'm a little nervous that my schoolgirl French won't cut it outside of multicultural Paris, but I'm sure I can make myself understood all the same. As the weather here has been ridiculously shitty (stormy, rainy but still somehow disgustingly sweaty) I'm looking forward to a little bit of Mediterranean sun, and I'm enjoying telling people I'm off to the South of France, even though Perpignan is decidedly NOT the Cote d'Azur. I'm going to try to fit in making a birthday dress between now and then - I have plans for a B6453 in some cotton sateen that I bought last year in New York. Fingers crossed I have time to give it a bash this weekend!

This afternoon I'm going to show you a dress I made in the heady days of the summer. Well, by 'summer' I mean 'slightly better than whatever the fuck this shit is', yeah? It's another Butterick B6446, which I made because I love my lemon-print one so much.

The fabric is some cotton sateen. I had spotted it first in Edinburgh Fabrics when we were there in July, but for some reason I didn't buy it - it was warm in the shop and I was tired AND hungry, so finding it difficult to make decisions - but once I saw the beautiful B5748 that Abi made from it, I knew I had chosen unwisely. I ended up finding some on ebay and that was a happy end to the story. 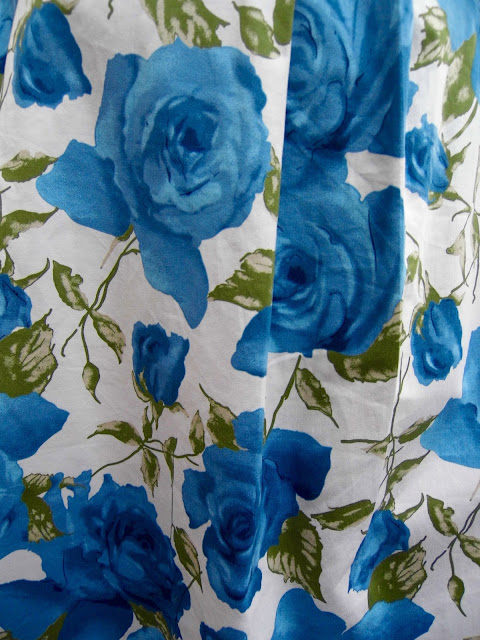 I actually already have a dress in blue rose print. Of course I do: this is me, after all. It's my Lucy dress made from Liberty Carline fabric. 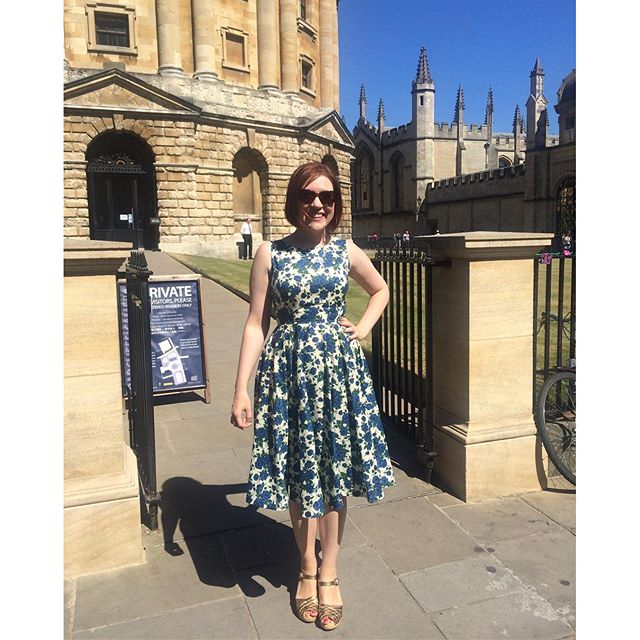 I love the shit out of that dress, and I wore it loads in the spring and summer. This cotton sateen is a bit weightier so I think I can wear it as the weather gets a bit colder, so it's all good. 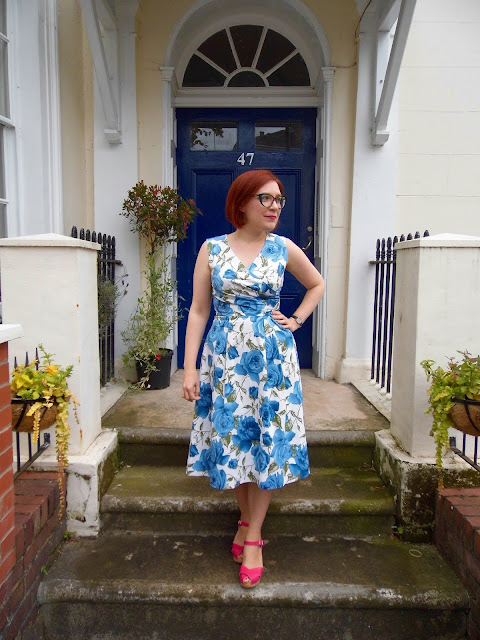 I didn't make any extra adjustments to the pattern following the success of the Good God, Lemon dress, so this baby came together really easily.

The whole thing was very nearly ruined by some bullshit, though. The first time I wore it was out for drinks and dinner with Nic on a rainy evening and although the dress looked amazing with my lovely V&A umbrella, I got screamed at in the street by a man after two other men pushed me into him. Even after I apologised (which, for some depressing reason of social conditioning, I guess - I apologised even though I had been shoved by two strange men into another strange man) he continued to scream and swear at me. It was horrible! You know the way that an experience like that can ruin a place or a garment? Thankfully that didn't happen - the dress is far too cute to take the blame for the fact that men are trash, and so I made sure to wear it again and make happy memories in it instead. 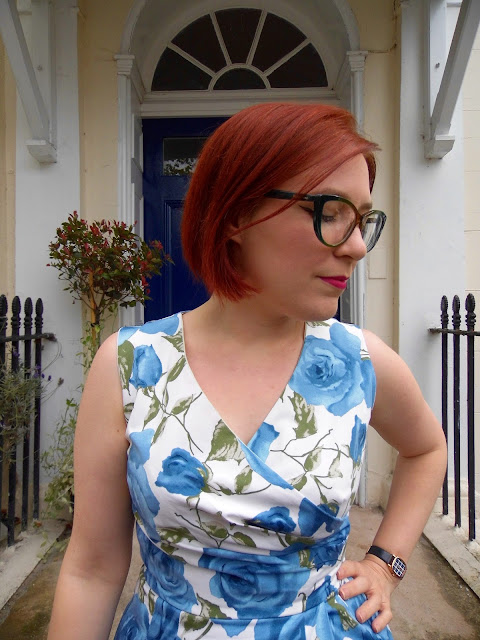 This is the face of someone who hates men.

Seriously though, men can get to fuck. 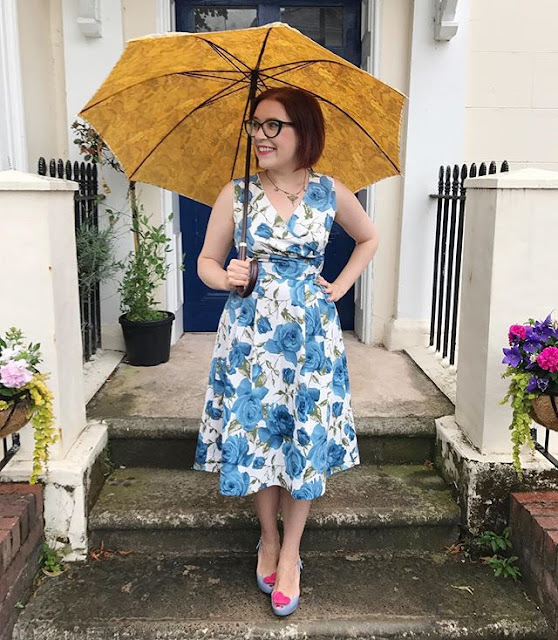 On the night in question. It's a shame, too, because I was feeling so cute with my Vivienne Westwood shoes as well. Don't worry too much, though - after I had a little cry about it in the pub toilets I had a couple of gins and went for a delicious dinner.

I've made lots of blue dresses this year - Rhiannon may have to give over her 'more blue fabric' tagline to me if she's not careful - and I really like accessorising this dress with pink. In these photos I'm wearing it with some pink sandals I bought from the Swedish Hasbeens sale. They may be very similar to another pair of pink Swedish Hasbeens that are sitting on my shoe shelves but, importantly, they are NOT THE SAME and so I am able to sleep at night. I am trying to make myself sew other colours but for some reason I have been drawn to making and wearing blue clothes. Eh, I don't know. It gives me an excuse to wear my many pairs of pink clogs, I suppose.

And that's the craic with me. I have a nice relaxing weekend planned. Having finished my re-read of It last weekend (I think this is maybe the fifth time I've read it since I was a teenager) I'm about ready to go and watch the new film, so we're off to do that (and no doubt a spot of fabric shopping) in Birmingham tomorrow. I'm sure I'll like it, but as for many people of my age, I don't think it's going to come close to how iconic the 90s miniseries was. Like, you know. Where's John-Boy Walton? Where's John Ritter? Where's the Ralph the Santa guy from Cagney & Lacey? WHERE'S RAY FROM SISTER SISTER?! I'm telling you it's iconic. 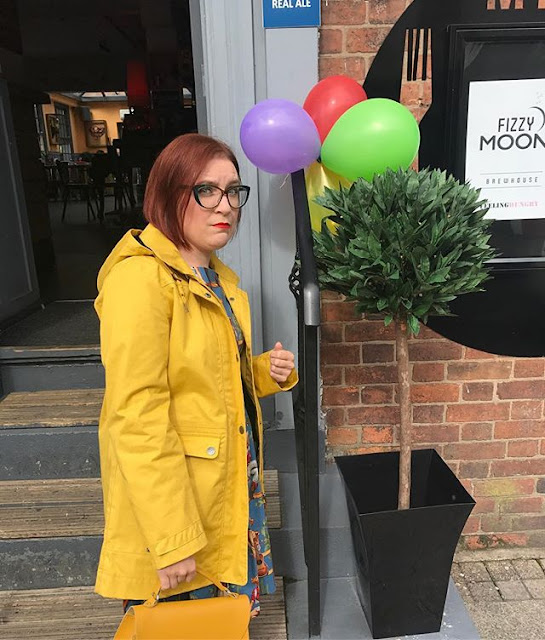 And I flat out do not believe any actor can come close to how terrifying Tim Curry is as Pennywise. But, you know, I'm sure it will still be kind of fun. Have a great weekend, everyone! 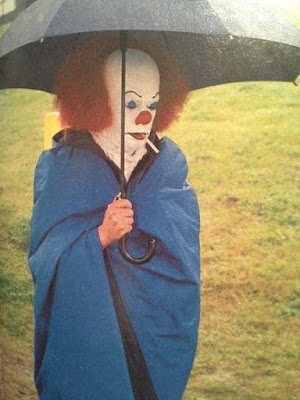