The sea was angry that day, my friends, like an old man trying to send soup back in a deli.

Hello there! It's been a while, I know, but the blogger part of me hasn't died completely!

Anyway, I haven't been up to much since I last blogged. I've been working and sewing as usual. Nic and I had a trip to Liverpool a few weeks ago, which thankfully coincided with a few sunny days in a sea of grey and rainy ones. We had a great time: Liverpool is an amazing city. We weren't there for any particular reason, but it was perfect for a little change of scenery. 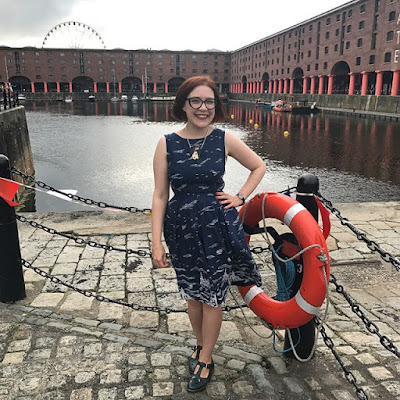 We stayed at the Pullman, and really enjoyed being based by the docks as there is so much to see and do down there. We even spent a happy hour on our last morning watching jellyfish in the marina - it was the first time Nic had ever seen jellyfish, and you could so easily miss them.

When we're on holiday, I like to go on a ferry if one is available. Luckily, Liverpool has a ferry. It's not very widely-known, so maybe someone should consider writing a song about it. 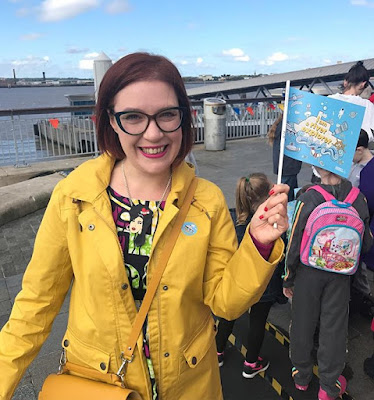 Waiting to board the ferry, dressed like a sailor

We visited some friends in Chester, went to Port Sunlight, went to a few museums, drank champagne in a Titanic-themed bar, visited the Metropolitan cathedral, ate pizza slices on Bold Street (repeatedly) and played some late-night indoor mini-golf: 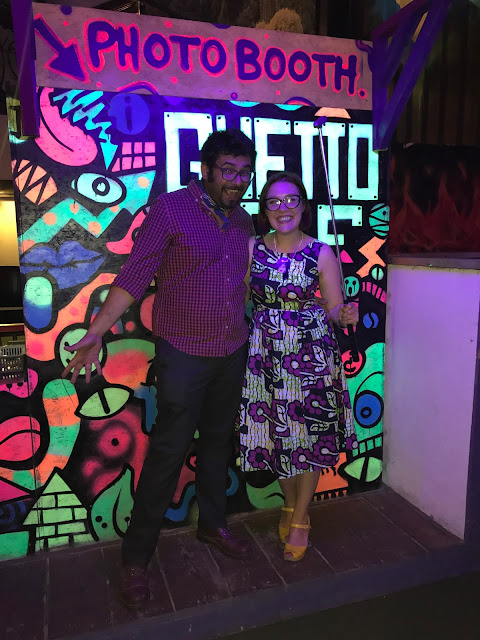 I won, but Nic was a few pints ahead of me at each stage, so I had a slight advantage there.

It was a lovely week off, and we ended it with a flying visit from my dad. He was over for a few days for work and on the Friday we went to the Cotswolds for a few hours. We visited Stow-on-the-Wold and Bourton-on-the-Water. The villages are charming, but Nic and I have been watching Children of the Stones, so it all felt a bit creepy to me. My dad thoroughly enjoyed himself, though. 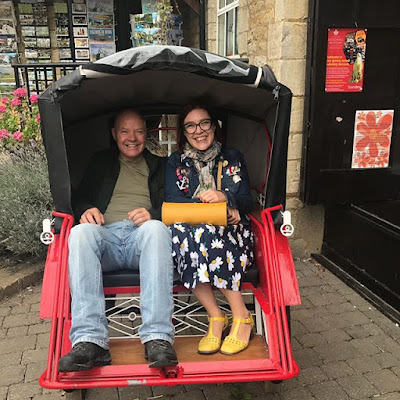 Me and Daddy in Bourton. It's very plain to see we're related as we are BASICALLY IDENTICAL.

These have been some bright spots in what has otherwise been a very difficult few months. I've written before about my mental health, so I won't labour the point, but this summer I've experienced intense anxiety, which has often been debilitating. It has taken all of my energy to keep doing the things I need to do - things like getting out of bed and eating and working - and it's been very difficult. I have felt very tired of living. There have been some external stressors and some of it arises from the fact that I'm generally quite an anxious person anyway so this is something I'll always need to deal with in one way or another.

Helping someone close to me through a problem that they were having made me realise that I needed to allow people to help me, and that it was okay to do that. So that's what I've been doing and I've been looking into finding some professional help too. Something has started to shift and I feel more hopeful and positive than I have for a while. I have a lovely life and I want to be here, and I wanted to share this with you all because I know lots of you care about me. Thank you for caring.

That's the update there. I've been sewing off and on, and over the unexpectedly sunny bank holiday weekend, Nic took some photos of a recently completed dress. The craic with this is that Sarah sent up the bat-signal to let me know that Textile Express were selling a fabric I'd been after for about three years: 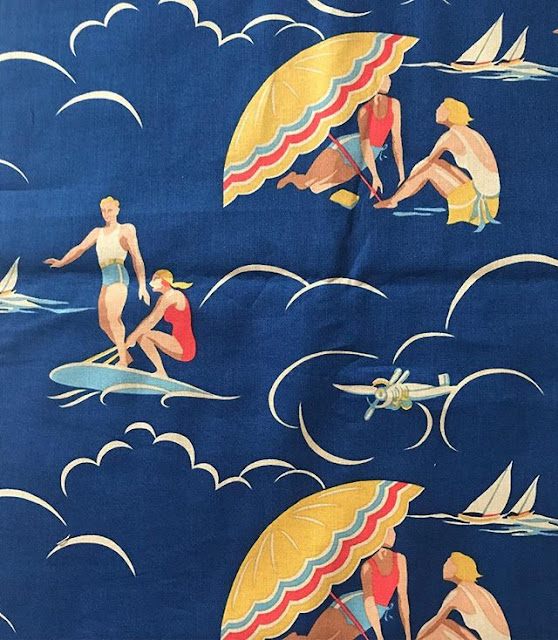 I had seen a Ralph Lauren skirt made from this beautiful linen three years ago in TK Maxx and the fabric had been a bit of a unicorn since then, but here was Textile Express selling it for £6.50 a metre! I immediately bought three metres, which was just as well because they sold out within a few hours. Although summer is by now officially over, I had some hopes for a September Indian summer, so I decided to go ahead and sew it anyway. I was immediately rewarded with a beautiful, hot bank holiday weekend: winner!

The print is quite large, so I wanted a simple shape to show it off. For me, this means sewing an Emery dress and that is what I did. 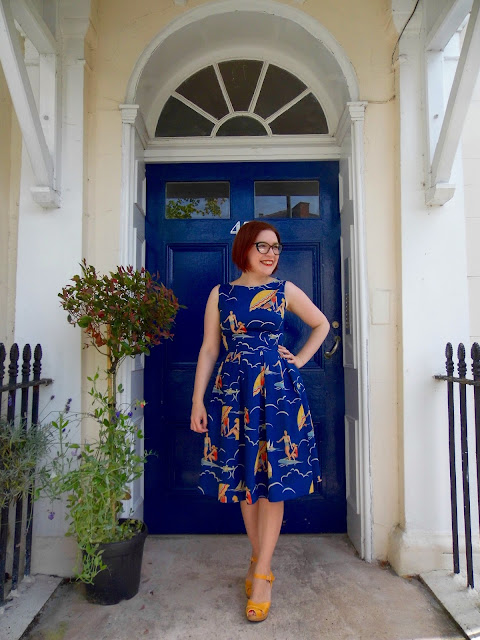 I wasn't sure whether to centre the big beach umbrella on the bodice. It seemed like the obvious thing initially, but when it came to cutting I didn't want to sacrifice the surfers, so I made sure to get them both on the bodice. The fabric doesn't have a great deal of drape to it, so I used a box-pleated skirt rather than a gathered one. I love wearing pleated skirts and I am really thrilled with how this dress turned out. 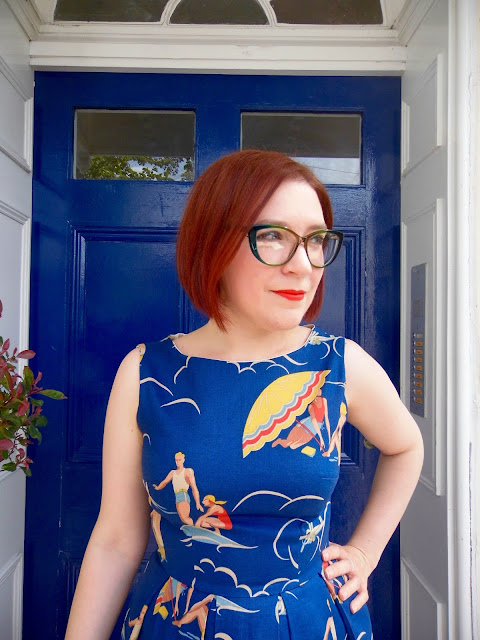 I decided against wearing this with my Lou Taylor swimmers necklace this time, but I think they would be the perfect match!

This fabric really was an incredible find, especially for £6.50 per metre. The colour is beautiful and it's of such lovely quality. I got so many compliments on the dress all day, and I felt great in it too. I've heard that it can still be found in some branches of Abakhan (although I didn't see any when I was in the Liverpool branch a few weeks ago) so you might get lucky if you're still looking for it. I'll hopefully be able to wear the dress a few more times before packing it away for next spring, but often it's nice to make a summer dress at the end of summer - something to look forward to for next year. 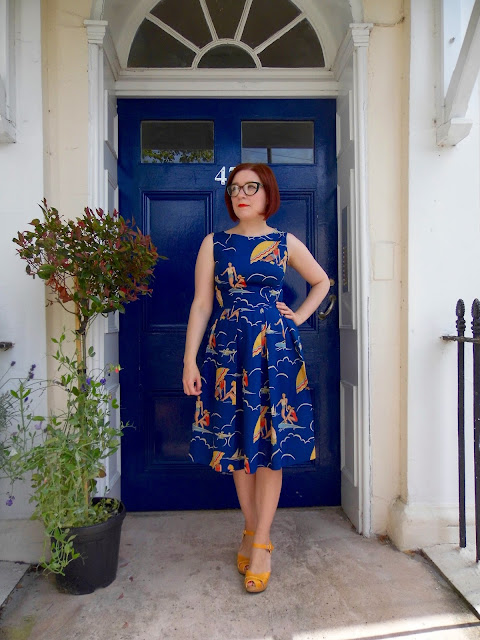 Here's one for the folks at GOMI who think it's obnoxious when I smile in photos. I must remember to try harder not to look too happy with my life.

I haven't yet made plans for autumnal sewing, but I think I'm going to make a conscious effort to move away from my the blue colour palette I've unintentionally adopted this year. I bought some very Mildred Hubble-esque Paradigma boots in a local shoe shop that was closing down, so I'm thinking about what to sew to wear with them: 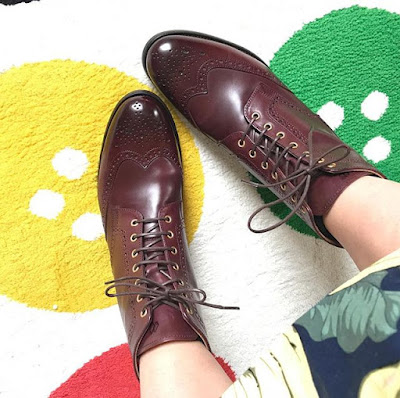 I don't have a coherent autumn-winter plan, though, as I am also semi-seriously considering buying a ridiculous hot pink Ted Baker coat. I don't need any more coats, but it is amazing. It won't work with these boots, but I'm sure I could still make it work with something in my wardrobe...

The sun is shining now though, so right now I'm going to enjoy the rest of the summer as much as I can, which means going to a pub garden with some friends. Have a good weekend, everyone!
Posted by Roisin Muldoon