I find the mystery genre disgusting. I hate being titillated.

Hello everyone! I hope that the early days of autumn (or spring, for those of you in the other hemisphere) are treating you well.

I'm not too bad, myself. It was my birthday a couple of weeks ago. It fell on a Monday, which meant I was able to spend the whole weekend prior to the day celebrating. If you can't stretch your birthday out for a few days, what even is the point of adulthood?! I had dinner and drinks with my friends in Leamington on the Friday night (champagne, followed by Nando's because I'm classy, followed by a thorough spoiling in The Drawing Board) and on the Saturday morning we flew to France for a long weekend. This was Nic's birthday present to me and it was wonderful! 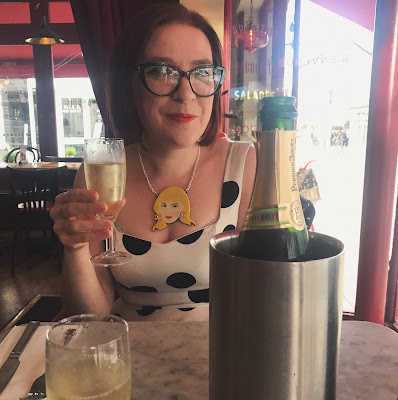 Me, Samantha Jones (from Lou Taylor) and pre-dinner Perrier-Jouet.

We went to Perpignan, which is in the south-west of France, on the border with Spain. Literally our only reason for choosing this destination was the fact that we could get there quickly and cheaply from Birmingham. The fact that we were able to enjoy some Mediterranean sunshine was a very happy addition to our plans - we had considered Copenhagen, Amsterdam and Naples, but everything lined up most easily with Perpignan. Of course, it was all good until the week before, when R**nair started cancelling flights left, right and centre but luckily our flights weren't affected. It would have taken the shine off the holiday a little, wouldn't it?!

As such, we went to Perpignan with no real expectations and we were rewarded with warm weather and a very pleasant location for a short holiday. We were only there for a short time and it was off-season, so the city was unusually sleepy. This suited us fine, but it did mean that we had to plan our meals a little bit more carefully than we usually would on holiday. We stayed in Hotel de la Loge in the old town, which was quirky and charming. It lacked the polish of a chain hotel but it was clean, spacious, quiet and comfortable. I would definitely stay there again. We only had two full days, arriving on a Saturday afternoon and leaving on the Tuesday evening, so our plan was to spend Sunday exploring Perpignan and then spend the Monday (my birthday) by the sea in nearby Collioure.

Perpignan old town is a charming warren of narrow cobbled streets. We picked up a picnic In Monoprix and headed to the citadel at the south of the city - the Palais des Rois de Majorque. We had wandered past it the evening before but had no idea of the grandeur inside - you can't tell from the street at all! It was free to get in on a Sunday, but the modest cost of 4 euro would have been more than worth it for the spectacular views over the region. 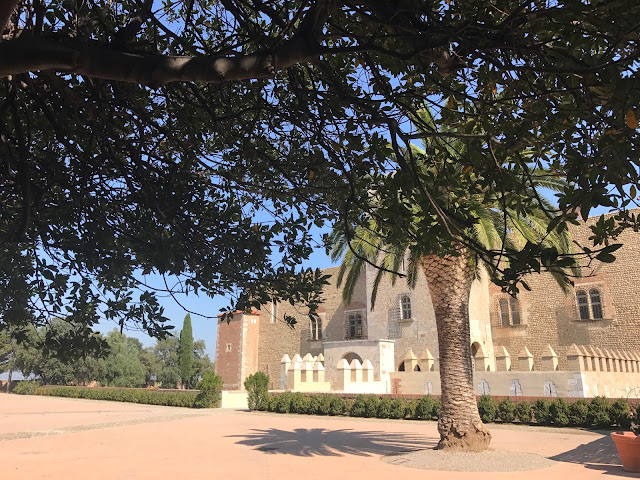 The view from our picnic lunch. I had been so starved of sunshine that the palm trees never stopped being a novelty! 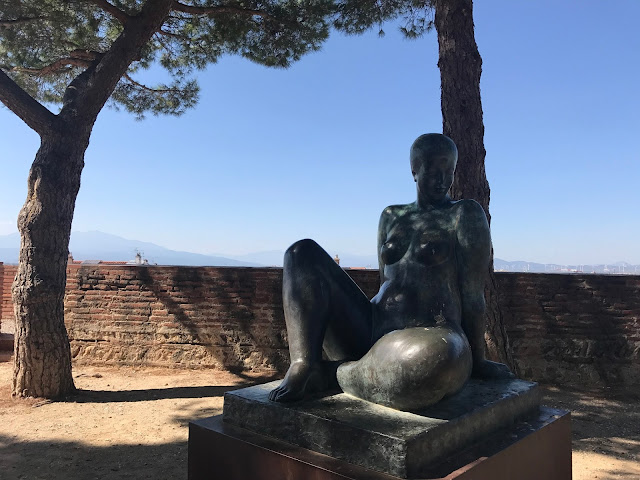 Can you see the Pyrenees in the background? 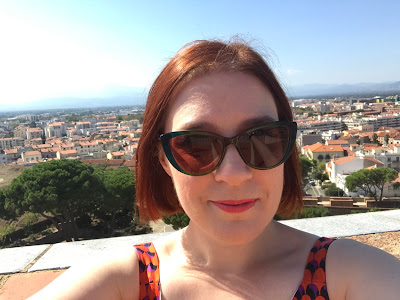 If you can see past my giant head, the view from the top of the citadel's tower was amazing. 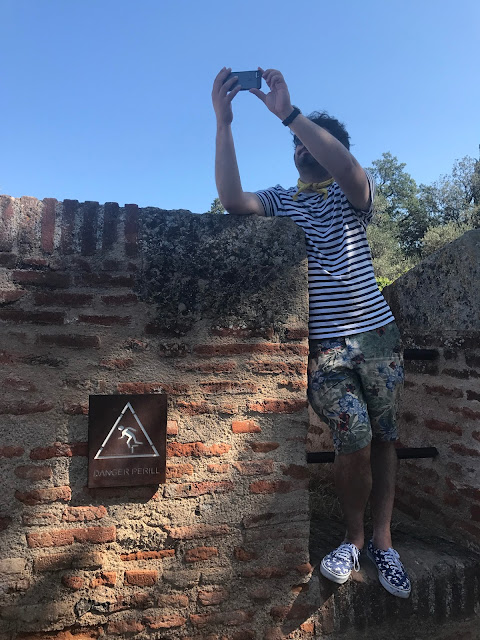 In fact the views were amazing in every part of the palace. So much so that Nic disregarded these severe warnings: 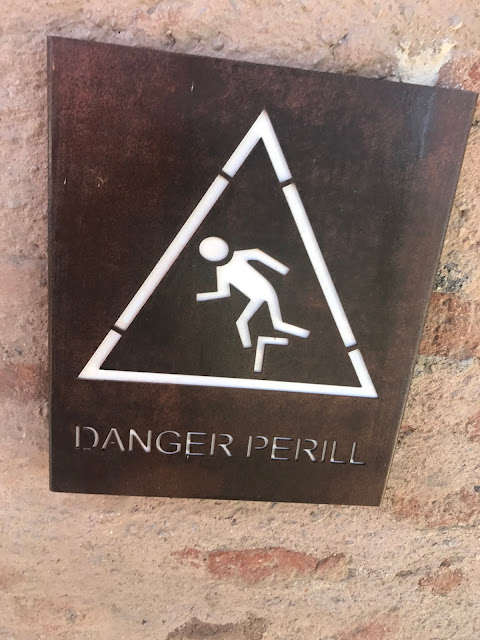 After spending a happy few hours there, we headed back into the city and enjoyed a few glasses of Pays d'Oc rose at Henri et Cie, a literal hole-in-the-wall on rue Rene Paratilla. Henri gave us a warm welcome, introduced us to his other customers (also English, one of them from Banbury) and showed us the new bike he had bought the evening before. He was an utter charmer and I would recommend a stop there to anyone. 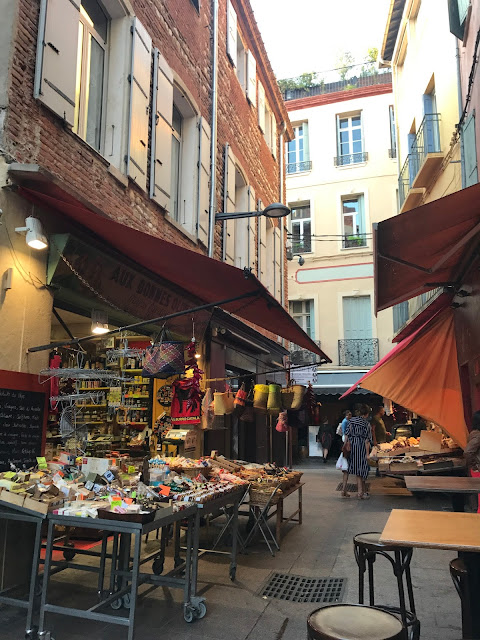 Rue Rene Paratilla - this is the view from Henri et Cie 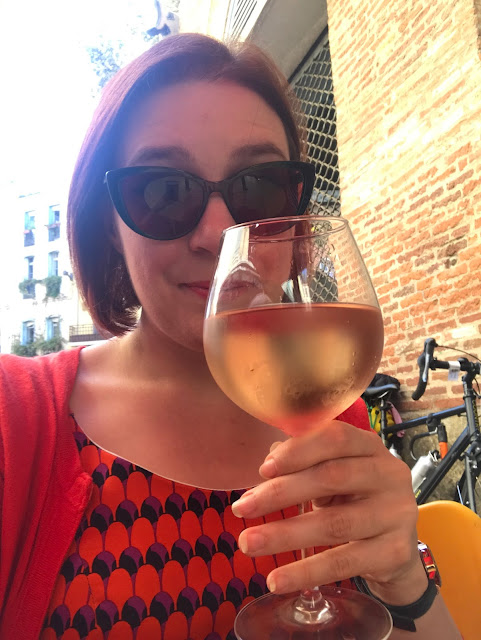 rose in the sunshine: happiness

The next morning we took the Bus a 1 euro to Collioure, a fishing village on the coast about forty minutes from Perpignan. I'm actually a little lacking in words to describe how magical the day we spent there was. The village is stunning. It is nestled between the mountains and the sea and we couldn't go more than a few hundred yards at a time without stopping to take photos of something. 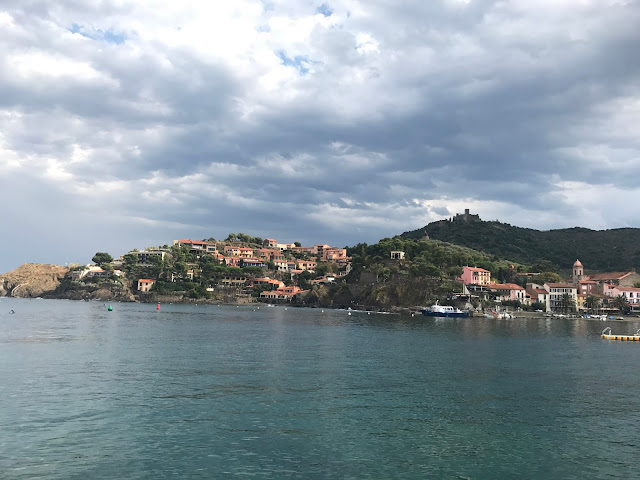 The view that greeted us when we got off the bus. 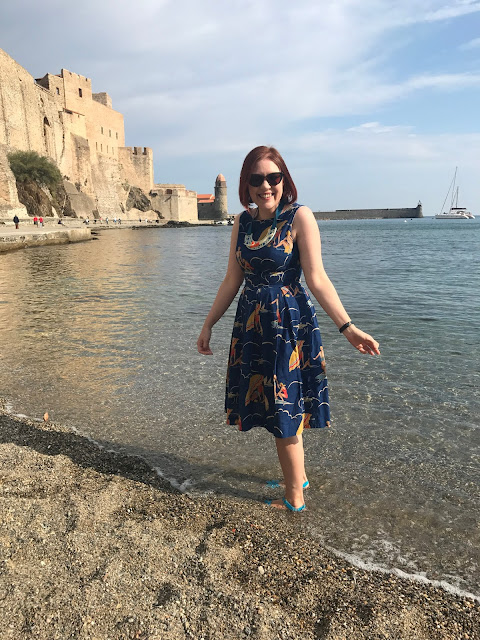 I wore my Honoria dress, Saltwater sandals and another Lou Taylor necklace. This was an extremely happy moment.


I had a paddle in the sea almost as soon as we got off the bus. Feeling the warm sun on my skin and splashing around in the beautiful blue of the Mediterranean was the best birthday gift anyone has ever given me. Nic was able to indulge some of his Cary Grant in To Catch A Thief fantasies too, so we were both very happy! He suggested that we have lunch at Le Neptune, where we sat on the terrace and enjoyed a delicious five-course meal paired with local wine. 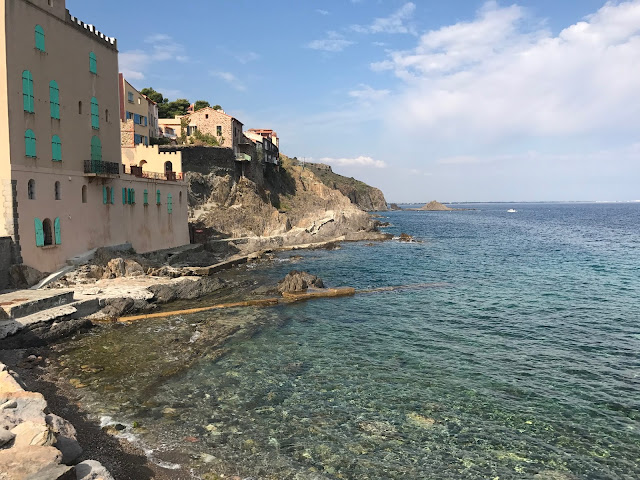 We took so many photos, I can't even. It was the most ridiculously beautiful place. 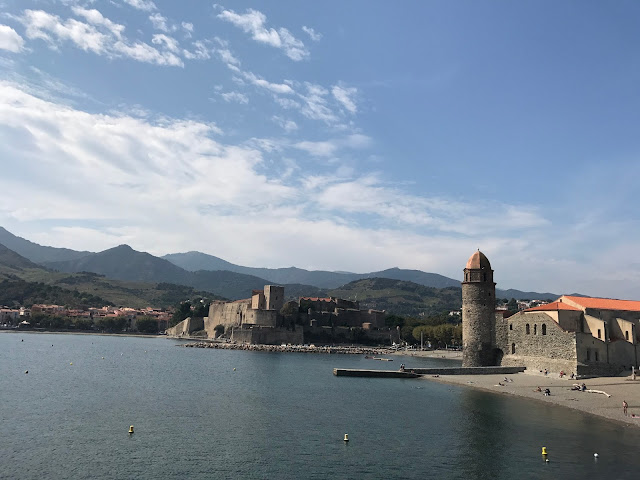 I MEAN. This clock tower is apparently one of the most painted locations in France. It's easy to see why. Collioure was the birthplace of Fauvism. You can imagine Matisse running about the place. 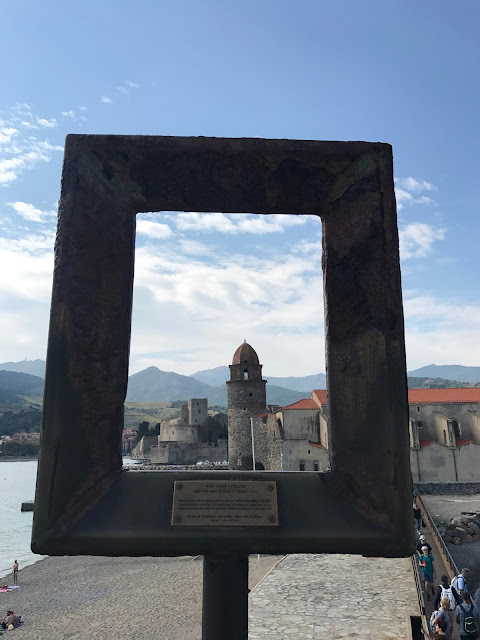 As we sat on another terrace overlooking the beach a little later, a rainstorm blew in and we ended up getting completely soaked making our way back to the bus stop. Even the rain had its charm, though, giving us a beautiful double rainbow to admire as we waited for the bus back to Perpignan. I would go back to Collioure in a heartbeat. It was wonderful. 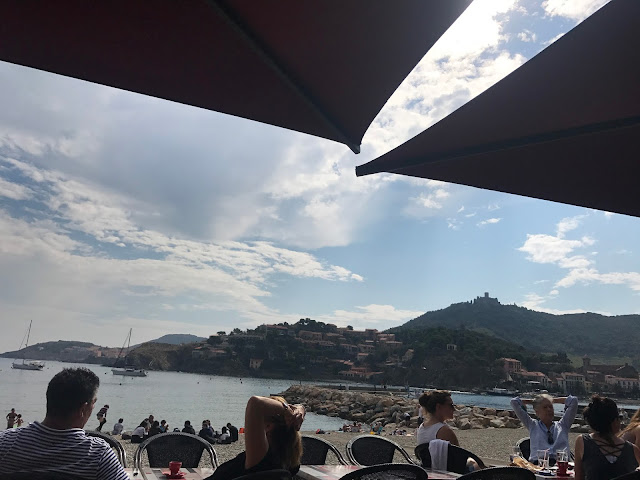 Would it surprise you to learn that more rose was consumed here?!

It was a perfect holiday and I came back feeling utterly refreshed. 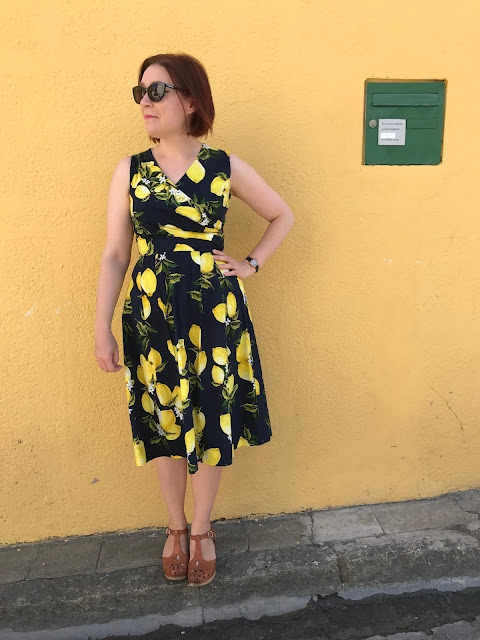 Getting the most out of my summer wardrobe...

I had done a little bit of sewing before we went, making a Butterick B6453 from some Nanette Lepore sateen that I bought from Metro Textiles when we were in New York last year. I shortened the bodice by about an inch and sewed fixed straps rather than adjustable ones. I wanted to be able to widen the straps enough to be able to wear a normal bra because I hate strapless ones! I lined the bodice rather than use facings, and I used a concealed zip rather than a lapped one, as this is my preference. 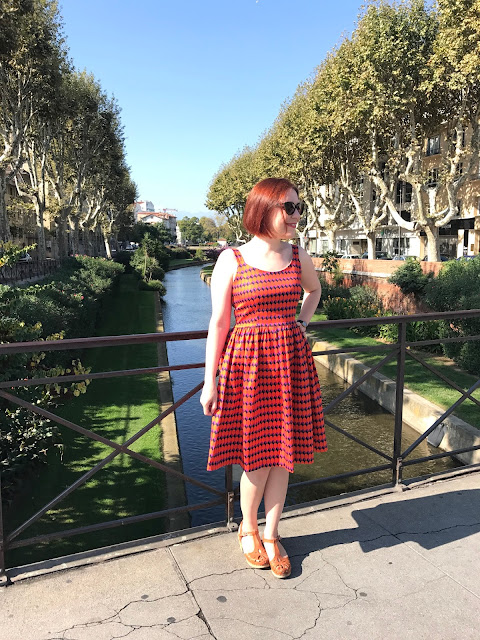 No No, Nanette dress - Butterick B6453 in cotton sateen, worn with Swedish Hasbeens Lacy sandals.

I'm not wild about the finished dress, although I did enjoy wearing it. I need to tinker with the fit a little more (I should shorten the bodice a tiny bit more, I think) but the pattern has a lot of potential. I can see why it has been so popular! I have some amazing Michael Miller fabric on its way to me from the states for spring sewing, and this could be just the pattern.

I also bought some clothes in France - two knit Breton dresses from Monoprix. I'm not sure what came over me! They're both very different from my usual style. 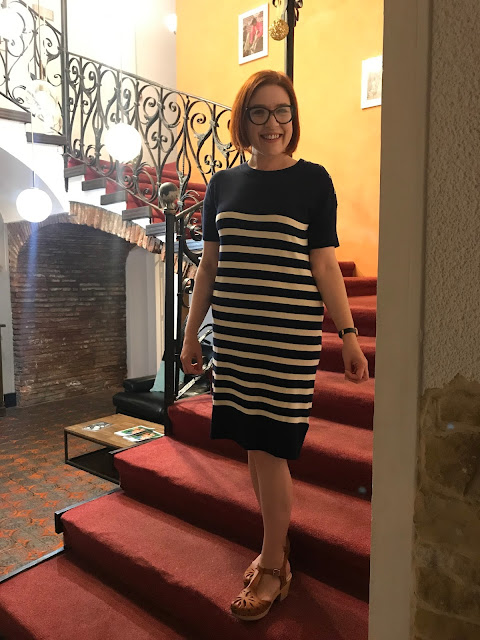 I wore one of them out to dinner on the night of my birthday and felt pretty cute in it. Nic loved it! I've worn it and the other a few times since I got home. I am unlikely to start sewing knit dresses (although I have been looking at Tilly's Coco pattern with new eyes, not going to lie). I know there is a lot of talk in sewing blogging about 'secret pyjamas' but the appeal is slightly lost on me - I want my clothes to be comfortable (and they are!) but I don't need them to feel like pyjamas. In fact, wearing the ponte dress felt a little indecent... I felt exposed and underdressed. Still, it's nice to experiment and I do like the stripes. 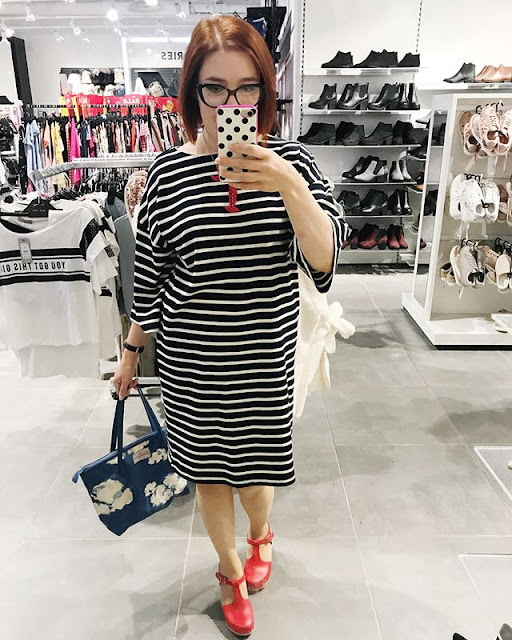 This is the other one. I do like this one a little bit better, I think.

Maybe I am having a midlife crisis. Nic and I took up running last month because I decided I wanted to build more regular exercise into my routine as a way of managing anxiety. We started doing Couch to 5k, which I was finding really enjoyable but slow going. Whilst I am very active, I have never been a runner, so building up my stamina will take a while.

Unfortunately, I injured myself last week and have had to take a break - I hurt my Achilles' tendon so have had to stop running while it heals. I've spent a lot of the past week with my ankle elevated, which has been sort of a bummer. I'm going to go for gait analysis when I've healed as I am keen to get back out there in properly fitted shoes. Against all of my previous expectations, I enjoyed the running even when I was finding it difficult. I was very disappointed to have to take a break from it, but I am pleased to find that I'm disappointed - it means I know that I was enjoying it! In the couple of weeks I had completed before hurting myself, I felt a really positive impact on my mental health.

Well, that has been more of a life update than a sewing one, AND you had to look at my holiday photos. Soz. I will have some sewing for you soon, though! Until then, au revoir mes amies!
Posted by Roisin Muldoon