It's Ireland's largest lingerie section, I understand. I read that... somewhere.

Hello boys and girls! Again, it has been a while, but that's just the craic there. Life has been busy recently, as it often is - but here are some highlights since I wrote last time: 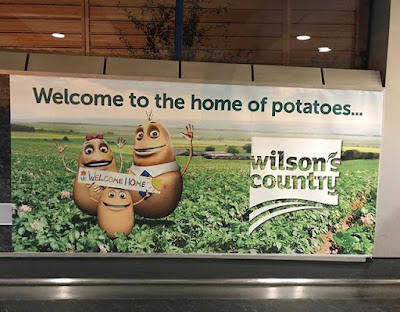 Belfast International Airport sees your concerns about stereotyping and waves some anthropomorphised potatoes in your face.

Nic and I had a few days in Northern Ireland last month, which was lovely. It was a fairly last-minute decision to go home, and it was a lot of fun. We caught up with all the nephews, spent time hanging out with my parents and even managed to fit in meeting up with my best friend and her new baby. It was a lot to pack in to four days. 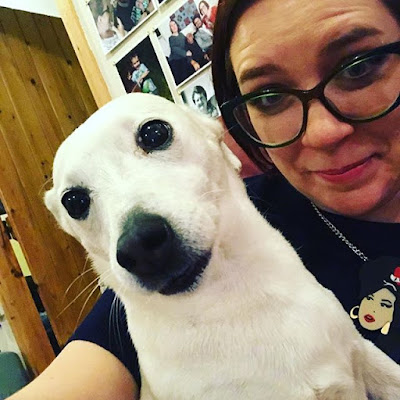 I'm still getting Mini hairs out of my clothes. It's totally worth it for the cuddles, though!

My ankle was still pretty bad when we went home, although over the course of the weekend the limping eased off. I haven't managed to get back into the running as it's still not quite right, but I am going to go for gait analysis as soon as possible to see if I need new running shoes. Now that the weather has turned properly cold, I'm looking forward to getting back into running - the one thing I disliked about it before was running when it was clammy and warm.

Thankfully the positive impact it had on my mental health seems to have persisted and the feelings of hopelessness that plagued me over the summer haven't returned. I've made efforts to look after myself and one of them has been to disconnect myself from the internet after about 8:30 most evenings. I've been suffering from intermittent insomnia for most of the year and I thought that having a complete digital detox a few hours before bed would be good for me. It has been, especially as the news has been so bleak. I found myself very affected by the Harvey Weinstein and Kevin Spacey stories, so not giving them space in my head before trying to sleep has been a good thing.

I haven't had tons of time for sewing recently, but that's okay. I don't exactly have a shortage of clothes. My most recent make was a Deer and Doe Bleuet dress which... well, let's just call it a wearable toile: 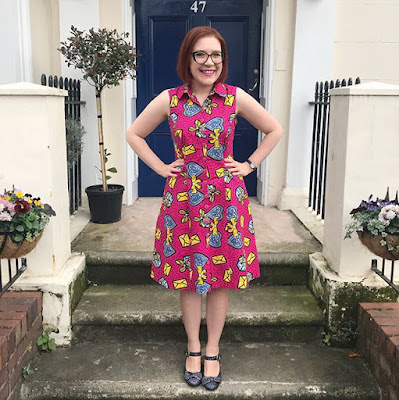 I over-estimated what size I would need for this dress and ended up cutting it a size too large. It is princess-seamed front and back, so in theory easy enough to adjust, but it still ended up being a bit too big overall. This photo isn't too bad but in real life it sort of makes me look like I'm wearing some sort of old lady housecoat. It sort of makes me feel like a jazzy Mrs Doyle.

Maybe I'll make another one. I need to try a smaller size and to move the waist up a little. It'll probably wait until spring now, though. Ah well. Luckily I still have loads of that amazing fabric left so I can make myself something a bit more successful.

A more successful recent project was another Emery dress. Last autumn I made a few Emery dresses from barkcloth and I ended up wearing them all throughout the winter because they are so warm and cosy and cute. I had been lurking the Outback Wife barkcloth collection during the summer but was hesitant to buy it - most places that stocked it in the UK were selling it for like, £28 a metre, which just seemed a bit steep to me. However, Maud's Fabric Finds were doing a clearance sale last month and I managed to pick up two metres of Outback Wife barkcloth for £14 a metre. BA BOOM. 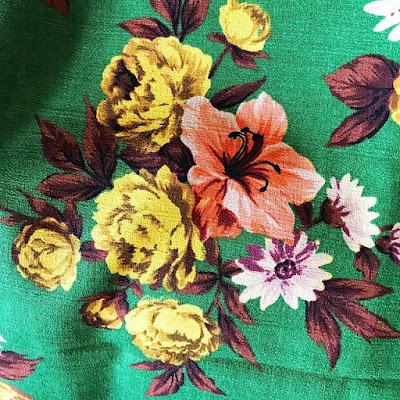 I bought two metres of the 'Elaine' print in green. I had thought I wanted the blue, but when the green arrived I loved the colour so much that I was delighted not to have got the blue instead. The fabric really is beautiful quality - it's soft and with some drape, and it doesn't have an especially loose weave either. As I bought it with an Emery dress in mind, I had no hesitation in cutting into it once I had washed and ironed the fabric. 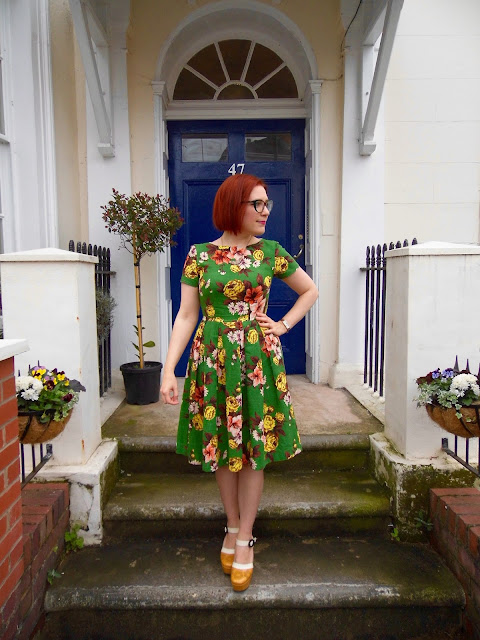 Although I think the fabric would take to gathering pretty easily - lots of Gertrude Made's dresses on her instagram have gathered skirts - I thought it would feel a little bulky at my waist, so I box pleated the skirt instead. I love a box-pleated skirt and I am frequently asked to do a tutorial on how to pleat a skirt. Lads, that isn't going to happen. It's literally folding the fabric to fit whatever width you need. EVEN I CAN DO IT, that's how remedial it is. But anyway there are plenty of other sewing bloggers to tell you how you should be sewing. I am not one of them. 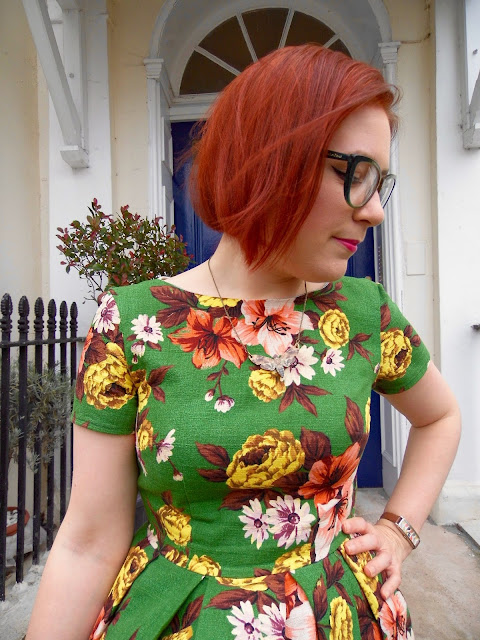 I really enjoyed sewing this dress. Due to time constraints, I had to spread the sewing out over a couple of days and it was really enjoyable. That's one of the joys of a pattern you know and love, of course. It will be a great dress to wear as the weather grows colder, and it will look great with a variety of boots. In an effort to not hate the cold weather so much, I have added to my collection of boots quite considerably. It's not at clog levels...yet: 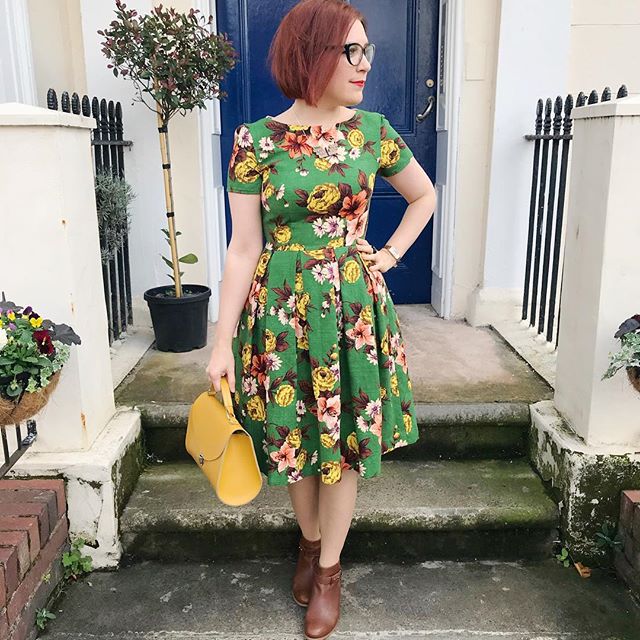 The dress had its first outing when we went to Birmingham to celebrate Canadian Thanksgiving with some friends. I wore it with these White Stuff 'Paula' boots, which I like so much that I ended up buying them in navy as well. Hurrah!

And speaking of trying to come to terms with the advance of winter by shopping... I have a new coat and I loooooove it: 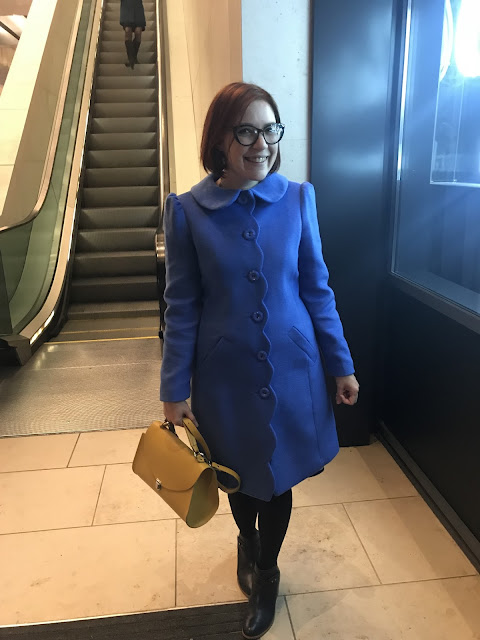 THOSE SCALLOPS THOUGH. Unfortunately, due to to fact that it was dark when the photo was taken you can't see what a lovely shade of blue it is. It's from the Savida range at Dunnes, and it's also available in pink. That's not an affiliate link or anything, I just wanted to share the coat joy. Obviously the pink one is on its way to me. I'm mainly surprised to have found something I wanted to buy in Dunnes, which is the number one place to go in Ireland if you want to buy gigantic granny knickers.

ACTUALLY LITERALLY FILMED IN DUNNES (in Ennis) I wouldn't lie to you about giant pants!

So that's the craic with me anyway. I'll try not to leave it so long next time, but now I need to try to find my way out of this feckin department store. Bye!