Months of delicate hard work and now look at it, you ham-fisted bun vendor!

Hi guys! So I guess that blogging once every couple of weeks is about my level at the moment, so that's the craic there.

It's been a long and pretty tough couple of weeks, though. Work is intense, I've had another few weeks of insomnia (which is caused by and also the cause of anxiety, so that's fun) and my grandfather died. It has not been my best time, but I've been doing my best. Sometimes that's all you can really expect from yourself. It was my paternal grandfather who died and we don't have a relationship with most of that side of the family, so I wasn't losing a dearly loved grandparent. But of course that doesn't make it any easier and it has affected me in ways I wasn't expecting, I think partly because he was my last grandparent. Anyway, I'm fine - I'm getting there - but it hasn't been my most fun time.

Life has been busy and sewing has taken a bit of a back seat as a result, but I did find some time last weekend to sew. I made a Butterick B6453 dress at the end of the summer and it was fine. I made it from stretch sateen and I wanted to have another go at it to see how it would fit in a woven without any stretch content, as the pattern is a contender for a couple of dresses I want to make in the spring. I had some fun fabric in my stash that I wasn't particularly attached to, so off I went.

The fabric in question is some Doctor Who-themed fabric that I bought a few months ago in Fancy Silk Store. The print is called 'Exploding TARDIS', although mine has a misprint on the selvedge to 'Esploding TARDIS' that makes me wonder if it's a knock-off. Either way, it's a decent enough quilting-cotton type fabric, and I think I paid £8 per metre for it: 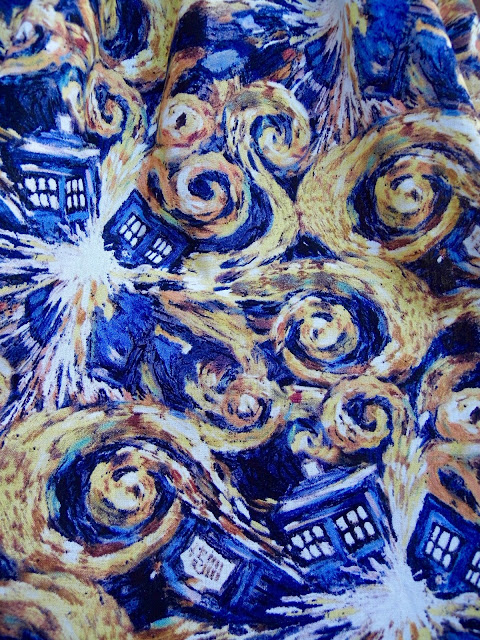 The design comes from a Matt Smith Doctor Who story called The Pandorica Opens and, in the episode, it's been painted by Vincent van Gogh, who the Doctor first met in Vincent and The Doctor. I loved that episode, despite the fact that I'm not a fan of new Doctor Who - I love Matt Smith as the Doctor, but I just don't enjoy much about the new Doctor Who episodes.

I had cut out B6453 out in a size 10 and shortened the bodice by about an inch. I thought there was a chance I needed to go down a size but I cracked on with the 10 anyway. Error. I realised that I needed to size down and shorten the bodice by another half an inch or so. After I had constructed the dress, I removed the skirt and cut a little bit of length off the bodice and took it in by about an inch at the sides. It's not perfect now, but I'm pretty happy with how it turned out: 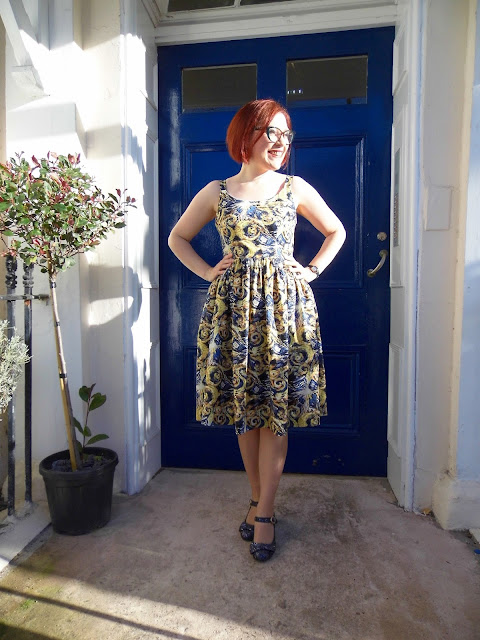 For One As Beautiful As You dress - Butterick B6453 in Exploding Tardis fabric, worn with Red or Dead Lindy Hop shoes

It was so sunny the day we took these photos - sorry they are so bleached out! Also, PLEASE DON'T ASK ME IF I WAS COLD. I was cold, but it was literally only for the minute or so it took to get the photos. You'd like to think it's obvious that I wasn't running around in a sundress in the northern hemisphere in November, but there you go.

That said, it's November, and this is a sundress. This is only wearable right now with the addition of something warm. Luckily, I have the perfect partner in the shape of a TARDIS-blue jumper I knit two years ago: 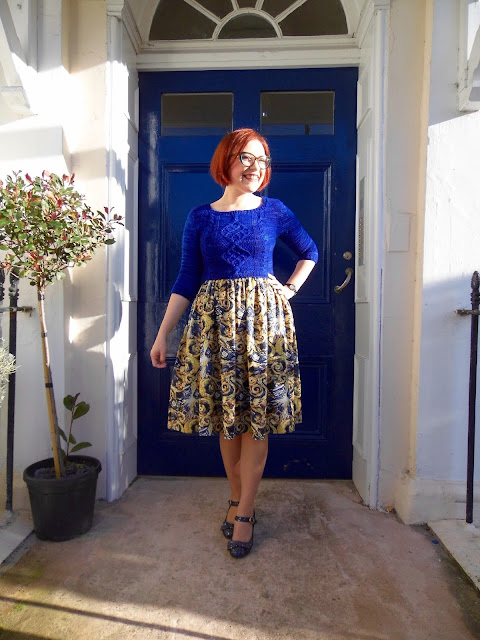 This is my You Were Wearing Your Blue Jumper jumper, and it's a Chuck sweater by Andi Satterlund. I really like how these look together, and even though it has short sleeves the jumper is lovely and warm. Happiness!

The other changes I made to this pattern were to widen the straps and fix them, and to use a concealed zip rather than a lapped one - I just like them better. 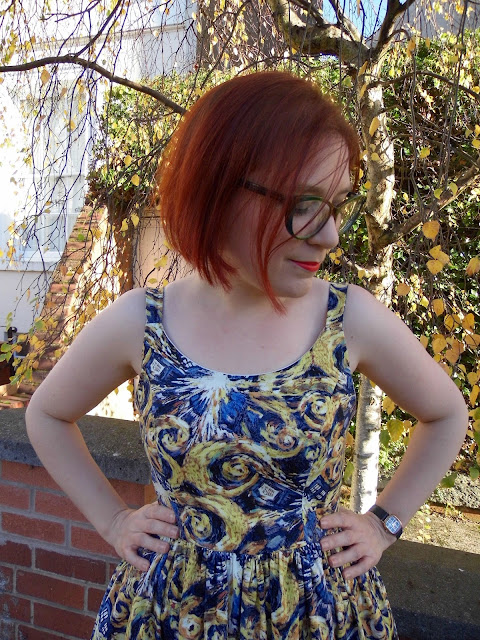 I have to shorten the straps quite a lot for them not to fall off my shoulders, but I think it still looks okay. I really like the shape of the neckline and I think if I can get the fit nailed this pattern will be right for some lovely fabrics I have lined up for the spring. I know it's some way off, but thinking of warmer weather is one of the things that helps me through the cold winter months.

I bought some yellow clog ankle boots and they arrived the day I wore this dress, so when I went out to the pub that afternoon to meet my lovely friend, I put them straight on: 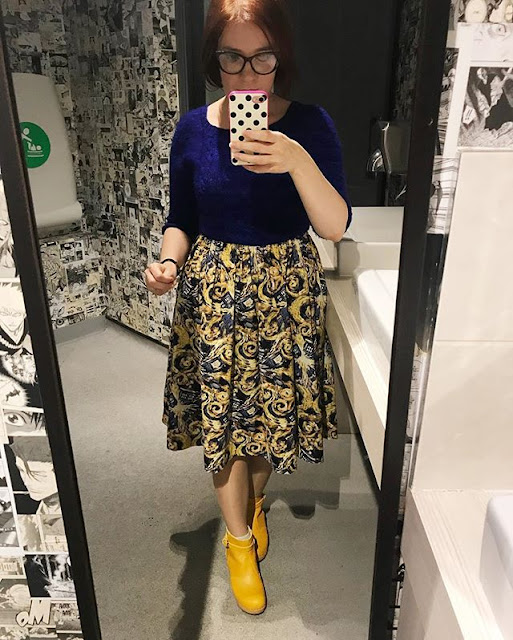 TOILET SELFIE. But in fairness, this is an excellent selfie mirror.

The boots - which are Swedish Hasbeens 'Jodhpur' boots - are arguably on that line where ugly meets awesome, but that is something I do like. I think they look pretty great with this dress, anyway!

I wore this dress on Friday to belatedly honour the anniversary of Doctor Who, which was first broadcast on 23rd November 1963. You should check out a few other awesome Doctor Who-themed dresses that have popped up recently - Lynne made an excellent Anna dress from this same fabric a few weeks ago, Annie blogged another wonderful TARDIS dress earlier this week, and let's not forget the marvellous Ernie K Designs with her Dalek onesie and Dalek dress. Having said that I'm not a fan of new Doctor Who, it did introduce me to my favourite Dalek, Tea Tray Dalek, so it has that in its favour:

WOULD YOU CARE FOR SOME TEA

This Dalek is so British he is carrying tea whilst wearing a Union Jack. Aggressive colonialism and tea-drinking: there's really not too much to separate the Daleks and the Brits when you think about it.

Anyway, that's the craic with me. But if you're wondering, if I had to choose who my favourite Doctor was, it'd be Jon Pertwee.

He's arguably the most mansplainy of the Doctors. I mean... Jo takes it in good part, but still. Sarah-Jane finds him so mansplainy that Tom Baker seems like an improvement. BUT, nobody else has as good a face or has as much fun with the monsters: 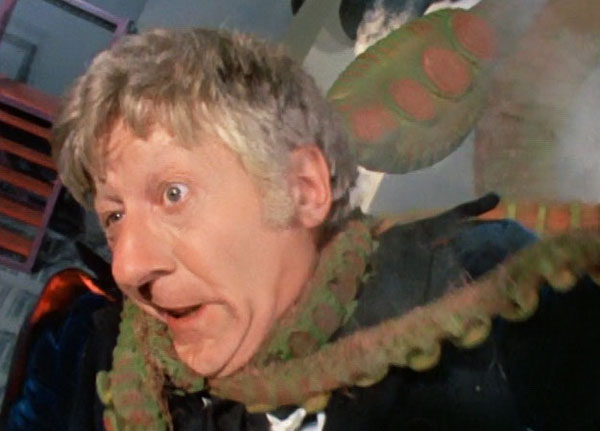 The dude loves to dress up. His clothes are fancy as fuck (actual CAPES) but I'm referring to his penchant for disguises, which are accompanied by voices: 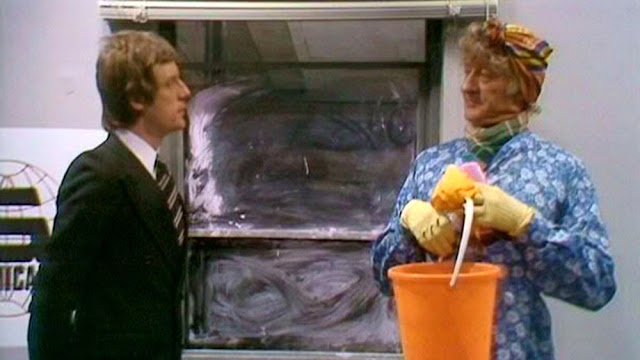 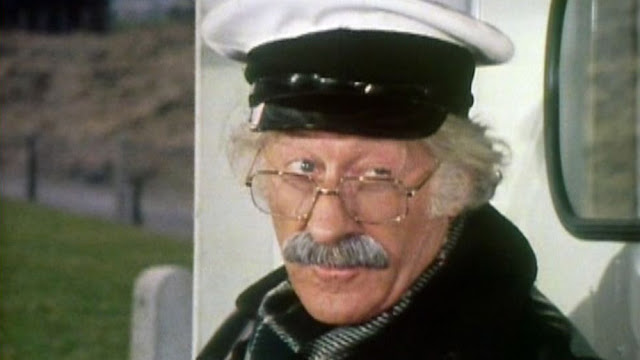 So, yeah. Third Doctor all the way.

So anyway my dinner is nearly ready so I'm off here for my own adventure in time (dinner time) and space. See you soon, friends!