Ah hello, it's yourselves.

Yes, it has been a while... I just can't seem to get back into the swing of regular blogging at all, but life has really managed to get in the way. The last time I was seen around these parts was November and I was full of good intentions to blog more often but it didn't happen for a variety of reasons. So this evening I am going to give you a wee life update and also show you a few things I've made recently.

We've been having a fairly tough time since I last wrote: in early December, Nic's dad got a virus and was admitted to hospital and, late on a Sunday evening at the start of the month we got a call to say we should go to be by his bedside as he was unlikely to live through the night. It was, as I'm sure you can imagine, very awful. Nic's parents live 175 miles away in Kent, so we made a long, late-night train journey to get to the hospital in Ashford. It was looking very bleak but somehow he pulled through, although he declined again in the week before Christmas and we found ourselves again awaiting a bad-news phone call. He rallied again, despite having contracted pneumonia whilst in hospital and he has since been discharged. He's in a nursing home and this is the new normal - he requires around-the-clock care and it's the best place for him, but of course it is very stressful for him.

It's been as hard and sad as you can imagine, made even more difficult by the fact that we are very far away. I know that it's something that comes to everyone, but it felt especially unfair to watch Nic go through it - we are still too young to have to face losing parents, and the grief and loss of the last few years has just felt so relentless. It's an irrational way to look at it - I know things don't work that way - but it has been very hard. Nic has been very strong in the face of an incredibly difficult situation. Our friends looked after us and we looked after each other, but December was pretty fucking shitty and we're only really starting to recover from it now.

Despite everything, we tried to make the best of our break at Christmas. I finished work for the year on 16th December and we made sure to spend as much time as we could with the people we love. I did some sewing and some knitting, we watched lots of films, we had days out and a few days in Liverpool to stay in our favourite hotel and just chill out.

So that's the life update. Now for some making! Here is a dress I made aaaaaaaages ago... at the start of September, maybe? It took me ages to get around to getting photos of it as well. 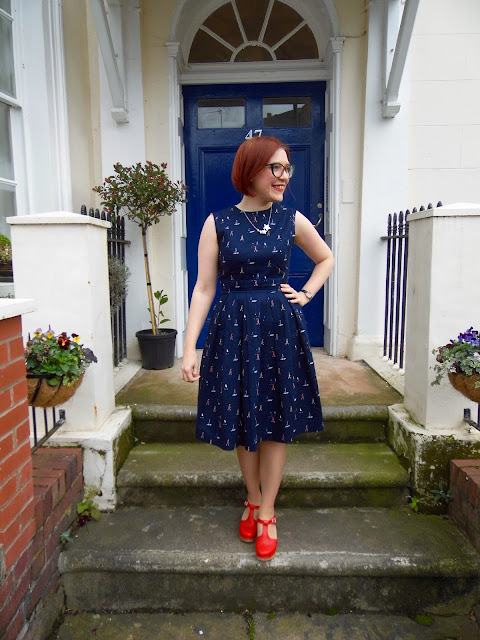 I bought the fabric for this dress when Nic and I visited Liverpool in August. I wasn't desperate to fabric shop, but I thought it was worth having a look in Abakhan, and that's where I bought the fabric. It came from the 'fabric by the weight' bin and I'm not sure how much I got but it cost £8. I spotted it, wandered around a bit indecisively, decided to leave, changed my mind... then Nic picked it up and said he had spotted it and thought I should buy it. He knows what I like! I will say that what I do not like is shopping in Abakhan... it was so hot and stuffy and chaotic. I don't doubt that it has great stuff in it, but shopping in there made me feel a bit sick and I was very glad to leave.

The fabric is pretty cool, though: It really doesn't photograph well, but the print is random people...some of them crossing pedestrian crossings, some of them wearing what seem to be tracksuits? Someone said to me on instagram that they thought it was Paul Smith seconds and I can believe it, because there were lots of imperfections in the print. That said, it is such lovely quality - it's a very smooth medium weight cotton, it presses beautifully and it is so comfortable to wear. The zebra crossing in the print combined with the fact that I bought it in Liverpool made me think of The Beatles, hence the name. Eleanor Rigby is my favourite Beatles song. 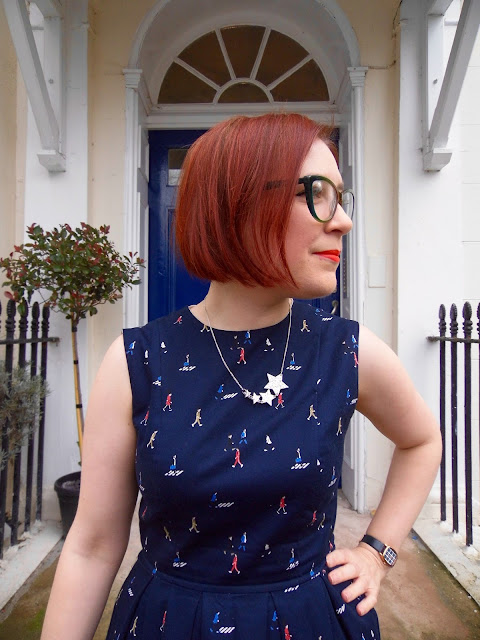 I used Vogue V9075 for the bodice - I really like the high, round neck and I also love the princess seams that extend the whole way up to the shoulder seam. It's been so long since I sewed this that I can't remember what adjustments I made but I'm pretty sure I had to shorten the bodice and angle the zip in a bit at the top as the back neckline came up very high. I think I will have to toile it if I make it again, as I think a swayback adjustment is probably called for along with the shortening the bodice that I did.

I added a pleated skirt to this dress rather than the gathered skirt called for in the pattern because I didn't know how well this fabric would take to gathering, but a part of me is definitely tempted by the jumpsuit option. I mean... it's unlikely, but if I found just the right fabric, it could definitely be pretty cute! I've definitely seen some beautiful versions on sewing blogs... although, all sewn by tall beautiful stylish types... it would look quite different on me! 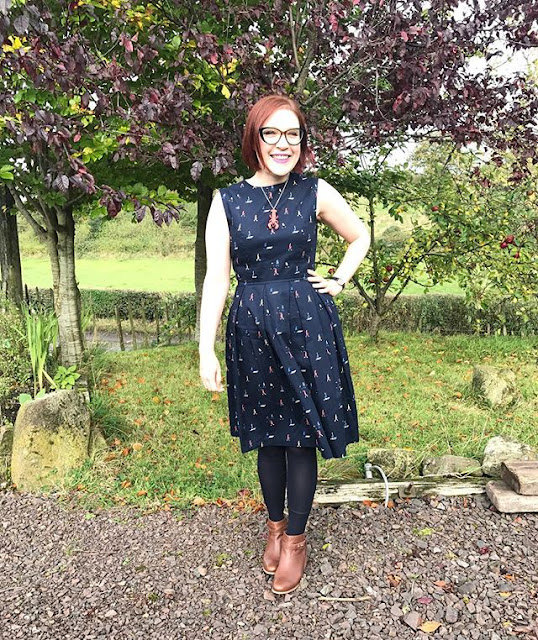 Wearing it with tights, boots and a busted ankle in Northern Ireland in October.

I was quite on the fence about the dress when I made it because it is very... demure? The neckline is very high, even for me! But it's really grown on me. I think it's in large part because the fabric is just SO NICE. It feels amazing to wear, and that makes a big difference. It is a little demure but the high neckline works really well with statement necklaces, and that's my jam. I like wearing navy in the autumn and winter as well, because it works well with opaque tights (even though navy tights do remind me of school) but it is so much less harsh to wear than black. Against the odds, this dress turned out to be a winner. I would consider visiting Abakhan again on a future trip to Liverpool.

Now, having bummed you all out with sad news at the top of the post and showed you something I made months ago, I'm going to try to make this post both more cheerful and more current and show you the thing I made most recently... a jumper! This yellow Andi Satterlund Chuck sweater is my first completed project of 2018 and I am pretty happy with it: 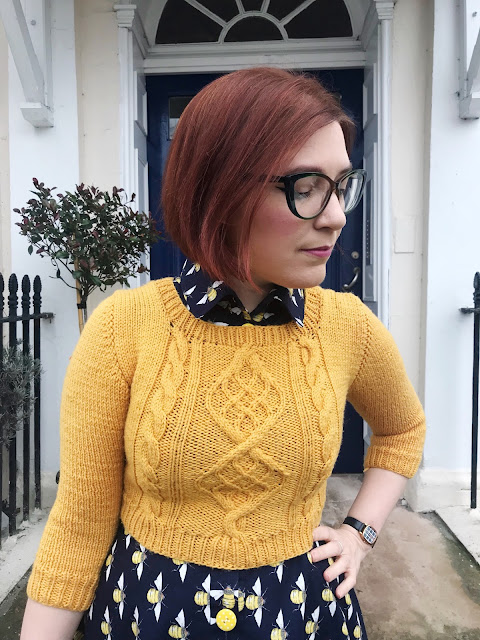 The yellow yarn is Cascade 200 superwash. After finding it very itchy in other projects, I tried washing my garments made from it with shampoo and conditioner before washing them in the washing machine on a wool setting. It totally tamed the itchiness, which made me want to knit with it again and I made this jumper. I cast it on during the Christmas holidays and finished it last week. I knit size small, but used the waist shaping for extra small. I wanted to make the neckline a little rounder than in my previous versions of the pattern, so I picked up 2/3 stitches for the ribbing rather than 1/1 and I'm really happy with it.

Bizarrely enough, a bright yellow jumper works well with a lot of my wardrobe. 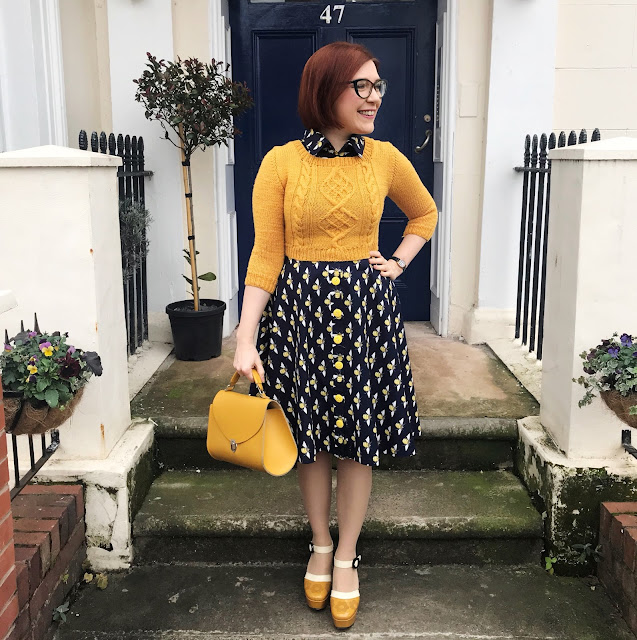 Yellow Chuck sweater worn with How Can You Leave Me On My Own dress, Orla Kiely x Clarks Marianne shoes and Cambridge Poppy bag.

Can you tell that I am very over winter and very, VERY ready for it to be spring? OH GOD WHEN WILL IT BE WARM AGAIN. I wore this outfit on Sunday and it was very worth the cold legs and feet (I was wearing tights but sheer tights like, they're not for warmth, let's be real.)

Anyway, that's all from me for this evening. Thanks for hanging in there with me, guys. 2017 really took the words from me - it was such a hard year personally and globally and I had so many thoughts and feelings that articulating them felt like an insurmountable task. I'm going to try to get some of the words out in 2018.
Posted by Roisin Muldoon