And you know, all of my clothes double as pyjamas.

It's been five months since I last blogged, which is guess is not so much a break as a sabbatical. A hiatus? Either way, it wasn't intentional, although I did end up spending some of that time wondering whether I was ready to give up blogging. I had pretty much decided that I had, but then Nic and I had a lovely two weeks on holiday and, like the best holidays do, it reminded me about how I feel about myself when I spend time doing things I enjoy, which made me want to get back to writing. Here I am!

The fact is, the world is very crazy at the moment. It is so crazy and overwhelming that it has been almost impossible for me to find the words for any of it. It's been hard because I have so many FEELINGS and there are so many things to have feelings about - where does writing about sewing and shoes and TV fit into that?

So that's the craic there anyway.

Nic and I have just come back from a very lovely ten days in Paris. We stayed in the same apartment we stayed in last year, a beautiful place in a Haussmann building in Batignolles/Monceau. This was our seventh visit to Paris in the last ten years, so we went with no plans except to flâneur about the place and enjoy ourselves, which is exactly what we did. We did lots of fun things, including some of the touristy things we hadn't done yet. We walked across the Pont de Bir Hakeim and I got a good blogger photo with the Eiffel Tower: 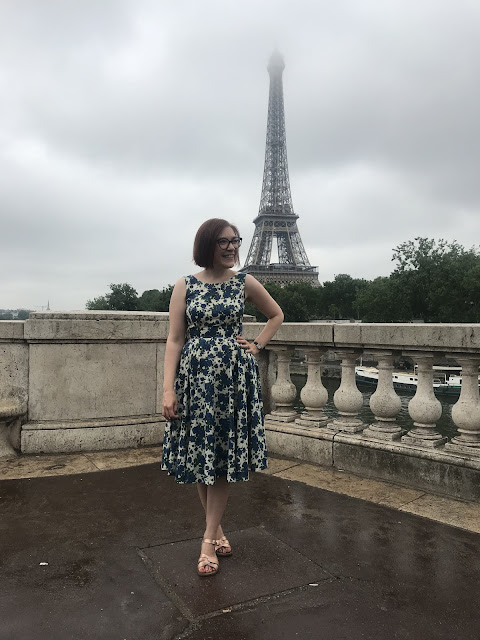 It was a bit damp and misty that morning - our first in Paris - and I liked how moody it made the Eiffel Tower look!

We went to the top of the Tour Montparnasse. This is something I have wanted to do for years, but it has always been too hot. I'm so glad that we finally did! The tour is impressively ugly up close - like, you think it looks bad from a distance, but it is something else up close: 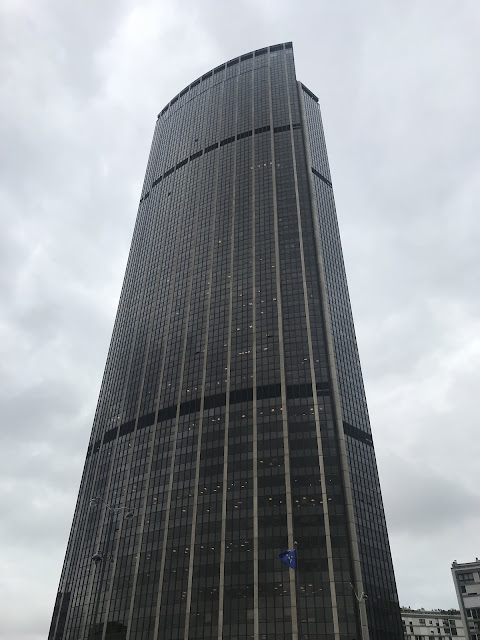 I mean, it looks so crap, but I am a little bit sad that they have plans to beautify it because I love ugly things. Your ticket gets you access to the viewing lobby on the second-to-last floor, which is sort of endearingly crap, as well as to the actual roof, which is fantastic. There is nothing on the roof itself apart from a champagne bar and some weird plastic chairs, but of course the view is so good you don't need any distraction. Because Paris is quite low-rise, there isn't the same wow factor that you get from the the Top of the Rock (or any of the other tall buildings there - that's the only one I have been to the top of) but I loved seeing my favourite city spread out below me WITH CHAMPAGNE. 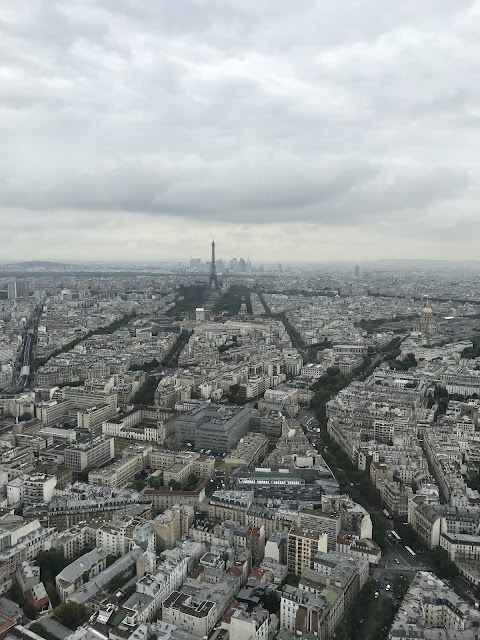 It made me feel very happy and quite emotional, not least because it called to mind the wonderful short film by Alexander Payne from Paris Je T'Aime called 14e Arrondissement, in which Margo Martindale's character, Carol, visits the tower.

We also finally took a trip on a bateau-mouche. I'm not sure why it took us so long to do this because we both love going on boats, but anyway, I'm so glad we did! It was a very hot day and of course people are the absolute fucking worst, but it was a lot of fun to see Paris from the water. I also found the audio guide kind of hilarious. 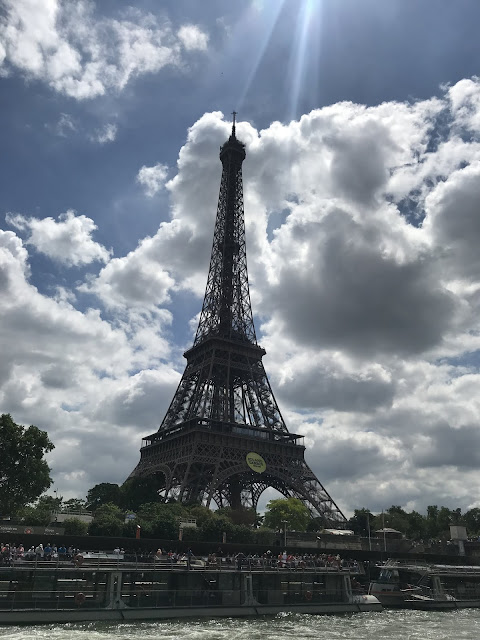 The Eiffel Tower, seen from the water. This was on the journey back, shortly before the cruise finished, and people lost their fucking minds when we went past this. I'm not exaggerating - it was utter bedlam. It was honestly more entertaining watching that than looking at the scenery. Of course I was being a massive snob about it like the Eiffel Tower is old news or some shit.

Mostly, though, we just strolled around, explored some new areas, people-watched and dog-spotted and of course, ate bread and cheese and drank champagne. It was lovely. 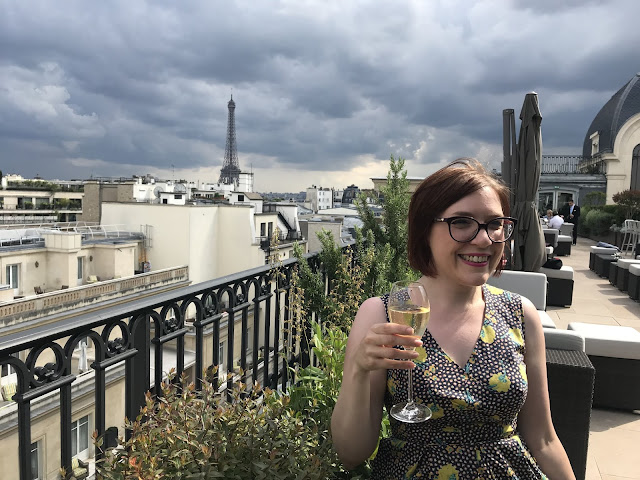 Me with a glass of Taittinger on the roof of The Peninsula on Avenue Kléber. We drank champagne on a few rooftops in Paris and this was the fanciest.

Before we went to Paris, I had decided not to spend too much time fabric shopping - I have lots of lovely fabric at home - but I did end up buying two pieces from the Marché St Pierre area: 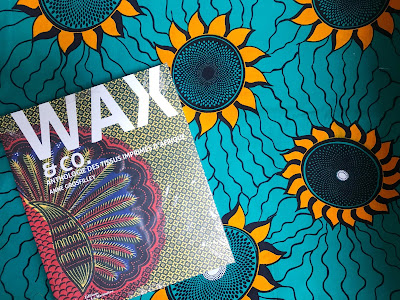 I bought a length of this wax cotton from Moline and Nic bought me this beautiful book about wax from Gibert Jeune on Blvd Barbès. 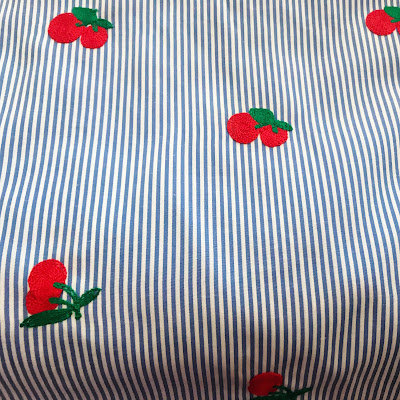 I bought this polyester shirting from Reine, and I haven't decided what to do with it yet.

We got back on Thursday night and Nic had to go to Leeds early on Friday morning for a conference, leaving me at somewhat of a loose end. As the apartment we stayed in had a washing machine, I had been able to pre-wash my fabric (also, you know, coming home from holiday with a suitcase full of clean clothes is so much better than the alternative) so I was able to get down to some sewing straightaway.

I had bought the wax cotton with a plan: I had been meaning to make another maxi-length By Hand London Anna dress for a few years - specifically one from wax cotton, because I love my Barbès-Rochechouart one so much: 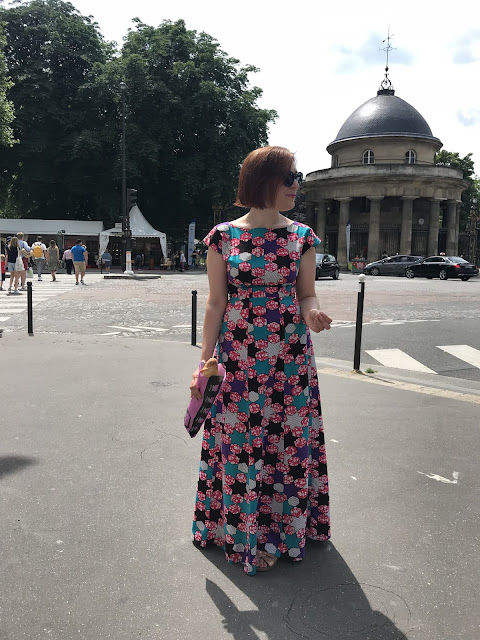 I cut it out and sewed it up over the course of Friday afternoon and Saturday morning. I was accompanied in my endeavour by The Staircase on Netflix. The Staircase is... just fine, by the way. I didn't love it. I guess watching all 13 episodes in less than 24 hours wasn't optimum. I'm glad I had sewing to bring me some resolution, though, because you sure don't get it in The Staircase (although, I mean, CLEARLY that dude killed his wife, yeah? Either that or the owls... but, I mean, come on.) Sewing the dress reminded me of why I had procrastinated over making another one for so long - wrestling that long-ass skirt around the ironing board and sewing machine isn't super fun. Also, even though I had been pretty careful about notching the skirt pieces, I still found some issues in putting them together.

The finished dress was totally worth it, though: 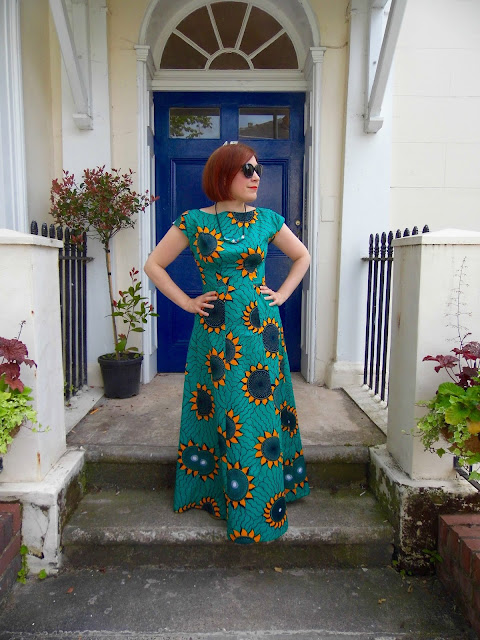 I love the finished dress a whole lot, and even though it isn't necessarily an everyday dress, I know it'll get a lot of love over the summer and over the next few years based on how much I have worn the Barbès-Rochechouart dress. Also I feel legitimately fabulous in it, which is very hard to beat. 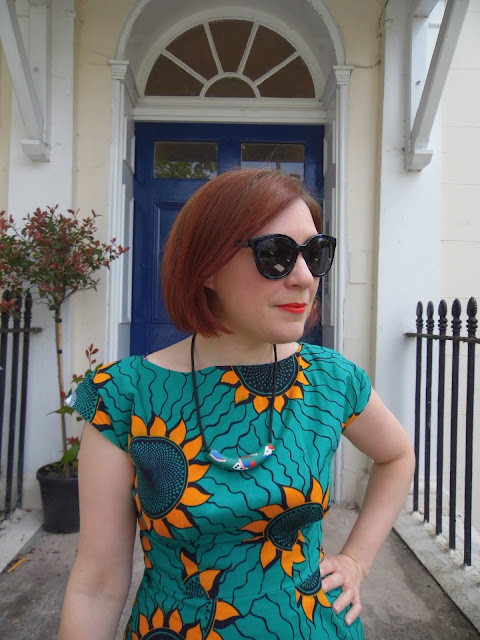 The fabric is still a little stiff but I know that it will soften up nicely after a few washes. I bought four metres of the fabric (this was on the bolt rather than in pre-cut lengths and I think I paid like, €3pm for it) and I needed to use pretty much all of it, as wax cotton is fairly narrow. I knew I wasn't going to be able to avoid sunflower boob because of the way the print is placed, but I think I did a pretty good job of the bodice placement all the same. 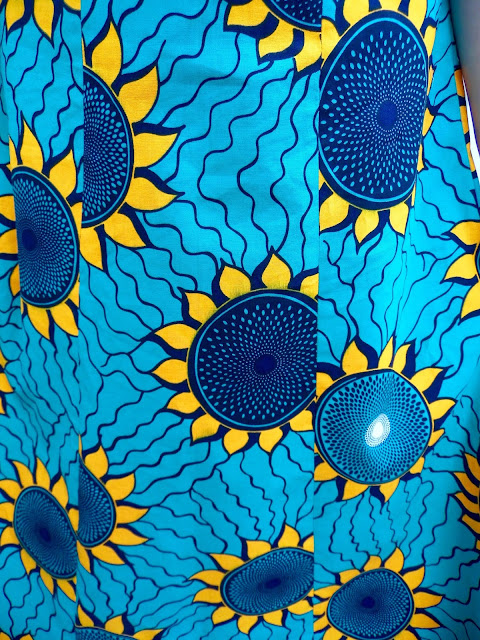 All I can hope now is that we get a summer worthy of such a fabulous maxi dress.

So I'm going to roll on now and make some dinner. See you again soon, mes amies!