Why hello there, it's yourselves! I hope you're all well. I'm currently enjoying this ridiculously sunny and warm weather - as a faintly blue-tinged Irish woman, I'm not really physically compatible with such heat (I swell up, I get heatrash, I burn REALLY easily) but as someone who has 11,000 pairs of sandals and even more sundresses, I am very happy to be seeing the sun. I have been busy trying to get back into the swing of work and I had the unmitigated joy of spending last week in delightful Slough. Did I say 'unmitigated joy'? Hmm... that's not quite what I mean.

It was a pretty trying week, to be honest. It was a week of extremely busy days in a fairly unsuitable environment with very little to do in the evenings, because Slough is generally quite shit and horrible (apologies to any readers in Slough... but, I mean, I'm not wrong.) It was better than it could have been becuase my colleagues are lovely, the much prettier town of Windsor was a short walk away and... well, the week eventually came to an end and I was able to come home. My own bed never seemed quite so sweet as it did after a week spent in a budget hotel next to Slough railway station. I was meant to be spending most of the first week of July in a similar budget hotel situation in Milton Keynes (I do not get to have fun work travel, sadly) but thankfully those plans have changed. I don't think I would have been able to cope with all of that excitement. 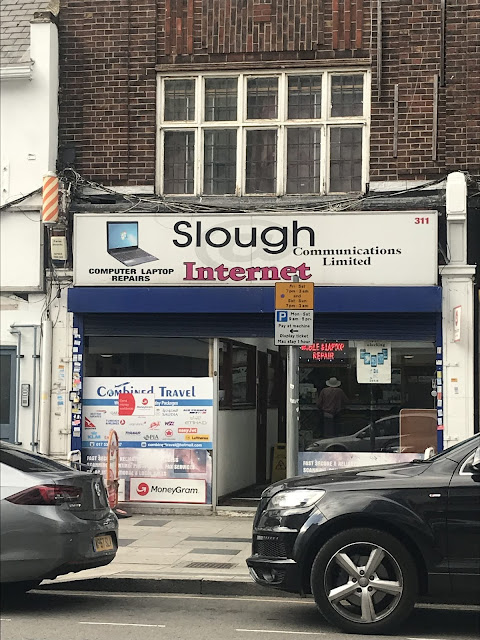 Slough internet... one of the issues during the week was how slow the internet was when we needed to get all of the work done on an online system. Communictations Limited was extremely apt.

Slough aside, life is pretty good. I've been enjoying the good weather and trying to make the most of it by having nice days out whenever possible. Over the last few months, Nic and I have been taking occasional day-trips to Oxford. It's only a 35-minute train journey from Leamington but as neither of us much like the city centre, it's not somewhere we had previously been interested in going to very often. This changed a few months back when we decided to explore the outlying suburbs and we had a lovely day in Jericho. 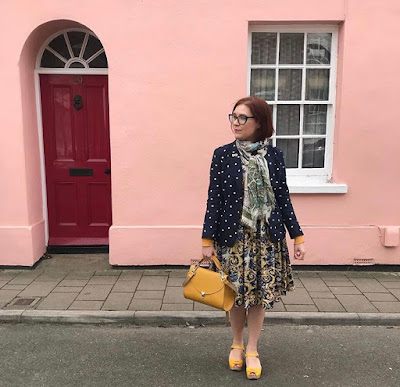 Here's me acting the fashion blogger on Observatory Street in Jericho.

On the day of the royal wedding, we had a very pleasant day pottering along the Thames path. A few weeks ago, we decided to walk along the canal to Wolvercote and find some riverside pubs - as Morse fans, we decided to aim for The Trout (which Morse visits in The Wolvercote Tongue and Second Time Around) with anything else being a bonus - we also ended up in The Perch at Binsey (which Morse and Lewis visited in The Daughters of Cain.) I decided to wear a dress that I made back in April for the occasion: 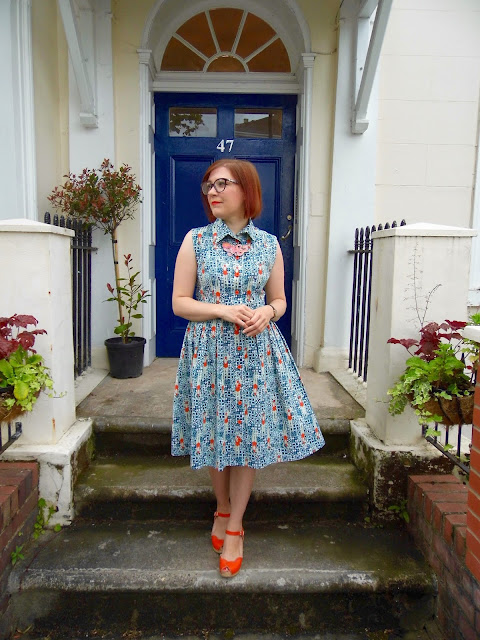 
So, the craic with this dress is THIS FABRIC. 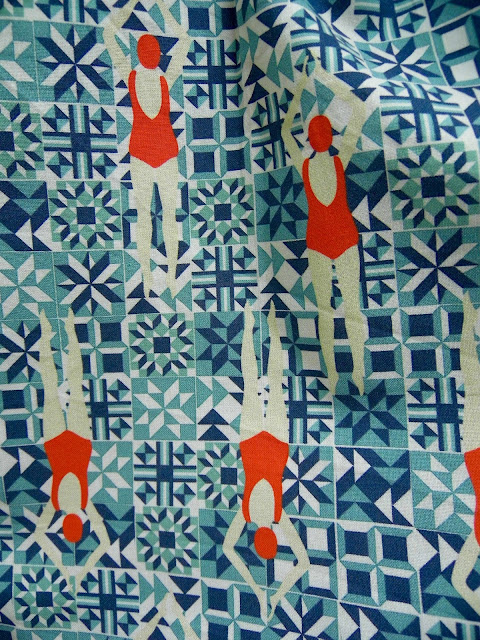 The fabric is by the amazing Lou Taylor and is based on her swimmers design from the Lido collection. I love Lou Taylor's designs and own quite a few of her pieces - the swimmer necklace this print is based on was the first one I bought. 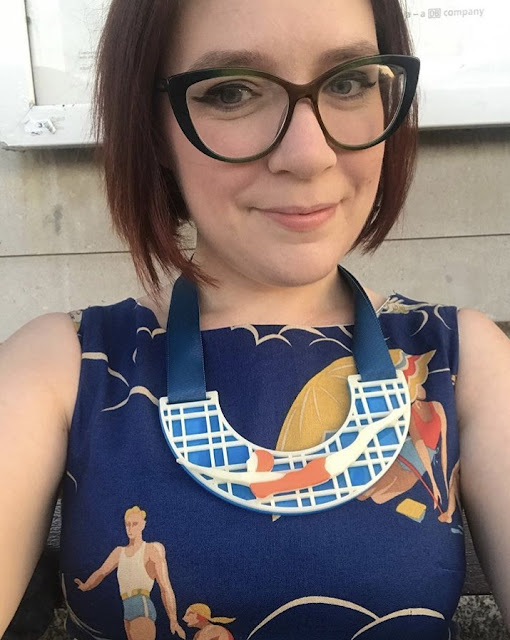 I love this swimmers necklace a whole lot. You can get it here and that's not an affiliate link.

Over the last while, Lou has been working on fabric and accessories based on her prints and she got in touch with me in March to see if I would be interested in testing out the dress-weight version of her lovely swimmers cotton. I don't mind telling you that I leaped at this - I was extremely excited by the thought of a Lou Taylor dress! I even had an inspiration dress in mind - this swimmer-print shirt-dress from Palava: 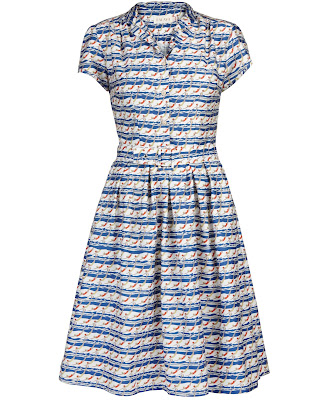 Louise swimmers dress from Palava - also not an affiliate link!


Lou sent me 3 metres of swimmers fabric, which is 150cm wide. I decided that I wanted quite a classic shirt-dress shape - something along the lines of M6696, but without a waistband as I didn't think it would work well with the print. I decided to do a mash-up of B6333 and M6696 - the bodice from B6333 with the skirt and collar from M6696. It turned out to be a match made in heaven - or at least, I think so! 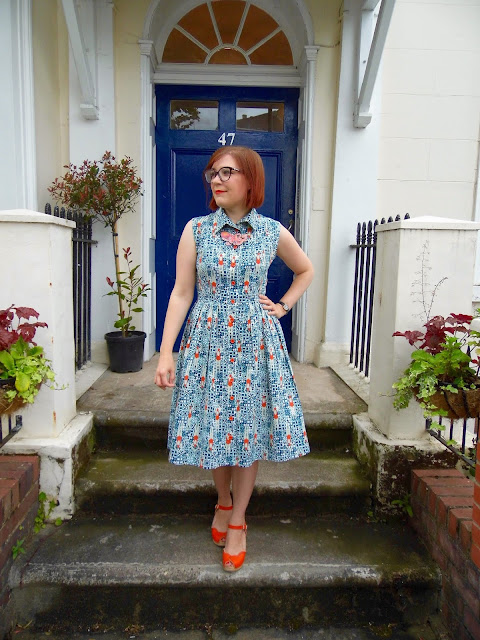 I dithered for a while over what colour buttons I should use - I thought that dark blue buttons would blend in and leave the focus on the print, but in the end I went for these cute orange buttons from the fabric shop I am lucky enough to have at the top of my street. I think they are brilliant - they stand out really nicely and give the dress an even more fun, retro feeling! 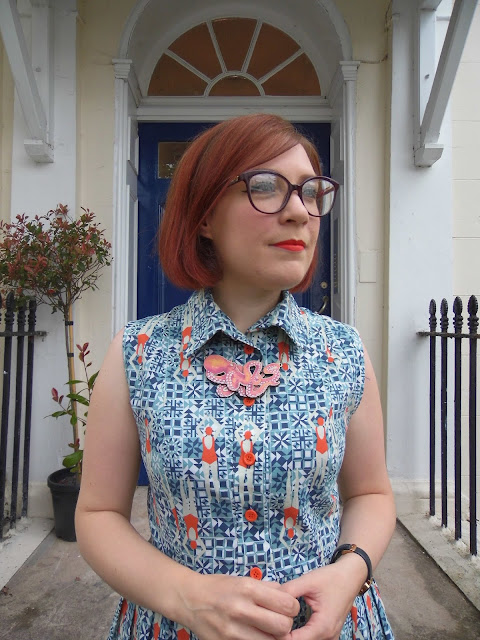 The amazing Kraken necklace is from Birch, Please.

I don't have a huge amount to say about the construction of this dress because it was very straightfoward. Blending the two patterns together was very easy as they're from the same family, so they fit together really nicely. The fabric was very well-behaved to work with - it's a medium-weight poplin with a slight texure to it (almost with a linen feel) that takes very well to pressing.

A limited amount of the fabric went on sale in April and it sold out very quickly. Real talk - it was expensive. It was (I think) £65 per metre, which made it the most expensive fabric I have ever worked with. I can't argue with the price - the fabric is very lovely quality, of course, but what you're paying for is the design, which is wonderful. Lou Taylor doesn't have fabric available to buy at the moment, but if she brought out more prints in future I would be seriously tempted - particularly if the lobster print ever became available! 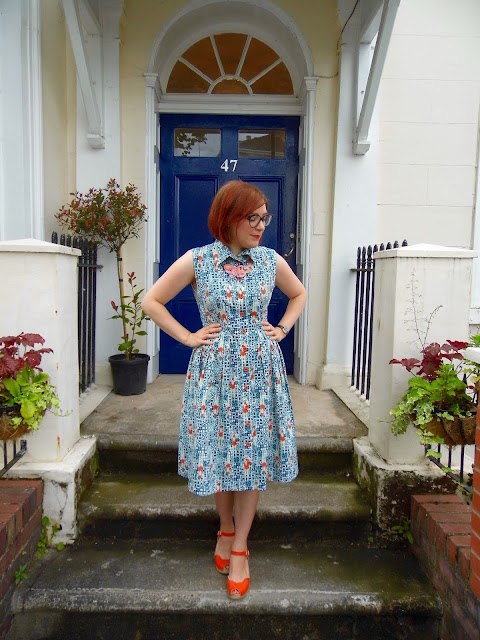 I'm currently growing the henna out of my hair, hence the weird two-tonedness of it in these photos! I had it cut last week and it's looking better... but just in case you were wondering why I was bringing the red panda realness!

After making my shirt-dress, I had about 1.2m of fabric left - which turned out to be enough to eke another dress out of! The print isn't directional and the fabric is lovely and wide, so I was able to make an Emery dress with a pleated skirt from it. I'm not sorry to have this amazing print in my wardrobe more than once. 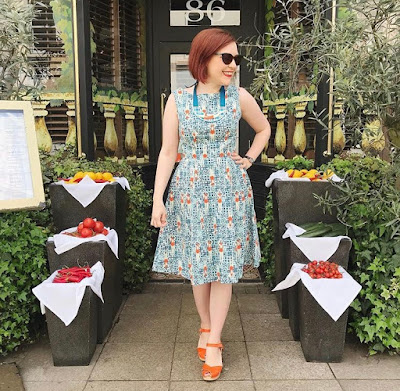 Obviously I have been wearing the dresses with my swimmers necklace - you might be able to see it in the photo above - I mean, obviously it's too much, but it's not like that has ever stopped me in the past. A few weeks ago I ordered another Lou Taylor necklace to wear with them - this crab necklace. I am super excited for it to arrive!

So anyway, back to our day out in Oxford. We had a lovely time. I drank champagne and chatted with the ducks at The Trout, had lemonade in the sunshine at The Perch and ate a masala dosa near the railway station before getting the train home. 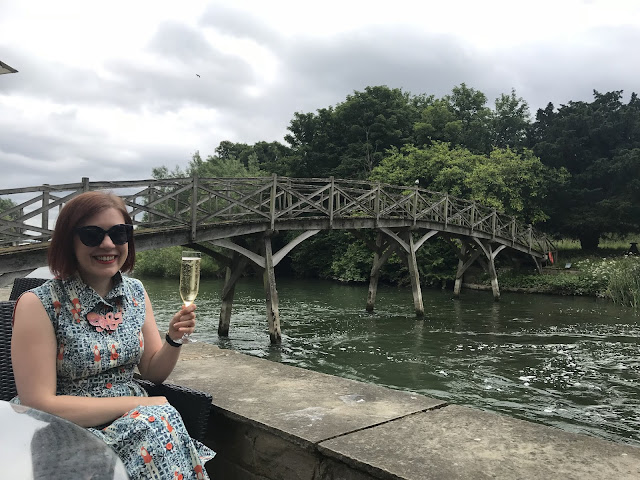 Loving life, trying to keep my champagne away from the ducks. You know yourself.

That's the craic with me. This weekend we're off to Birmingham as we have been invited to a cocktail party with some friends and we're hoping to also fit in seeing Dippy on tour at the Museum and Art gallery and maybe even a sneaky trip to the champagne bar in the Cube... you know how I roll! So with that in mind, I must go and tackle some of the giant ironing pile that is threatening to eat my living room... but, after a week in Slough I'm still feeling so good about being at home that even ironing seems enjoyable. Goodnight!
Posted by Roisin Muldoon