Frederick, I have an important question. Why do humans not like me, call me 'Craphead'?

Well hello, all you lovely lot. Nic is out this evening, I have a crappy film on in the background and I thought the time was right to do a little blogging. The film is We Need To Talk About Kevin and it is very, very crappy. Lionel Shriver is obviously extremely cancelled, but I have read the book and the film was 50p in CEX, so here we are. I'm probably not going to make it the whole way through the film, but I will try to make it the whole way through the post.

The craic here is pretty minimal. August is always a bit of an odd month at work because there is a lot to do, but no need to be in the office to do it, so I generally work from home a lot. This is good and bad - little need to get up early or to be on public transport, but a lot of time spent looking at various spreadsheets and reports and not talking to anyone all day long. And while I hardly ever get that Sunday night feeling on a Sunday night, it is the best way to describe how I often feel during August - a strange dread of the autumn and the changes it always brings. I am not emotionally ready to say goodbye to the summer - the prospect of nine or ten months of grey skies, rain and cold is in no way appealing to me.

But anyway, I don't mean to be miserable. I think Tilda Swinton's very distressing haircut in this shitty film isn't really helping the old creative instinct!

As the heatwave left us a few weeks ago, my mind began to turn towards autumnal and winter sewing. In the depths of last winter, when life was extremely stressful, I went to Topshop and I bought a denim dungaree dress: 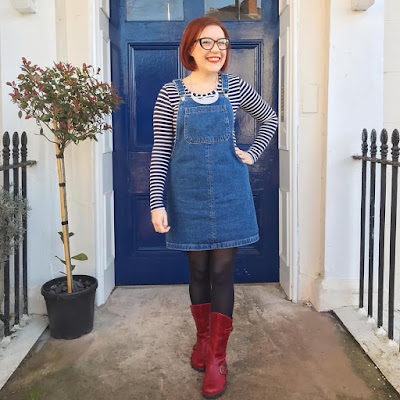 Me, in December, stressed out to the max. I bought the dungaree dress out of curiosity, really, to see if I liked the style and it suited me. The whole entire sewing blogosphere had gone mad for the Tilly and the Buttons Cleo pinafore and I was extremely certain that I did not want to spend the time making and fitting one, but I was happy enough to spend £35 to see if the style suited me. I ended up wearing this (and a burgundy cord one that Nic bought me a few weeks later) a fair bit in the winter. It's not that I loved wearing it or that was was warm and comfortable, but I honestly think that in a very stressful and unhappy time, it was comforting to wear something that looked so childish. If I couldn't go back to the comfort and safety of childhood, at least I could look like I had.

I probably will wear this dungaree dress again this autumn and winter. I still don't have a lot of interest in making a Cleo dress because, whilst I think this style looks good on other people, I'm not convinced of it on myself. I liked wearing denim again though and a few weeks ago I started to feel the urge to get some denim into my handmade wardrobe, so I bought the Victory Patterns Madeleine skirt pattern and some nice denim from Ray Stitch. 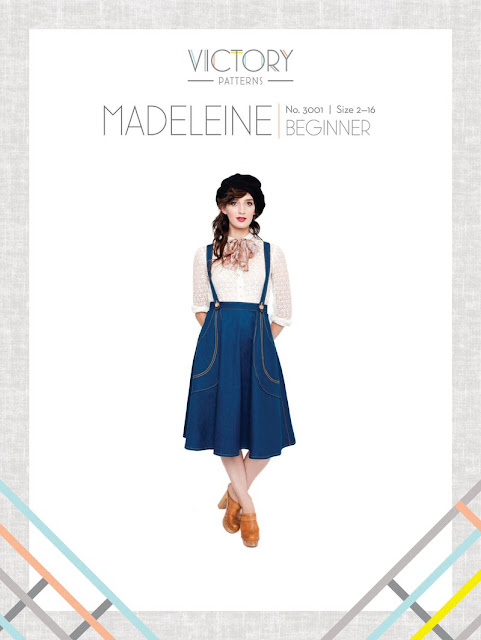 It's not a new pattern but I had never considered making it before because I don't wear skirts. I haven't worn a skirt since about 2007 and I had just decided that they didn't suit me. So I'm not sure what it was that put this pattern into my head, but it got in there and it just wouldn't leave. Isn't it funny how that can happen?

Anyway, the pattern and the denim arrived and then I faffed around for a while wondering whether I would be wasting my time making it. Like, would I actually wear it? It sounds silly, but I really got in my head about it. I can't even think why - maybe it's a side-effect of having spent too much time working from home! I had a few days off at the end of last week and decided to get cracking on it, and I spent Thursday morning and Friday afternoon sewing it. And I love it. LOVE LOVE LOVE it. 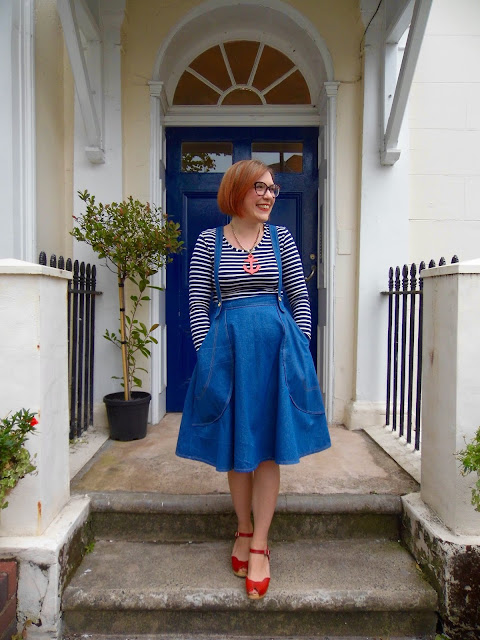 So yeah, I look goofy as fuck in this photo but I don't care. I really like how this skirt turned out!

The pattern is rated as suitable for beginners and I would say this is fair - it's a very simple design that is elevated by cute details like the giant pockets and the braces. I took my time over sewing it and nothing in it was very complicated. Although, do you remember I said I got in my head about making it? I did this about my measurements and which size to cut. The finished garment measurements put in me a 10, but when it came to cutting out the fabric I worried that it would be too small, so I cut out the 12... which turned out to be much too big! I ended up recutting the waistband to a 10 and then sewing large seam allowances at the side seams to get the skirt to fit the waistband. It wasn't a problem but I was pretty irritated with myself for making such a rookie error! 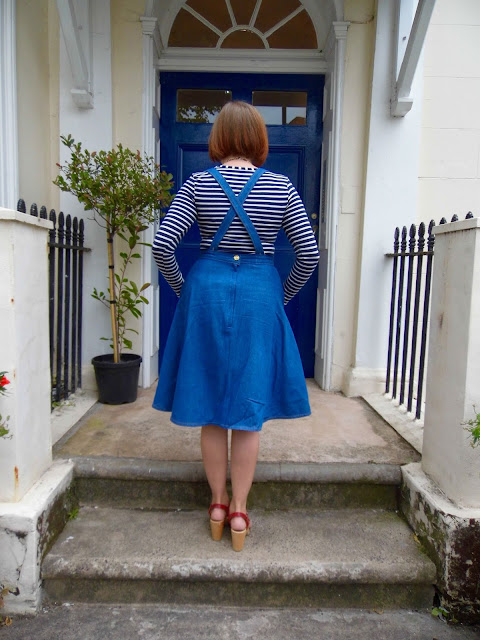 Really the only bit that caused me any grief was unpicking basting stitches, which I stupidly did in navy thread. I went out for dinner with my friend Charlotte on Thursday night and we shared a bottle of wine, for which the hangover gods decided to punish me whilst unpicking these bastard invisible basting stitches on Friday afternoon.

To be fair, it wasn't as bad as all that. I'd only had a few glasses of wine, after all. Still, I needed a strategic nap, a cry and some hash browns before I could get back on it. But after that it was all smooth sailing! 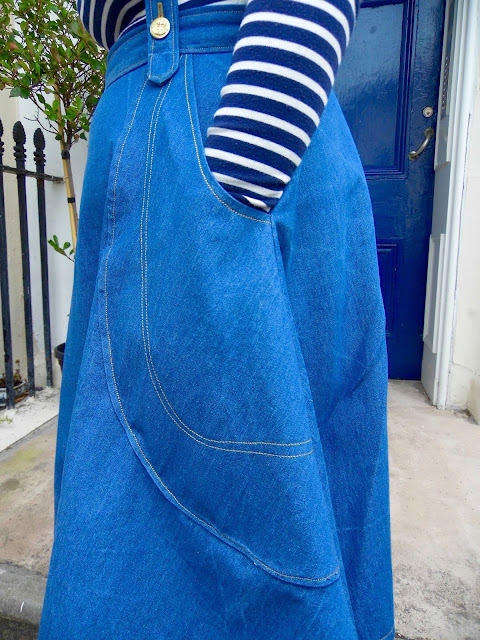 Here is one of my pockets! I probably should have bought topstitching thread and a needle and all that to do the topstitching on this dress, but I didn't. I bought a few spools of Gutermann thread in this golden colour and played about about with the triple stitch a bit on my machine and used that. It's not super even, but honestly I think the skirt is quirky enough that 100% perfect topstitching isn't a huge priority (but hey, if you want to judge me for it, enjoy yourself.) The pockets are very large and they are not flattering in the sense that they draw attention to the widest part of my body (my hips) but that's fine. 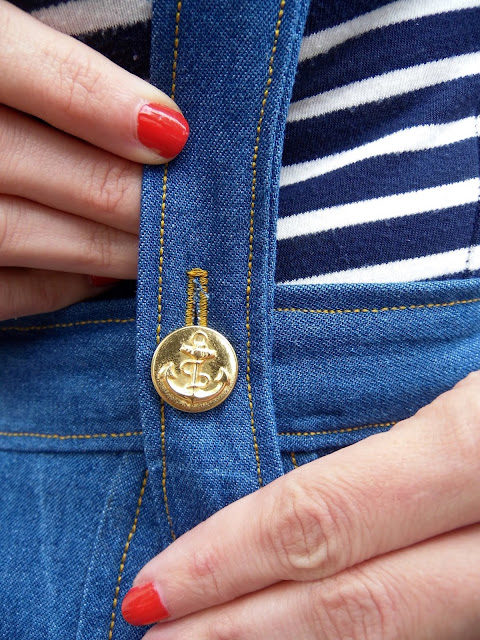 The braces are optional and removable. The pattern calls for two hidden buttons in the back of the waistband and two buttons on the front of the waistband. I have had these gaudy anchor buttons in my stash for years - like, I think I might have bought them in Walthamstow in 2011? I was very glad to use them, at any rate. The pattern has two different lengths for the braces and this is the short length. I think I could have sewed the buttonholes slightly further apart - wearing the braces makes this skirt quite high-waisted - but I have enough denim left over to make a second pair if I want them.

I do love how the braces look. I was a little worried that they would slip down the whole time and be annoying, but I wore the skirt for a day out on Saturday and they weren't an issue at all. 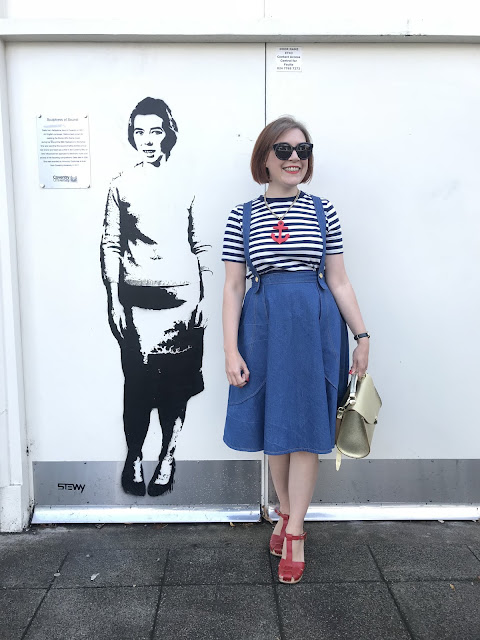 I enjoyed wearing the skirt so much on Saturday that I wore it again on Sunday. It was extremely cold and rainy and miserable and I was unhappy about having to wear boots, but I styled it out: 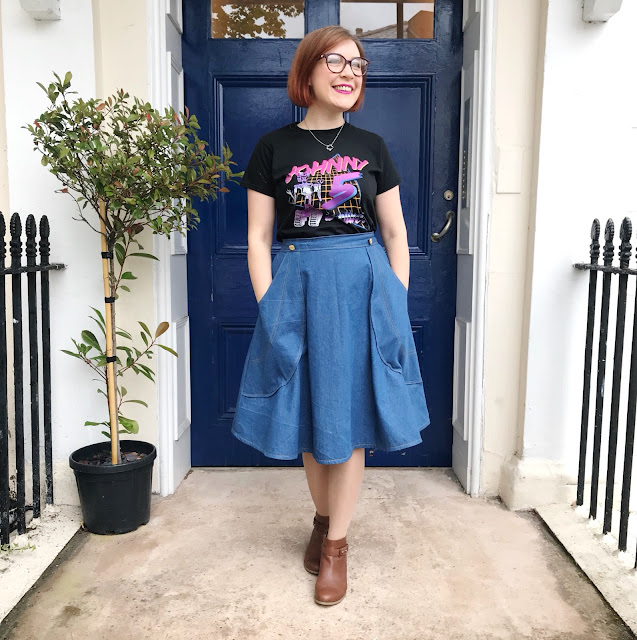 Yes, my t-shirt DOES have Johnny 5 on it! Nic bought it for me from Underboard earlier in the summer - I didn't have anything to wear it with and it was too good to wear as just pyjamas. Maybe I made a skirt just so this t-shirt could get an outing?! You might not know this about me, but Short Circuit 2 is one of my favourite films ever. NOT Short Circuit, which is vastly inferior, but Short Circuit 2 - it is very problematic in some respects (Fisher Stevens in brownface... like, WTF) but as a story of an outsider trying to be accepted by society it is ICONIC.

Me, strongly feeling myself in my Johnny 5 t-shirt

So, a surprising success but a success. I am very happy with my skirt and I liked the denim so much that I bought more - inspired by Zoe's version, I'm going to have a go at making the Jennifer Lauren Ivy pinafore dress. I'm far less certain that it'll suit me, but it'll give me the option of dressing like a toddler when things get tough without me worrying about flashing my bum to the world because yeah, that Topshop dunagree dress is short.

There probably isn't room in my wardrobe for many multiples of the Madeleine skirt, but I do think it would look very nice in red. So perhaps I will make myself a red one... red denim, or red drill? I'm on the lookout for something suitable. A cheery red skirt might help see me through the dark days of winter. It might. 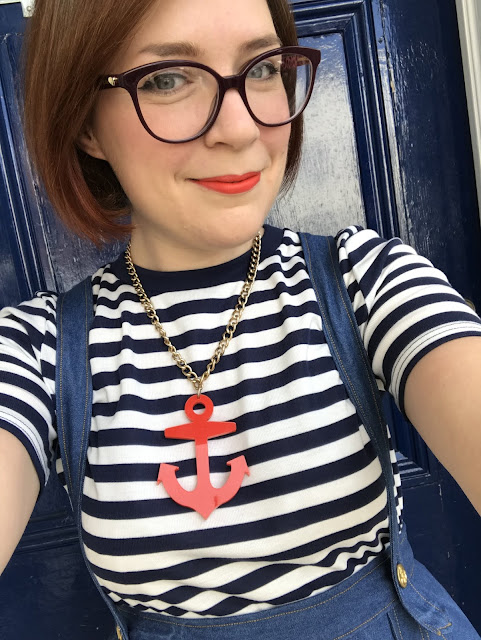 Look, no reason for this photo. It doesn't add much, but I think I look cute in it. This stripy t-shirt is from Topshop.

So that is the craic with me anyway. The terrible film is over and I have run out of things to say, so I'm off. Until next time, mes amies. Good night!
Posted by Roisin Muldoon