Hello my dears! Unsurprisingly, the dream of blogging more often has sort of fallen by the wayside in the face of a busy summer. But, sure, what can you do.

Anyway, things are grand here. I had a busy July at work with lots of meetings and then running a recruitment exercise on top of that so doing lots of sifting and interviewing. Spending long days in often windowless meeting rooms isn't optimal during a heatwave, but at least my wardrobe of 90-95% summer dresses and 18,000 pairs of sandals was up to the job. 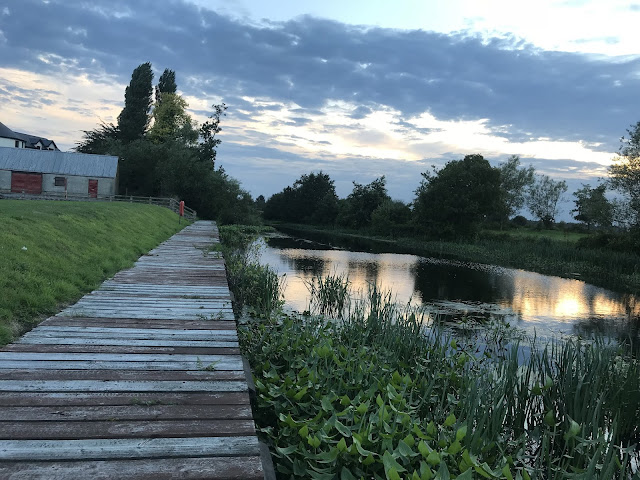 On Thursday night, we went to the shore of Lough Neagh at Maghery, which is about half an hour away from my parents' house. My dad wanted to scope out where the moonrise might be as he wanted to take photos of the blood moon - sadly, he wasn't able to do this because the weather changed, but it was still so nice to get down to the loughshore on such a lovely evening. 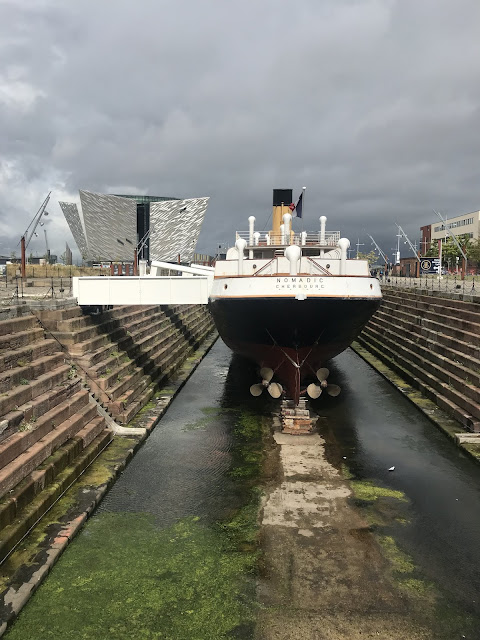 On Saturday, we went to Belfast. It was actually quite a classic Northern Irish summer day - by that I mean it was cold, there were gale-force winds and it was shitting it down with rain. When I looked at the forecast for the weekend earlier in the week, it looked like it would be fine and dry so this change in the weather necessitated an emergency trip to Joules to buy a coat (for which I was scolded on Instagram by someone who told me I was stupid for not checking the weather forecast, and then that I must have been unable to understand it when I said that actually yes, I HAD in fact looked at the forecast. Ugh.) Naturally, I decided that this would be a great day to take Nic to the Titanic quarter. Love to be at the shipyards when there is a severe weather warning, what can I say?! 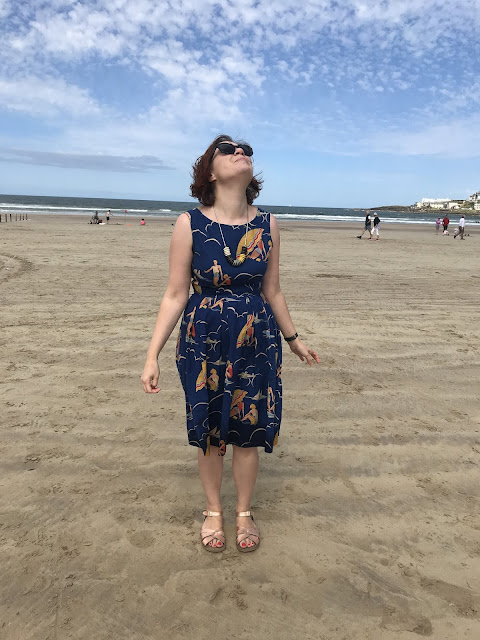 On Sunday, we went to Portstewart Strand so I could put my feet into the Atlantic. It turned out to be a reasonably stressful day trying to organise a large group of people who utterly resist any kind of organisation. It was worth it, though, for these views: 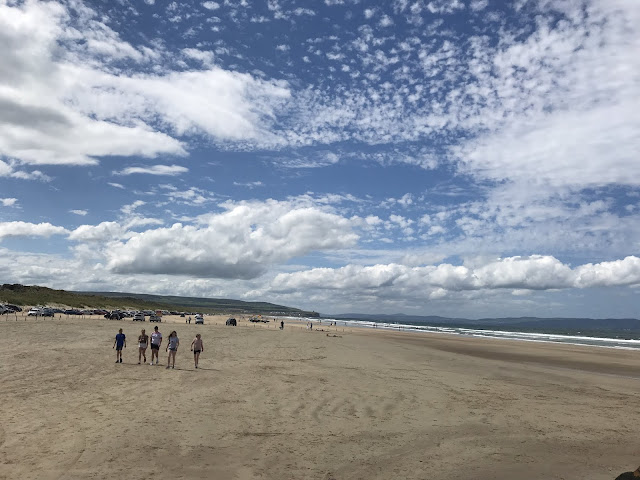 I MEAN. It was actually the first time I had been to Portstewart (growing up, we always went to Portrush because, Barrys, right?!) but I definitely want to go back so I can explore this beach without having to worry about pleasing anyone else.

It was really good to be back amongst my people for a few days - even if it wasn't relaxing, as such, there is something really special about going home and I love Northern Ireland a lot. 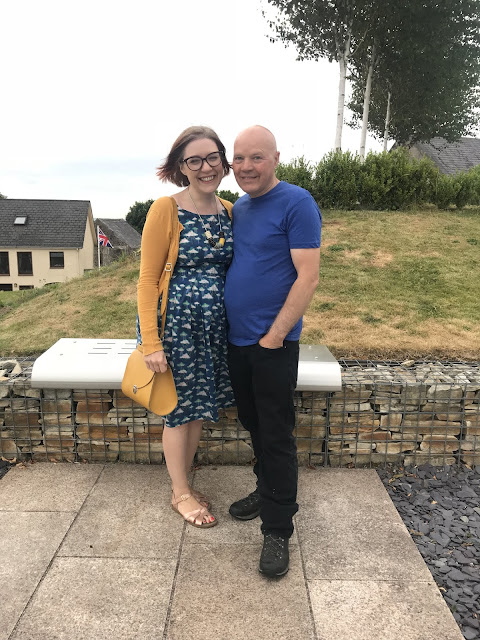 Me and my daddy in beautiful(!) Dungannon (which my computer tries to autocorrect to 'dungeon' like, lol)

That's the craic there. It's been a busy but good summer so far and I am looking forward to a slightly more relaxing August.

Clearly I have been sewing, so today I'm going to show you a dress I made recently. Last month, I bought Love Sewing magazine because I was intrigued by the pattern that was the cover gift: 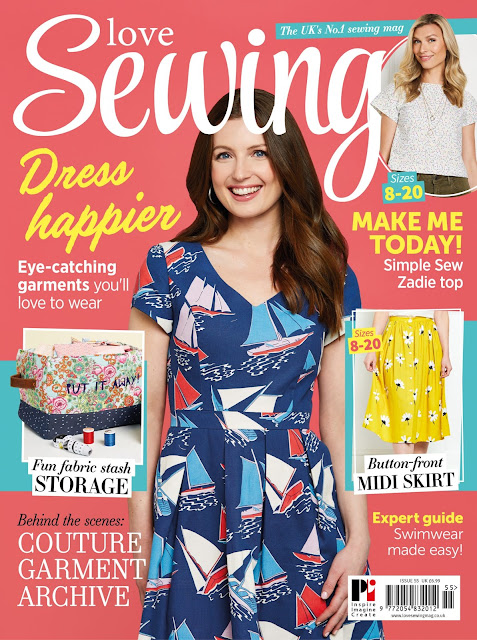 The pattern is McCall's 7714, which has a cute princess-seamed bodice, an inset waistband and options for a full pleated or slim skirt. It's probably obvious to anyone why I liked this pattern, but I was also very into the fabric used on the cover, which is some cotton duck from Cath Kidston. I liked it so much that I decided that I had to have this specific dress. You can wring your hands if you want over my lack of creativity and I will not care. I loved this dress, I wanted to make it, and I could so I DID. 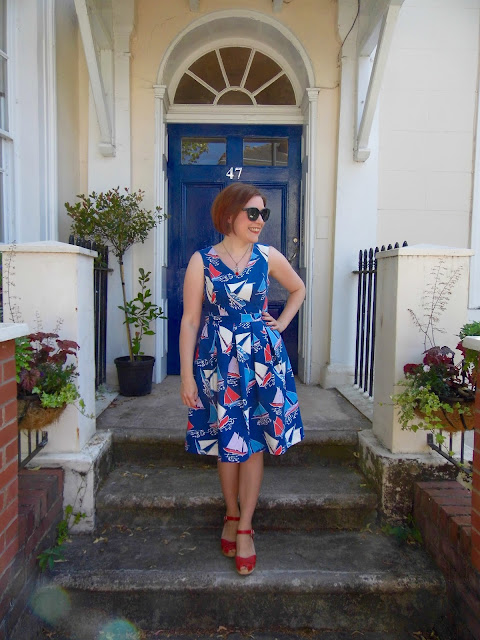 I've sewn enough McCall's and Butterick patterns now to be fairly familiar with their block and I find that it largely fits my body quite well with minimal adjustments. For this dress, I shortened the bodice along the petite lines and I took a little wedge out of the back neckline and that was it. I think there is an error in the pattern - the waistband piece for the size 10 bodice just did not fit the bodice pieces, and I'm not sure if the bodice or the waistband is out. I discovered this when I made a toile and was able to work around it - I just drew another waistband to the appropriate measurements, which was very easy because it is just a rectangle. 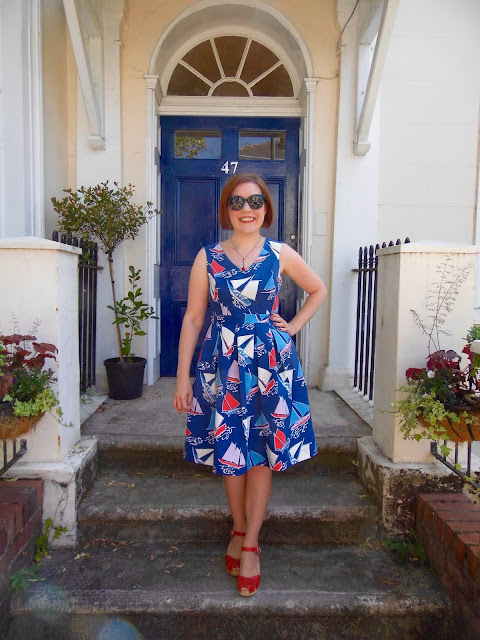 Even though I made a toile, I found the finished dress to be a little big and after I took these photos, I went back and took it in by 5/8 on each side and I am much happier with the fit now. 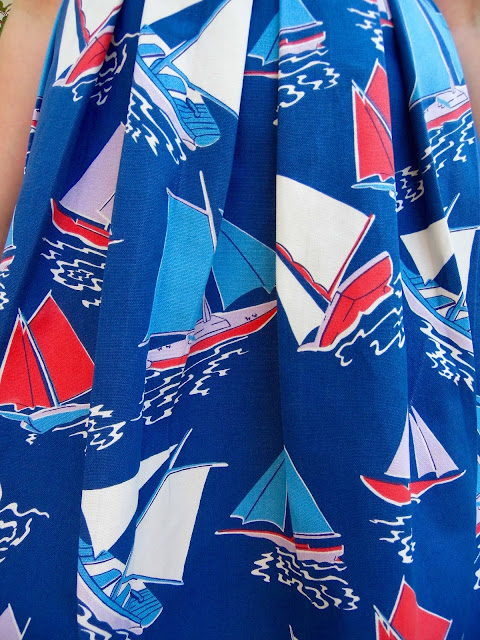 The fabric isn't a dressmaking fabric - it's a heavier-weight cotton with no drape. That said, it is quite soft and is surprisingly comfortable to wear. It was easy to work with and takes the pleats really well. These Cath Kidston prints are usually around £20 per metre and are very wide, but I got this in the sale at £10 per metre and I bought 2m. 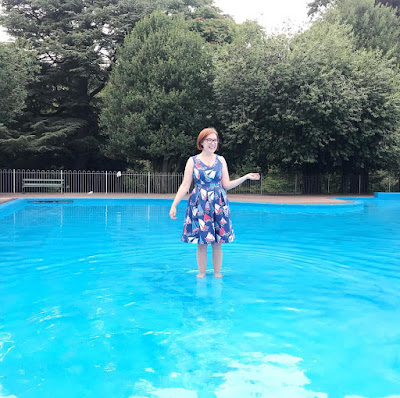 We live far away from the sea but I was able to take the dress for a dip in the local toddler pool - it was abandoned at this point because of the football.

I wish I could think of more to say about this dress, but I am a bit stuck for words! Apart from the annoying waistband thing, it was very straightforward to sew and I have worn it lots. Obviously I love the print - I am still not over my love of all things nautical - and, having avoided patterns with set-in waistbands for ages, I am delighted to have found a pattern that works on me. I also really like the v-neck, which is just the right shape for me! 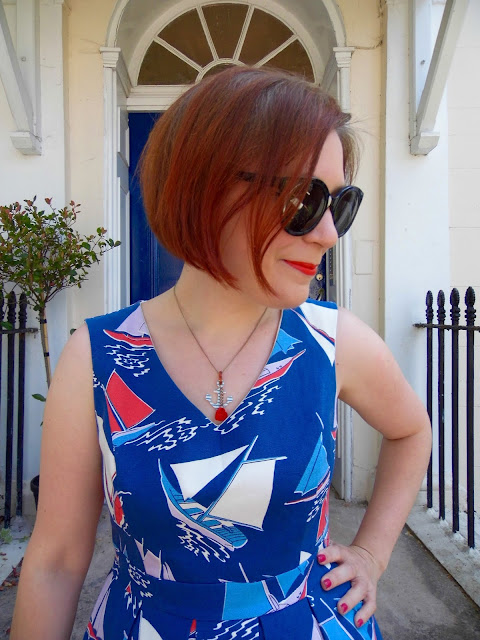 The dress is named for a place I have never been - Mossby Strand in Skåne, Sweden. I've been working my way through the Henning Mankell Wallander books over the past few months, having watched and loved the Krister Henriksson television series last year. I have watched a few episodes of the BBC adaptation as well, known in our household as Brannander, but I'm not a fan - despite them being very faithful adaptations of the books, there's just minus craic in them. It's a shame, because I am overall quite a fan of my fellow countryman Branagh, but it turns out that he can't hold a candle to my One True Wallander, Krister Henriksson. Also, you know, I just CANNOT with Tom Hiddlestone, so there is also that. 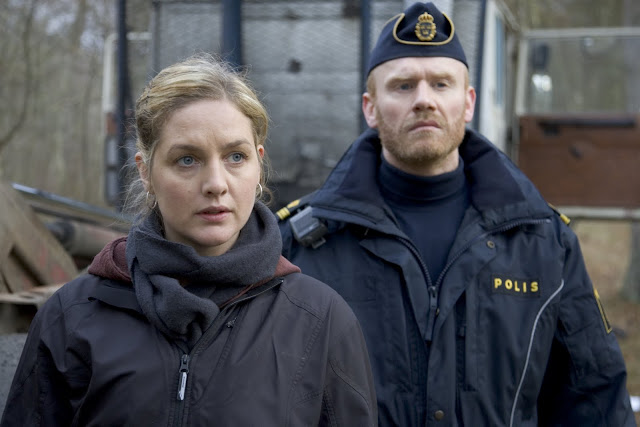 Linda and Svartman. One of the reasons I can't get along so well with the BBC series is a lack of Linda as policewoman and no Svartman - the character was created for the Swedish TV series and sort of based on the Svedberg character in the books, but he is so great in the TV show for being a little bit crap. I love him.

I don't mean to be some Nordic Noir wanker and it's not really a question of authenticity or anything - my preference is largely down to the fact that the Swedish series is just much better craic. Also, because it starts with Before The Frost, the first 13 episodes and the final six episodes feature Linda Wallander as a policewoman. I loved Johanna Sällström's performance as Linda in the early episodes (she sadly died in 2007) but overall the Swedish version just has lots more women in it and they're all awesome.

Anyway, at around the time I was making this dress, I was reading The Troubled Man, and in it, Wallander reflects on a place that has become emotionally significant to him over the years:

Every time he came back to [Mossby Strand] he had the feeling that this stretch of coast, not very remarkable in itself, certainly not all that pretty, was nevertheless one of the central points of his life. This was where he had taken Linda for walks when she was a little girl; this was where he had tried to make peace with Mona when she told him she wanted a divorce. This was also where, ten years ago, Linda had told him about her ambition to become a police officer, and that she had already been offered a place at the police academy. And it was here that Linda had told him she was pregnant.

I'm often asked how I come up with the names for my dresses and how I remember them and there isn't one answer to this question, but one of the answers is that they're named for places or moments or thoughts that I'd like to keep hold of, and this is one such example.

So yeah. That's the craic with me. I must go now and get on with my Friday, but I'm sure I'll be back soon. Have a good one!
Posted by Roisin Muldoon