You know I always wanted to pretend that I was an architect. 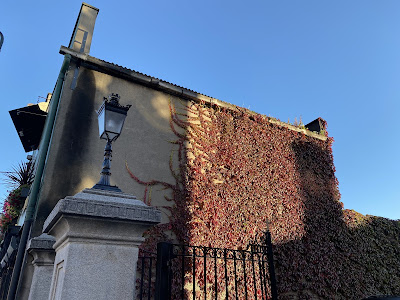 For the first time in a very long time - maybe ever, in fact - I find myself not actively hating the onset of autumn and winter. I think it might be to do with the fact that I now live in a home that has central heating (our flat in Leamington was brutally cold in winter as the only heating was from two ancient storage heaters and all the windows were single-glazed and draughty) but it's probably some sort of autumnal denial because we have been enjoying some unseasonably warm weather recently.

Since I last blogged, life has continued to shift in interesting ways. The short-term job I had been doing from the beginning of June came to an end in mid-September, and I was offered a permanent job in the same organisation but in a different department. Working there had not been my plan when we moved - I had job offer for an assessment job somewhere else. But I enjoyed the short-term job so much that I was excited to accept their permanent offer. I started the new job at the end of September and I'm enjoying it a lot so far. I've also started working in the office two days a week, which feels a little weird (it definitely feels strange to wear a mask all day) but it's good. I can walk to work, which is wonderful. My colleagues are nice, the job isn't stressful and, importantly, the work canteen is superb and cheap.

I definitely had a moment of doubt of like... should I step out of the field I had been working in for 13 years. Does that mean I have wasted the expertise I have built up, is this a backwards step etc... the way we are taught to think about our work life is that a career is a ladder that you are slowly climbing up, and that up is the only direction you should be travelling. But it isn't that. We moved to improve the quality of our lives and work is a big part of that - my old job was very bad for my mental health! Taking a chance on something else feels like the right thing to do. 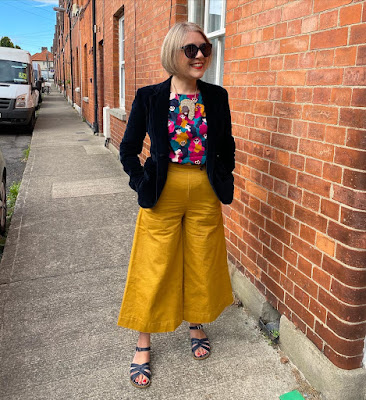 Here's what I wore on my first office day of my new job - mustard Flint pants, RTW blouse and vintage velvet jacket.

If you're here for the sewing, prepare to be disappointed. I haven't been doing much sewing. Well - a little, but not much. I'm working out what my new wardrobe needs are, so I'm not extremely motivated to do a lot of sewing.

Something I did spend time on, though, was making a replacement pair of denim Jenny overalls. The first pair I made - my first pair of Jenny overalls - were absolutely great and I wore them until they were no longer really wearable: 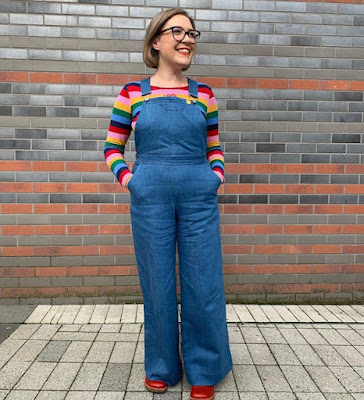 Look at this sweet summer pre-global pandemic child! I made this in October 2019 and wore them LOADS. Lots and lots. They were made from a stretch denim that ended up not wearing well - they shrank and faded quite badly so after we moved, I retired them. And I have numerous other pairs of Jenny dungarees now but there was a gap in my wardrobe for a denim pair so I bought some rigid denim from a shop in Dublin and made another pair: 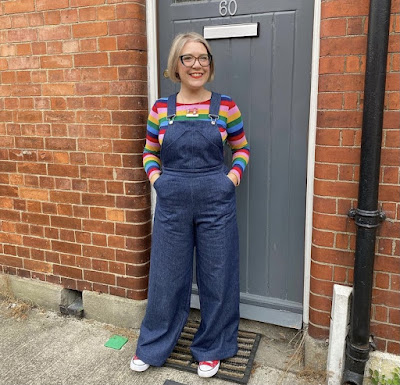 There's not a great deal to say about these, but I made these in early September and they're great. The denim is an 11oz washed indigo denim, and it feels lovely to wear. I have ended up hemming them slightly shorter than they are in this photo now though because they were slightly too long. Anyway, they're great.

I had a birthday recently and I made an impractical birthday dress from some cute knockoff D&G fabric that I bought from Ali Express: 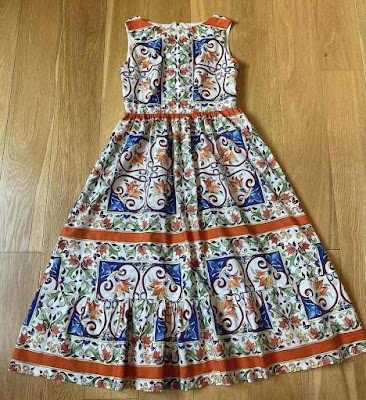 I wasn't going to make a special dress but we decided to have a couple of days away for my birthday, so I thought I might as well. I'd had the fabric for a little while and hadn't been sure what to do with it. I used the Emery dress by Christine Haynes and I just added a ruffle to the hem. Again, this is kind of a riff on something I've made before - the Majolica dress - which I made for my birthday in 2019 and was able to wear on holiday in the south of France: 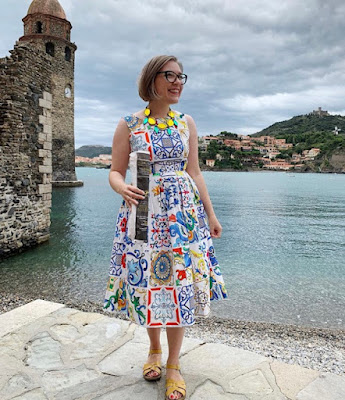 I love this dress so much, you guys. And it's still very much in rotation!

We didn't go to the south of France - I'm not ready yet for international travel - but we had a couple of days in Cork city because neither of us had ever been before. 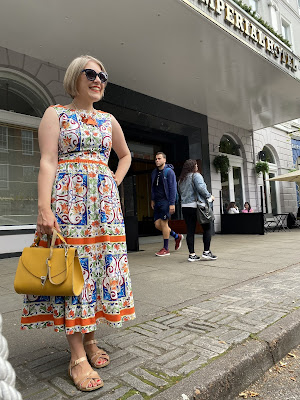 I'm really pleased with how the dress turned out and I'm even more pleased that the weather turned out so nice when we were in Cork and I could wear it!
Our trip to Cork was our first holiday since the start of the pandemic, apart from two nights in a caravan in a village outside Leamington that we had last September. We took the train down and stayed in a hotel so it was our first long train journey since maybe January last year and the first time we had stayed in a hotel since December 2019. 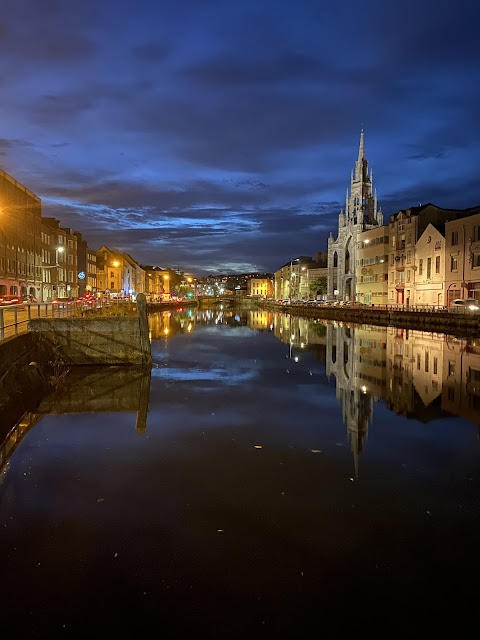 We stayed in the Imperial Hotel, which is in the city centre. It's apparently where Michael Collins stayed the night before he was killed. It's a nice hotel - the staff were lovely - but it was a bit of a shock to the system to be staying in a hotel. It was so noisy! On one of the nights we were there, there was a gig on nearby and it was incredibly loud. On the second night, the hotel bar had their music up so loud that the windows were rattling. And there was nobody in it!! The music went off at 11:30pm but it was not the relaxing hotel experience we might have hoped for.
Still though, I'm glad we did it. Cork is a very lovely city and the people are very friendly. It was good to be somewhere new. I'm trying to gradually reintroduce some of the things from the time before that we haven't been able to do and travel is one of them. I still don't know about international travel, honestly, but at least I feel like I can explore Ireland a bit more. Just not to stay in a hotel with a disco.
The beautiful late summer and early autumn weather has meant it's been easy for us to spend time exploring Dublin, which has been great. Dublin is beautiful. 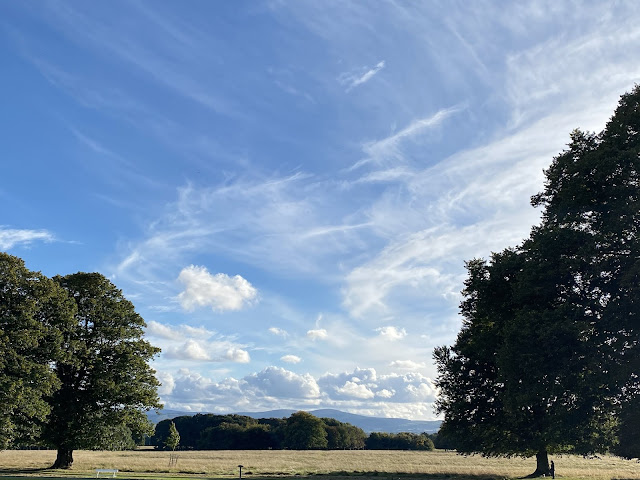 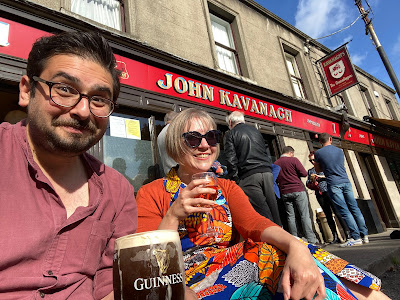 Here's us having a drink outside John Kavanagh 'The Gravediggers' pub in Glasnevin last weekend
So that's the update. I'm hoping to do a bit more sewing over the next while so maybe I'll have some sewing to share again. What I've found in moving - even four, nearly five months on - is that it really is a massive change. I know that sounds like a daft thing to say because like... OBVIOUSLY. But of course you can never truly anticipate how a life-change will make you feel and certainly not how changing literally every aspect of your life will make you feel. Emotionally, there has been a lot going on. It's going to take a while to settle down, I guess.
Anyway that's it from me for now. I'm going to leave you with a photo of one of my birthday presents from Nic: he bought me the Seinfeld Lego set and I spent a couple of happy evenings building it and it makes me laugh every time I look at it: 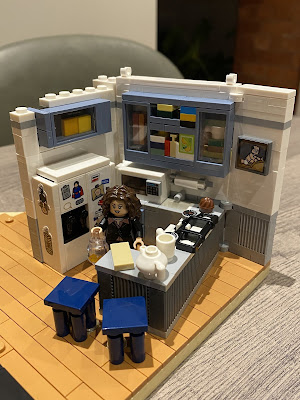 This is only a section of it, mid-build. It's Elaine in Jerry's kitchen. That's a muffin top on the counter! That's a picture of a Lego Larry David on the fridge! And yes... that is a sexy Lego George on the wall!
So that's the craic with me. Until next time, friends!
Posted by Roisin Muldoon