But the truth is, I'm not going to get wine of any temperature in prison. There are no fine wines in prison.

Hello! It's been a little while, so what is UP?!

Things have been pretty good. We have had an extremely beautiful autumn and beginning of winter in Dublin (in Ireland, winter starts in November): 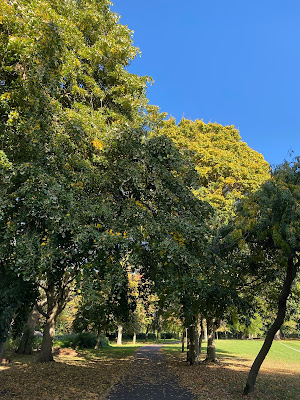 Our local park looking gorgeous in the sunshine
I guess we're still in a bit of a honeymoon period or whatever, but it's been lovely to be able to continue to explore the city. It only really started to get cold last week so we were very spoiled with the lovely weather. 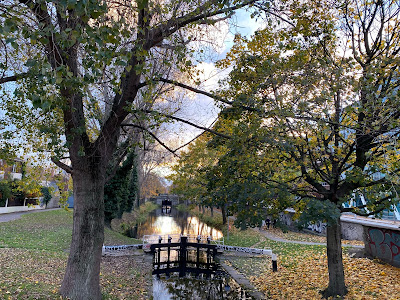 The Grand Canal in October
My friend Ellen and her family visited at the end of October, which was the first time any of our friends from England came to see us. It was wonderful! They stayed in an airbnb nearby and we had so much fun together - it was brilliant to show them the city and our neighbourhood. It meant to much that they took the trouble to come to see us.
Also in October, my nephew Fionn came to stay for a sleepover with my parents. He had just turned 8, so we took him to the toyshop to choose a present, had a little pizza party at home and went to the seaside at Sandycove. It was a lot of fun and of course it was completely and utterly exhausting. 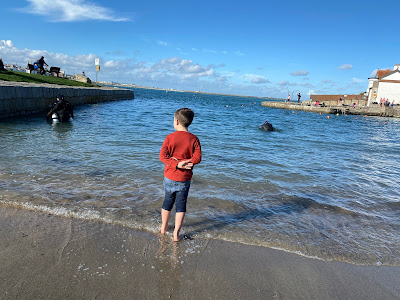 Fionn inspecting the divers at Sandycove beach
Fionn enjoyed himself immensely and has been telling people since then that when he grows up, he's going to live in Dublin. So that's super cute.
We've also had my parents to visit a couple of times. My dad was here at the weekend - we had planned to go to a lecture together, which got moved to zoom, but he came down anyway and it was brilliant - although very cold! We went down to Wicklow on Saturday and went to Enniskerry for lunch and to Powerscourt to see the waterfall. My photos are crap but it was so beautiful: 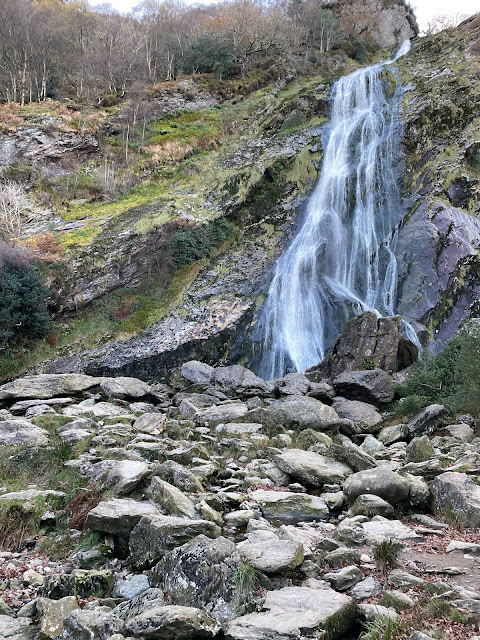 It's Ireland's largest lingerie section waterfall, so I understand. I read that... somewhere. 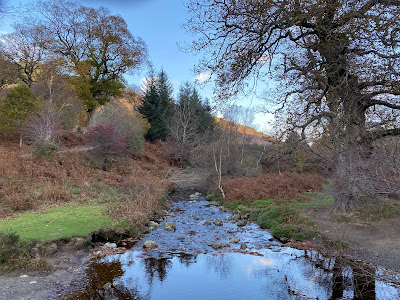 The river Dargle
We also spent a very chilly morning and early afternoon on North Bull Island at Clontarf. It was so cold and extremely windy but very, very beautiful. 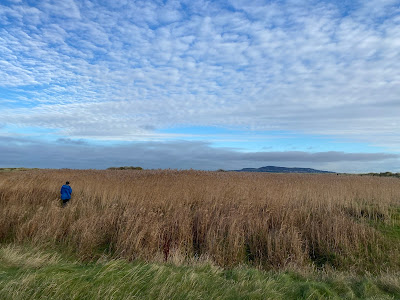 I love it here. It still really feels like a dream to be by the sea and near the mountains and in a beautiful city, all in the one place! I feel very lucky.
Work is still going well. Unfortunately, because cases are high here, the government has advised everyone to work from home if they can. It's not essential for me to be in the office, so I'm at home for the foreseeable future. I feel sadder about this than I thought I would - I was really enjoying my routine of a couple of days a week in the office. But it could be worse, and luckily the job itself continues to be interesting and stress-free... the stress-free part is especially pleasing when I hear from friends from my old workplace about how it is going there. Spoiler: it is NOT stress-free.
I haven't been sewing loads, although I have a few projects lined up (including a dress for my niece). Somewhat unexpectedly, I've been having a bit of a ruffles moment. I don't know why. I think it started when I made my birthday dress and just randomly decided to put a ruffle on the hem because it seemed like it would work with the fabric - and it was just fun to make and fun to wear. I wanted an autumnal version so I made a dress using some ankara fabric that was in my stash: 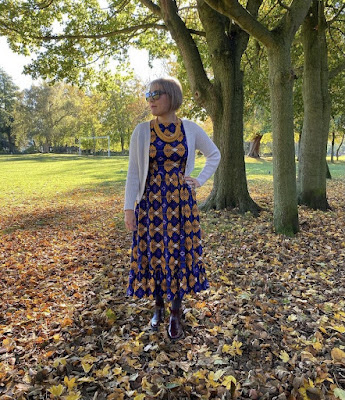 This is sort of inspired by the beautiful dresses made by Kemi Telford. You can't see the details here because I didn't photograph it with that in mind but it's very simple - it's a By Hand London Anna bodice with a gathered skirt and a ruffle hem. I sewed it up on an impulse one evening and I'm pretty happy with it - it's a little big in the bodice for some reason but that means it layers up nicely and it's very comfortable. I've also worn it with sandals and it looks cute like that too. So that's a winner.
Emboldened by my enjoyment of ruffles, my mind turned back to a question that had been troubling me for months, which was this: is the Bakerloo blouse by Nina Lee patterns very cute or is it Clown City? I couldn't decide. I'd seen several really cute versions of it (including the samples Nina used on the pattern envelope) but several that are... not for me. I didn't know if I would wear it because the collar is so large. So I decided I'd buy a similar blouse to see if I liked it. 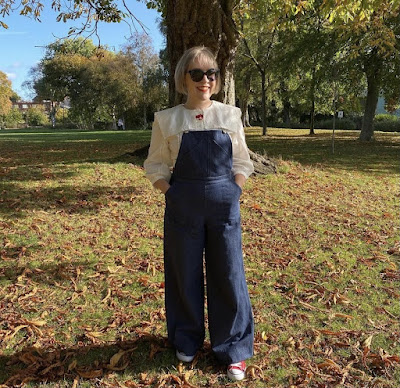 Actually this didn't help me decide. I like it, but I also think it makes me look a bit like the Child of Prague. 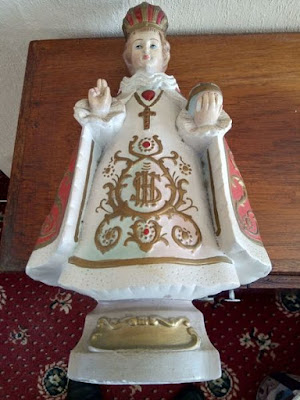 Just plant me in the garden!
What actually finally made me go for it was the fact that Nina has moved and has stopped producing paper patterns and I fucking hate PDFs, so I bought the pattern and gave it a go with some Liberty poplin I had in my stash. 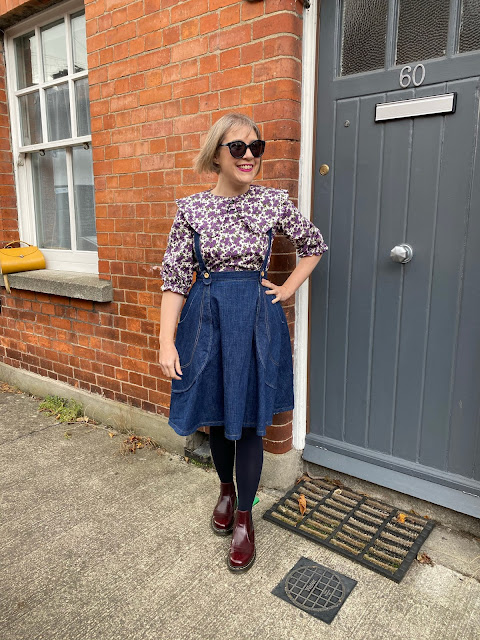 Nina Lee Bakerloo blouse with Victory Patterns Madeleine skirt
I do like it. The collar is so enormous though, it's comical. It's so big! But somehow I think it works, and I really like the sleeves. It was also really fun to sew. I sewed a straight size 10 and didn't make any modifications - I probably could have but I'm lazy like that. Anyway I have some more Liberty fabric - this time some of their quilting cotton to make the dress version so hopefully I'll get around to that at some point soon. I have also worn this with my dungarees and I think it looks cute: 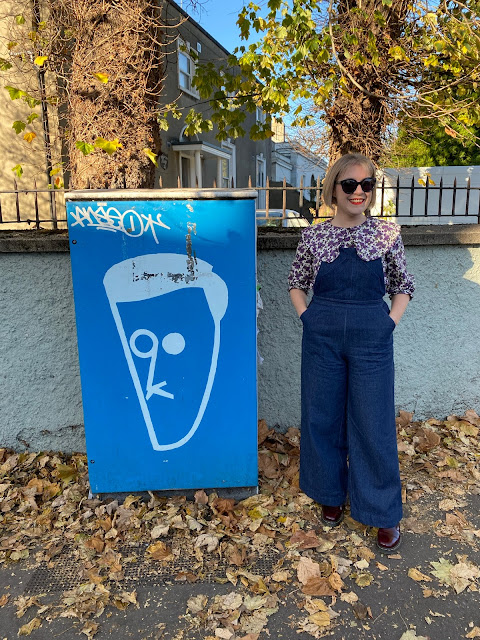 Hanging with James Joyce in Ranelagh
It's a lot less plaster baby Jesus in a printed fabric, which is good - although I have worn the RTW top a few times too. If there's anywhere you can get away with looking like religious statuary, it's Ireland.
I also bought an amazing ruffle dress. I spotted this Kate Spade dress in the spring and thought it was awesome and kept going back to look at it but didn't buy it and then it was reduced by 50% so I thought, why not. 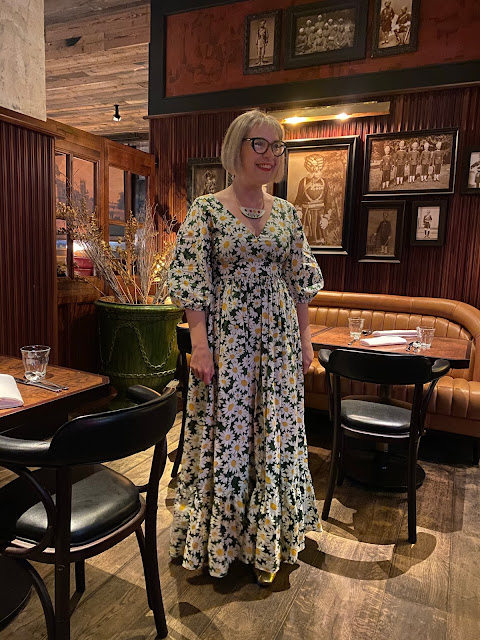 I look goofy here but I don't care. It has ruffles! It has big sleeves! It's apparently a 'midi' dress but it's definitely maxi on this shortarse! It's pretty simple - it is unlined (apart from the bodice) and it's made from a medium-weight sateen - grown-on sleeves, an inset waistband and a gathered skirt: I could definitely have made my own version. But the fabric is so lovely and sometimes you just have to buy the dress. I wore it out to dinner last Friday night and I might wear it on Christmas but otherwise it's going to hibernate until the spring. Probably by then I'll be the only one running about in ruffles but fuck it. I don't care. I'll be living my best Margo Leadbetter life. 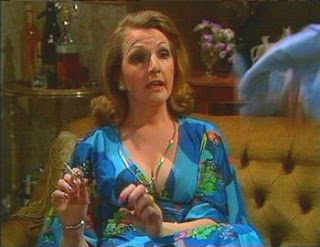 Anyway, that's the craic with me for now. Until next time!
Posted by Roisin Muldoon