Don’t play mind checkers with me, man. I’m not in the mood.

Hello! As my eight-year-old nephew would say, WHAT'S POPPIN?? (He really does say that, and it makes me laugh every time I think about it.) It's been a little while since I last had any motivation to write, but sure that's how it goes.

Things have been pretty good! One of the most noticeable life improvements since we moved is that the pace of life is very different. This is largely due to our jobs, which are far less stressful than what either of us had been doing in England, but it's also that even in the city, the pace of life here is generally a little more gentle. It's one of the changes I've been working out in myself - who am I when I'm not quite stressed all the time?!

The early part of the year was chilly and damp, but with some really lovely bright days dotted around. In February, we had a couple of days away in West Cork as Nic's work took him to Skibbereen. We broke up the journey with a night in Cork city, partly so that I could book us a table for dinner at Café Paradiso. It's worth going to Cork just for Paradiso - Nic described the dark chocolate sorbet as 'life-changing'! 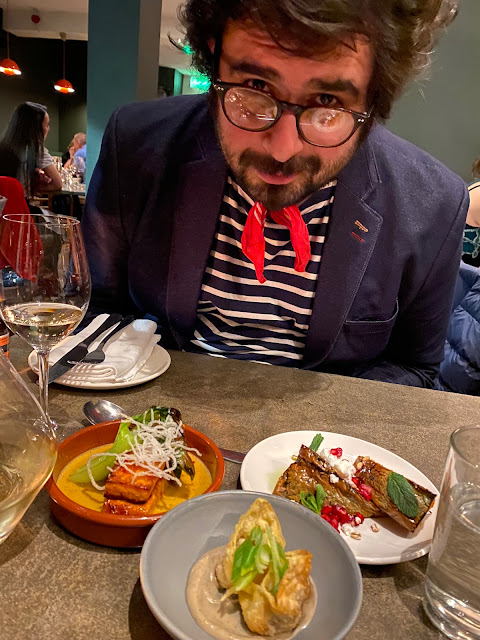 No photo of the dark chocolate sorbet - we were too blissed out by the time we got to dessert! 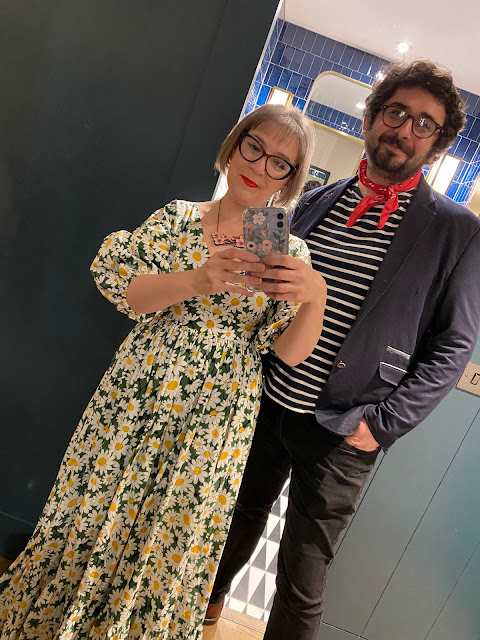 Overdressed for dinner
The following morning we took the bus down to Skibbereen, which is right down almost about as far south as you can go in Ireland. It's a very small town and there isn't a huge amount to do - especially if, like us, you don't drive - but we had such a wonderful time. We were there to visit a film producer that Nic is working with, so we spent some time with him and his wife and had a lovely dinner at their home. The rest of the time we spent pottering around the beautiful town and hanging out in O'Brien's Corner Bar, which shot right to the top of my list of all-time favourite pubs. 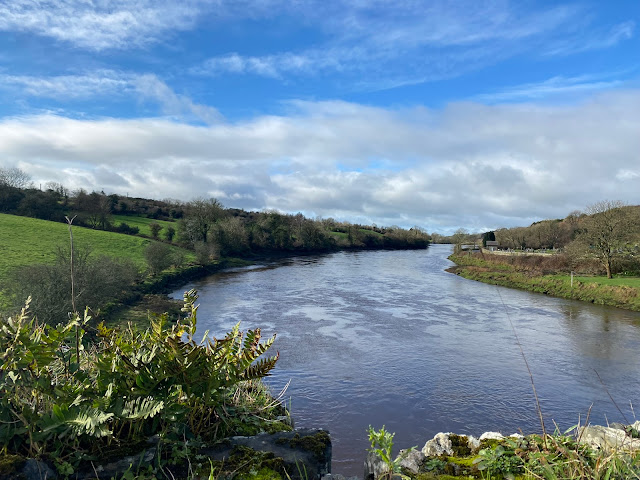 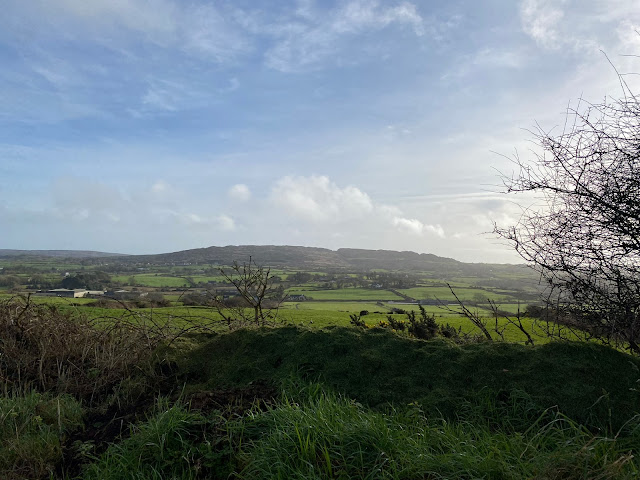 West Cork countryside from the Compass Loop walk
None of my photos remotely do justice to how lovely the area is - it was breathtaking even on a cold and drizzly February day, so I can only imagine that it would be exceptionally beautiful in the spring and summer. 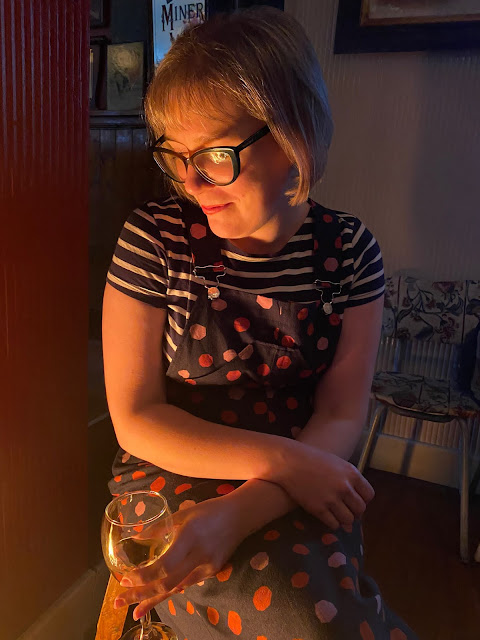 Blissed out by the fire in the Corner Bar

Hopefully we will be able to make a return journey later in the year because I would love to go back. What made the trip so special was the way it restored my confidence a little in being able to socialise without being crippled by anxiety! We had a lovely dinner with David, who invited us, and his wife Patsy and their guests Ciara and Barry - it had been a long time since I'd had the need to socialise with people I don't know and I was a little out of practice, but I really enjoyed myself. 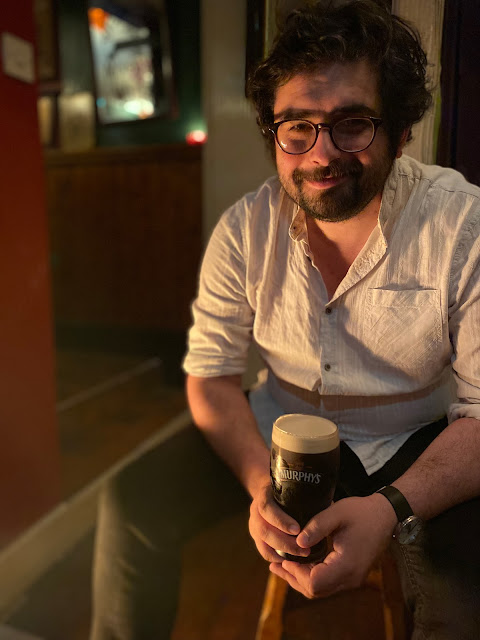 Spending time in Cork turned Nic into a Murphy's fan
Spending some time away also made us both feel a little bit more confident to travel again so, for Nic's birthday, we decided to spend a few days in Paris. This felt like an impossible dream even as we were booking it, honestly. I was a little tormented if I was being completely stupid in doing it. I still don't know that it wasn't a stupid thing to be doing, to be fair. But it was wonderful and I'm so glad we did!
The last time we were in Paris was in 2018, so it was a very emotional return. And it was quite different this time. It was the first time we had flown to Paris, rather than take the Eurostar (one of the main things I miss about living in England, I have to be honest) and the first time we stayed in a hotel. I opted for a hotel rather than an apartment because it felt like it would be less hassle and it was similar in terms of cost. We stayed in a hotel in the 17th, which was lovely. We had a balcony! We had a long weekend and while I had been prepared for it to be very chilly and wet, the weather was absolutely lovely for most of the time we were there. 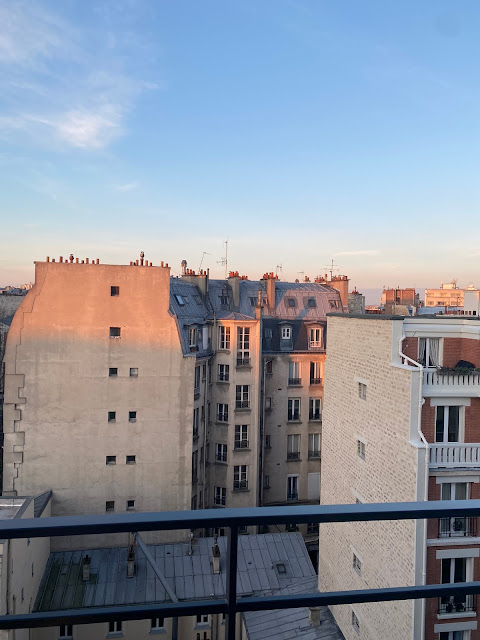 Morning light from a balcony in Batignolles
We arrived late the night before Nic's birthday, and the day itself dawned bright and sunny. It was the first day of the year where I was able to wear sandals, which was a real treat! We spent the morning strolling around Batignolles before walking down to the river and having lunch in Saint Germain-des-Prés. From there we took the bus along to the Grands Boulevards to enjoy the view from the roof of Galeries Lafayette and then up into Montmartre to visit some old haunts. In the evening we walked out along the canal to Porte de la Villette. 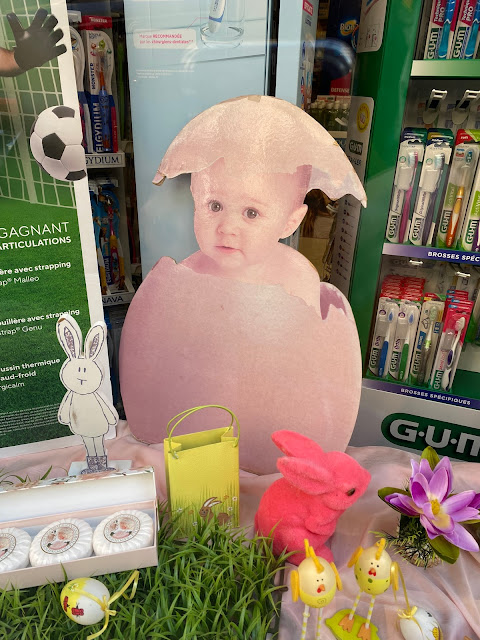 Window displays in pharmacies are something I always really enjoy when I'm in France. I don't need to explain why. 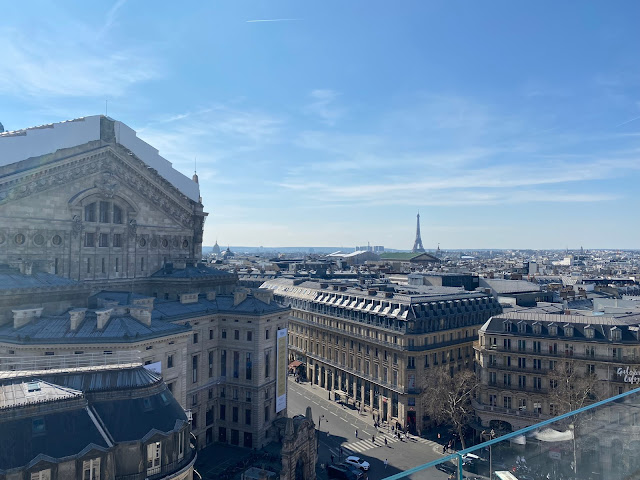 On the roof of Galeries Lafayette 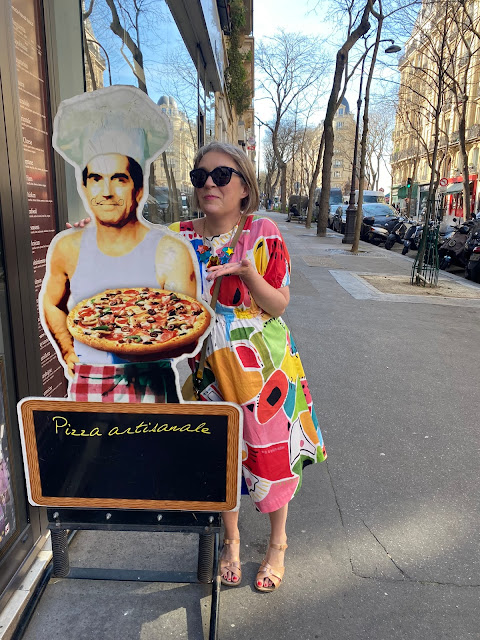 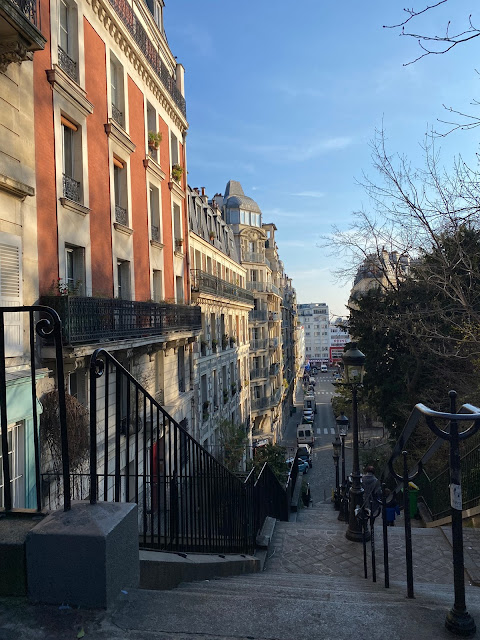 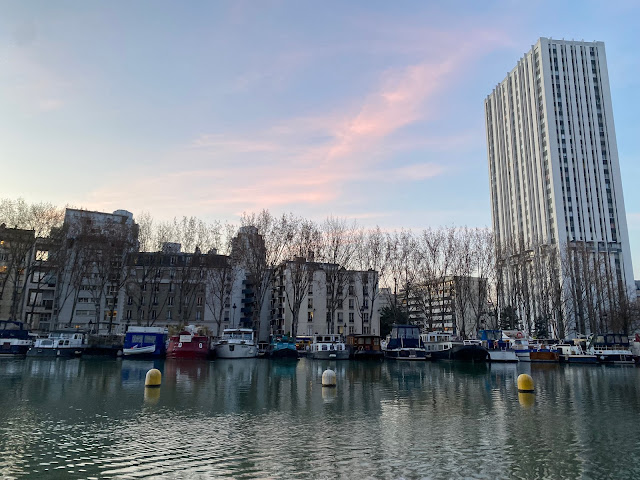 Candyfloss skies over the canal Saint-Denis

The following day, we had tickets to go to an exhibition at the Musée Yves Saint Laurent on Avenue Marceau. Nic had found this exhibition, which is part of a bigger exhibition series across Paris. This one focused on archive materials that focus on the daily work of a couture house: sketches, polaroids and toiles. It was small but beautiful, with an absolute highlight being the ability to walk through Saint-Laurent's atelier as it had been used during his life. 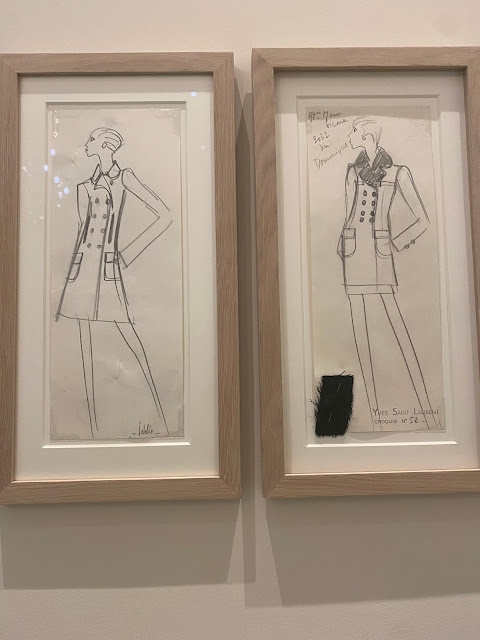 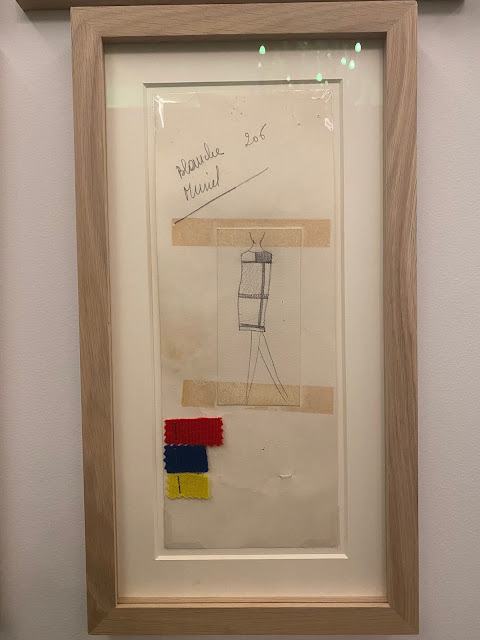 Sketches, some with swatches, including the Mondrian dress 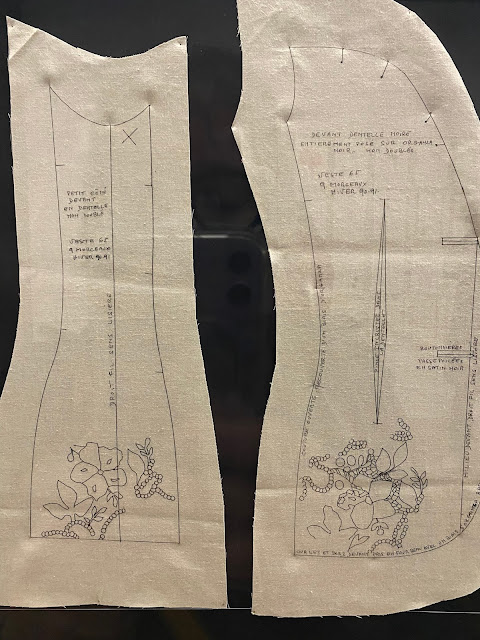 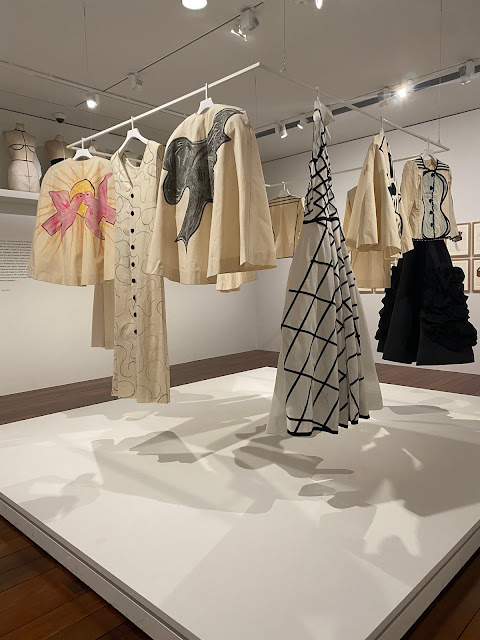 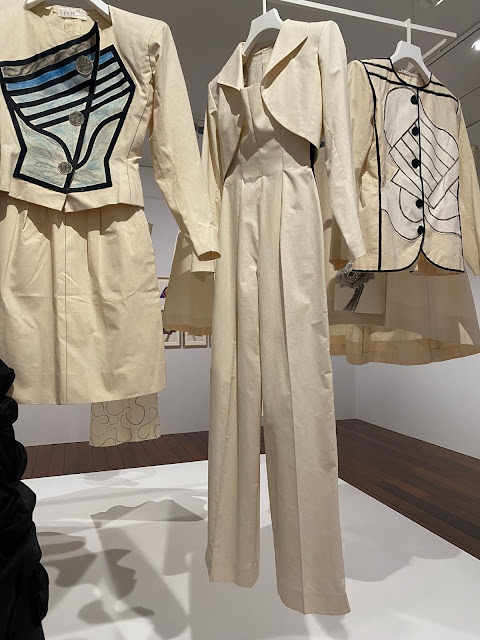 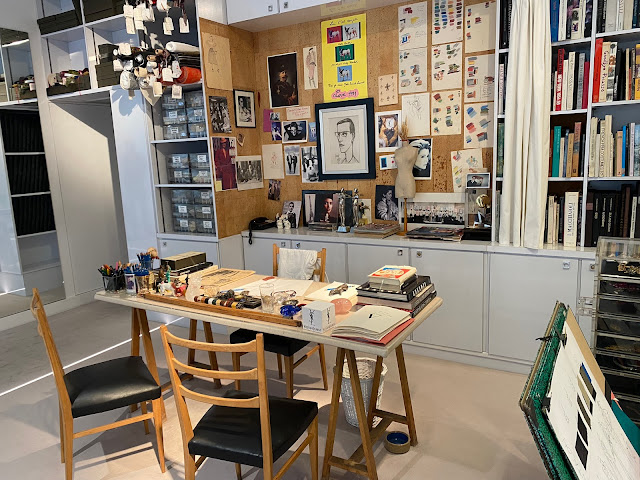 The atelier
Being in a museum worked up a thirst, so we retired to Harry's New York Bar for cocktails. We had never been there before and it was a real treat: home of the French 75! 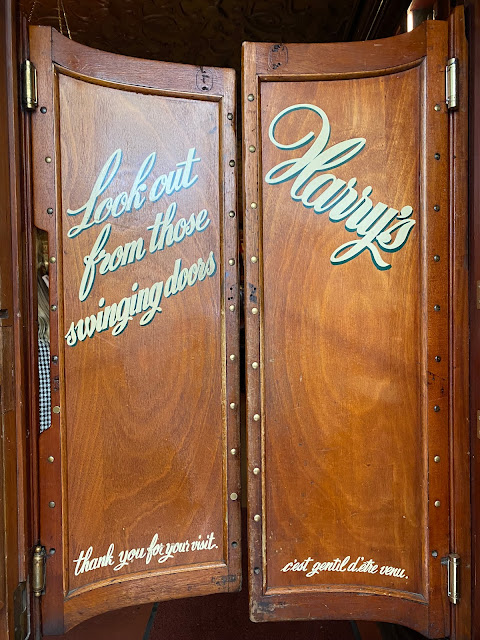 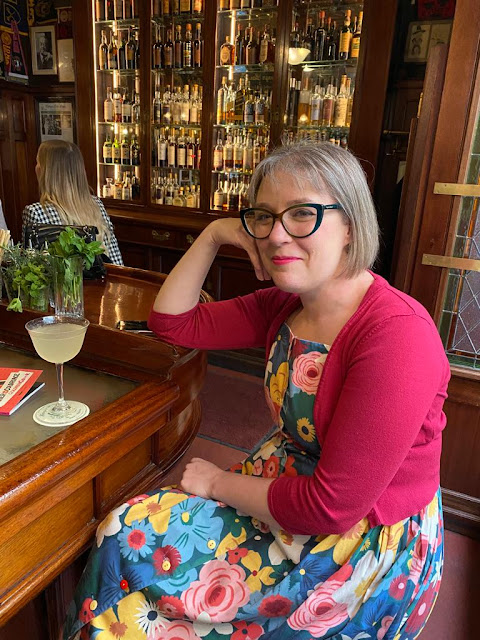 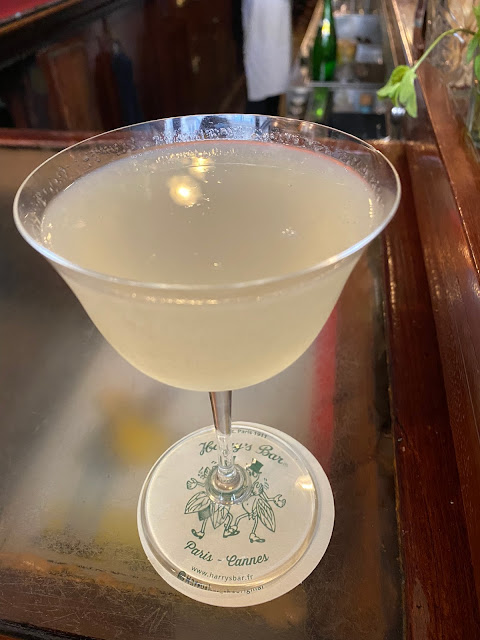 Anyway, I won't share every single photo I took when we were there! Suffice to say, we had a beautiful time and it felt very emotional to return. I even managed some fabric shopping - for the first time, really, since 2019. I bought a few pieces of fabric in the Marché Saint-Pierre and a couple of lovely bits of Ankara fabric in the small shops in la Goutte d'Or. That was wonderful because it's hard enough to find in Ireland but of course you're spoiled for choice in this part of Paris! 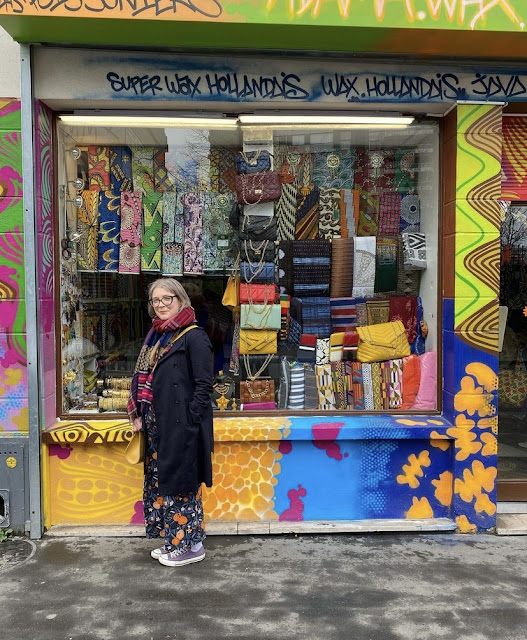 Apart from some stress getting through the airport at Orly to come home (partly our fault, partly shortages of staff on security, partly just... airports) it was a really wonderful visit and we are tentatively planning to get back for a few days towards the end of June to coincide with a friend being there.
I haven't been doing lots of sewing but I did have a new handmade dress to wear on holiday! At the end of February/beginning of March I bought the Cuff dress pattern from The Assembly Line and made a frankly disastrous attempt at making it from some otherwise lovely viscose. It came out absolutely, hilariously huge... I'm not sure how it turned out so massive on me! I chalked it up to having made an expensive mistake (the pattern alone cost almost €30!) but after talking it through with some Dublin sewing people at a meetup, I resolved to give it another go in some more stable cotton. 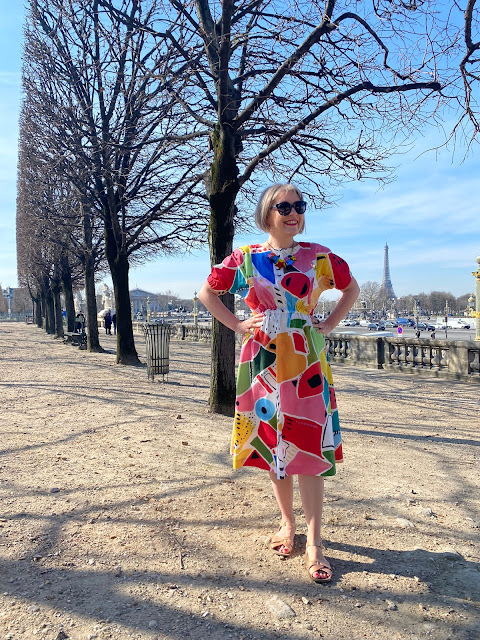 Things Called Jazz dress - The Asssembly Line patterns Cuff dress in Nerida Hansen cotton sateen with Saltwater sandals
So this is actually a very simple pattern and it is designed to have quite a lot of wearing ease, so part of the issue with my first attempt was that there was more ease than I like and this was emphasised by the viscose. For my second attempt, I sized down to the XS and used some Nerida Hansen cotton sateen that I had in my stash. I shortened the bodice quite a lot - by around two and a half inches - and this also made a big improvement to the fit. Otherwise I sewed this pretty much out of the envelope, although the elastic I used was slightly less wide than the pattern called for. 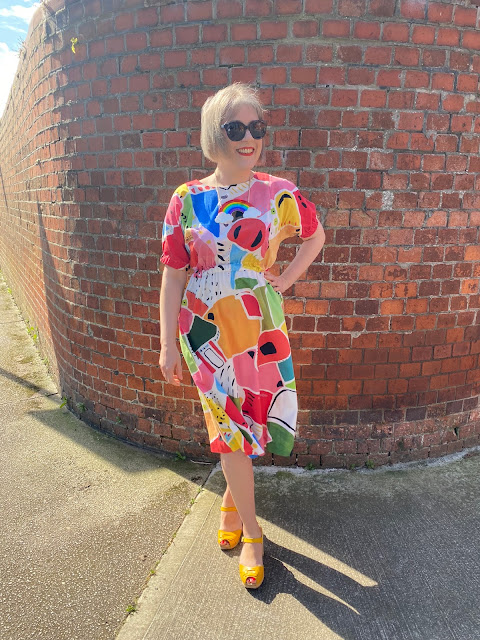 I don't typically enjoy wearing an elasticated waist, so I'm not sure what drew me to this pattern. I'm aiming for big, soft and colourful in my sewing this year and this pattern met that brief! I'm not 100% sold on the elastic at the waist aesthetically but it's very comfortable. I love the sleeves, though! They have a little volume and I think the elastic cuff looks very cool as well as being very comfortable, because it doesn't sit tight to the skin. 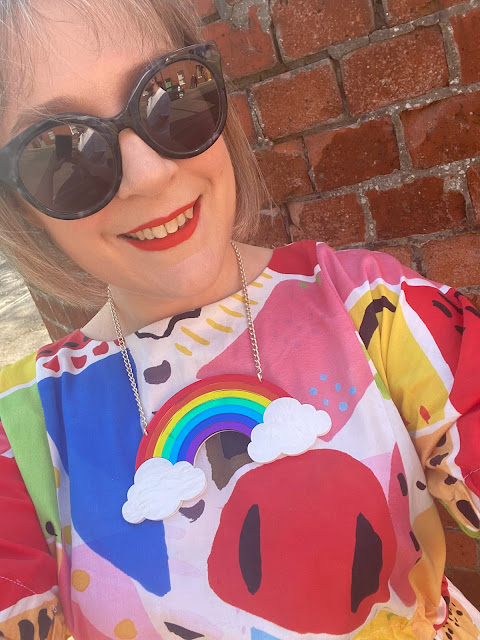 The fabric had been in my stash since late 2020, when I bought it from Neko Neko Fabrics. It's such a fun print and it gives me very 90s vibes, especially when combined with this shape! I had very low expectations going in and figured that I wouldn't be upset if it didn't work out as I wasn't overly attached to the fabric. But I like it a lot and have worn it a fair few times since I made it. I'll have to try to make another one to get the value out of that pattern, as it was so expensive! But I am very happy with this.
I also did a little bit of alteration. I bought a Justine Tabak dress secondhand on someone's instagram sale because I liked the fabric and also because it was a ridiculous bargain (I got it for €35 and new it would have been almost €300!) It was a couple of sizes too big, but a very relaxed shape so I figured it would be easy enough to alter. And it was! I took it in at the side seams and took some volume out of the sleeves and I've worn it a fair few times since then: 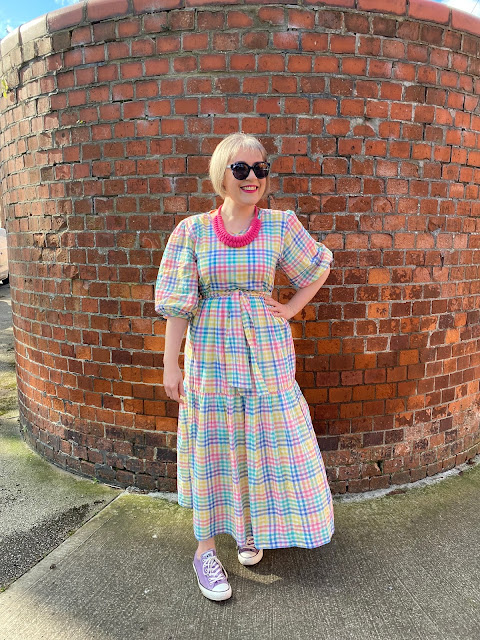 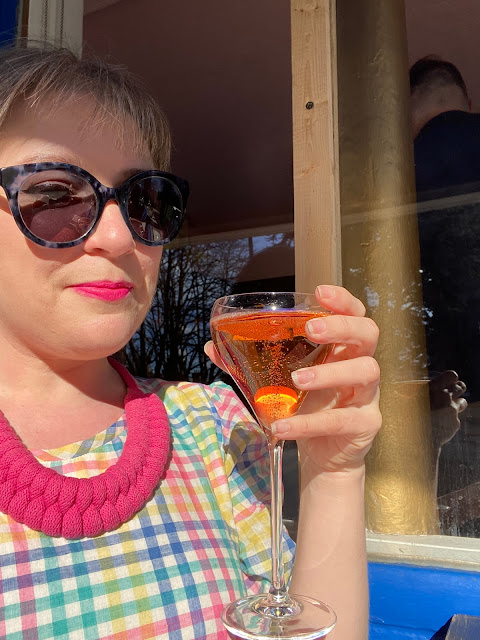 This is very different for me! The pastel colours and the shape of the dress are a little out of my comfort zone, as is the fabric belt, but I like it a lot. It's soft and bright and comfortable and it has definitely inspired me in some of the other things I want to make this spring and summer!
Anyway that's all the craic from me for now, so I'm going to leave you with a photo of me and Nic being cute on St. Patrick's Day on our walk along the coast to Blackrock: 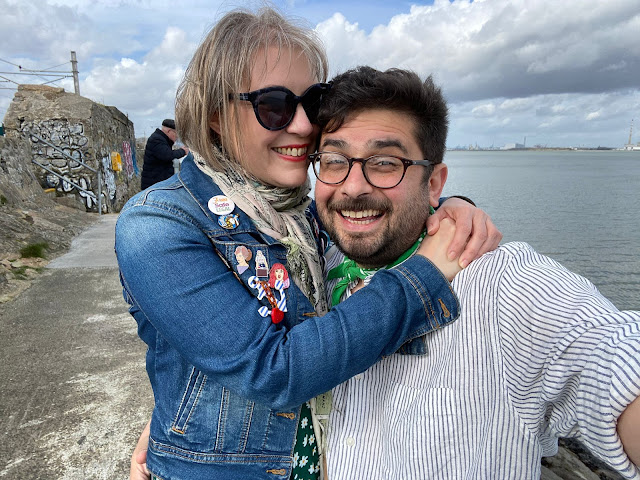 Until next time, folks!
Posted by Roisin Muldoon